The number of patients waiting more than a year for routine operations on the NHS has hit its highest level since April 2008, official figures showed today.

Almost 225,000 people had went at least 52 weeks without treatment in December, according to NHS England.

For comparison, the figure was below 2,000 for almost every month in 2019, before Britain’s health service was slammed by the first wave of the Covid pandemic.

Surgeons today warned tens of thousands of patients waiting to be seen will be in excruciating pain and be unable to get on with ‘day-to-day family life or work’.

Leading medics said the shocking data revealed the ‘enormous toll’ of coronavirus on the health service, and said they really ‘hit home what shape the NHS is in and how long the road to recovery is going to be’.

Separate NHS data today also showed the number of A&E attendances is still below levels last year, with thousands choosing to stay away from hospitals over fears of catching coronavirus.

Despite the gloomy figures laying bare exactly how much the NHS struggled during the second wave, the number of Covid patients in hospitals is still falling rapidly.

Department of Health figures show there were almost 27,000 infected Brits needing hospital care on February 8, the most recent day figures are available for. In contrast, the figure almost topped 40,000 during the darkest days of January.

But there are still more coronavirus patients on wards than during the worst spell of the first wave. 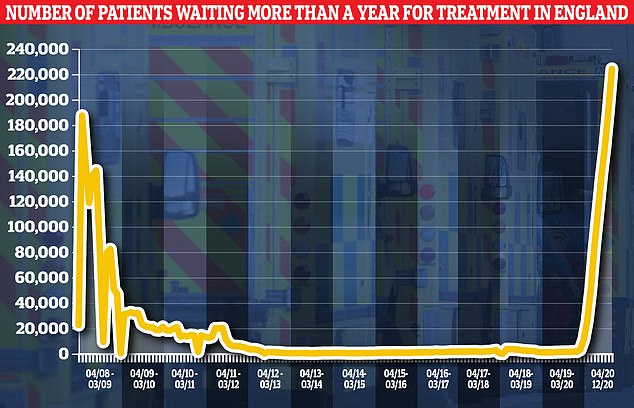 The number of patients waiting more than a year for surgery hit the highest levels since April 2008 in December, NHS England figures published today show 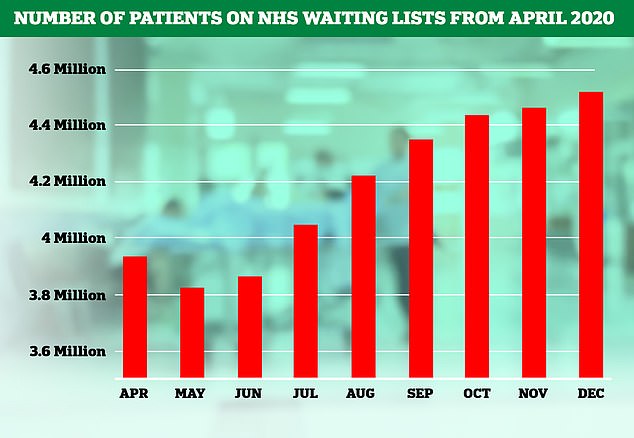 The number of patients on NHS waiting lists hit 4.52million in December, the highest number since records began in August 2007

WOMAN, 52, HAS BEEN WAITING MORE THAN A YEAR FOR FOOT SURGERY TO TREAT ARTHRITIS 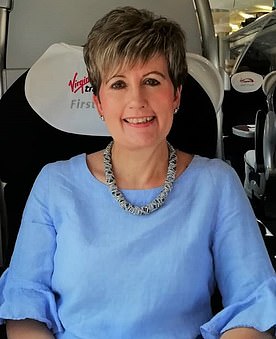 Donna, 52, from Lancashire, is left in agony ‘every single day’

Donna, 52, from Lancashire, is left in agony ‘every single day’ with rheumatoid arthritis and osteoarthritis and was due to have reconstruction surgery on the front half of her right foot.

She agreed to have surgery in December 2019 but her pre-op appointment was cancelled due to Covid-19 and she is still waiting for a referral.

Donna revealed how the pain is ‘constant’ and has been recommenced ibuprofen which she describes as ‘putting a plaster over a gaping wound’.

‘The pain isn’t something that affects me every now and then, it’s a problem every single day,’ she explained.

‘Imagine two pebbles grinding against the bone in your feet. It’s constant. It causes a lot of problems in my life, physically and mentally.’

Donna explained how she had prepared herself for surgery but was left in tears when she was told in was put on hold and often feels ‘really down’.

‘I psyched myself up for having the surgery, so the day I was told nothing would be happening, I was so upset. I work from home at moment and some days my husband comes home and I’m crying, feeling really down,’ she said.

Donna said she sometimes able to go for a short walk on days when the pain is less severe.

The vice president of the Royal College of Surgeons, Tim Mitchell, warned Covid-19 continues to inflict an ‘enormous toll’ on hundreds of thousands of people who are waiting for operations.

‘The number of people waiting over a year for their treatment is now 150 times higher than in 2019,’ he said.

‘Many are waiting “in limbo”, reliant on painkillers, and unable to get on with day-to-day family life or work.

‘These figures show the impact on the NHS of lifting the November national lockdown.

‘By Christmas some surgeons were facing the awful job of calling up patients waiting for cancer operations, to tell them they weren’t sure when they would have a bed or the staff in place to operate.’

He added: ‘After a gruelling December, we’re beginning to see infection rates coming down in parts of the country, thanks to the January lockdown.

‘However, many staff are burnt-out from what has been a brutal and traumatic year. They will need time and support to recover.

‘Looking ahead to spring, we need a “New Deal for Surgery” with investment in hospital beds and staff, to begin to address the massive backlog of patients still waiting for their operations.’

The immediate past president of the Society for Acute Medicine, Dr Nick Scriven, said today the figures showed ‘just how much pressure hospitals are under’.

‘This data really hits home what shape the NHS is in and how long the road to recovery is going to be,’ he said.

‘A&E figures show the worst 12-hour performance since data started and only 70 per cent of type 1 patients (most urgent) seen within the four-hour target despite attendances being down by 40 per cent.

‘This shows just how much pressure hospitals are under during the time period shown with the Covid wave in full force and demonstrates how much effect keeping people safe from cross infection means to time-based targets.’

He added the NHS is ‘exhausted’ by the pressure, as he called into question Matt Hancock’s plans announced today to ‘reorganise’ the health service.

‘Hospitals are still miles away from what would have been considered “normal” levels of acuity and dependency for people in inpatient beds. It will take weeks if not months of hard hard work to get things back to “usual parameters”.’

The head of policy and public affairs at Versus Arthritis, Tracey Loftis, warned it was important not to forget that thousands are enduring longer waits for surgery as they suffer severe pain.

‘While it is understandable that elective operations have had to be postponed during the ongoing pandemic, we must not forget that thousands of people are enduring longer waits for surgery such as joint replacement. They are often in severe, debilitating pain; their lives put on hold,’ she said.

‘Delays to treatment can risk serious physical and mental health implications. It is vital that people waiting for joint replacement surgery receive clear communication about their care, as well as support and advice on pain management and mental health and wellbeing, so they are as well as they can be when surgery does safely resume.’

A former care worker, 71, had his hip replacement surgery cancelled two days before in March last year due to Covid-19 and was told he had been taken off the waiting list in December.

Chris, who was diagnosed with arthritis in his right hip in 2018, has been left ‘virtually housebound’ because of the constant ‘excessive pain’.

He will now have to go through the whole process again starting with a consultation despite suffering for the last three years.

‘My mobility is nearly zero as a result of the excessive pain,’ Chris explained.

‘It never stops; it is just constant. I’m now using two crutches to get anywhere and am virtually housebound.

‘I can’t drive or even get into a car and have needed adaptations in the house to help me get up and move around. It’s the simple things.’

He described how the hospital confirmed his fears that he had been removed from the waiting list on December 3, adding: ‘It really does look quite helpless.’

‘I now have to go through the whole process again, starting with a consultation with a surgeon.’

Speaking about the toll on his mental health, Chris added: ‘I get no communication from the hospital and I have been suffering in pain for the last three years, so I really understand now how depression can set in.

‘Even in January, when hospitals admitted almost a third of all the Covid patients they have treated during the pandemic, they were treating twice as many patients with other conditions as they did for those with the virus over the month,’ he said.

‘But the NHS remains under significant pressure so it is vital that everyone continues to do all they can to stop the spread of the virus by staying at home and following the expert ‘hands, face, space’ guidance.’

An NHS spokesman added that there was also a 40 per cent fall in waiting times for non-urgent care.

It comes as the Health Secretary pledged to make the health service better after the pandemic with ‘bureaucracy busting’ plans to pull hospitals, GPs and social care together.

Mr Hancock will publish a white paper today outlining how the health service will be divided up into ‘integrated care systems’ across England.

It will also give the Department of Health controlling power over the NHS, with its current chief executive Sir Simon Stevens expected to resign by the end of this year

Mr Hancock, who has been criticised for launching wide-ranging changes to the health service during one of the toughest periods in its history as it battles the Covid-19 epidemic, said now was the right time because it would take so long to get the plans approved and put them into action.

The Government has pledged to ‘bust bureaucracy’ in the health service and the plan could see England’s 152 major hospital trusts and 135 clinical commissioning groups, which control GP practices, condensed down into 42 boards to control all local health services with one massive budget for each area.

Ideally this will mean long-term sick patients – of whom there are a constantly growing number as the population ages – will be able to move seamlessly between family doctors, hospitals and care workers. Currently these services are separated.

The reform will also remove the need for NHS bodies to offer up expensive healthcare contracts to private companies and allow them to keep them in-house.

Previously, contracts worth more than £615,000 had to be put through a tendering process meaning private companies could get them if they undercut NHS prices. Unions said this was in danger of turning medical care into a competitive market.

On the surface this looks to be a step away from privatising parts of the health service, although critics said it wasn’t clear whether it would definitely have that effect. Labour pointed out private contracts could still be drawn up if desired.