Nigerian migrants return from Libya back to square one

Even after experiencing horrible treatment and conditions, almost half of West African migrants returning home from Libya say that they will try to reach Europe again.

Nigerian officials are calling for more international cooperation in the fight against human trafficking, as the country continues to evacuate its citizens from Libya.

Earlier this month, the Nigerian government began the immediate removal of some 5,500 people from the North African country after reports of abuse, slavery and torture.

Large numbers of Nigerians were among thousands of migrants trapped in Libya in their attempt to escape war and economic hardship in their home countries and reach Europe.

Many have been exploited by human traffickers as they attempted to pass through war-torn Libya in a bid to reach Italy by sea.

Muhammad Babandede, head of Nigeria’s immigration service, said there needed to be a joint effort to tackle the problem.

“It’s frustrating that we, as countries, are not working together, including Europe,” he told Al Jazeera.

“It takes more than returning, it takes more than publicity to do this. We need to work together at the source, transit and destination countries to deal with the criminal groups,” added Babandede.

The evacuation process began after Nigerian officials on a fact-finding mission to Libya expressed shock at what they saw and heard from victims.

“There were obviously interests that wanted to keep as many of them there as possible because they were commodities.”

Despite their ordeal, however, many Nigerians said they planned to try to make the journey again.

Osaretin Vincent was one of them, telling Al Jazeera that his destiny lies in Europe.

“I have sold almost everything I have to embark on this journey but now I am going back home like a madman,” he said.

According to Nigerian officials, as many as 45 percent of migrants deported from Libya attempt to return in hopes of making it to Europe.

“As a human being, you’d assume the most important goal in life is to preserve life and knowing that I’ve come so close to what I’ve seen [in Libya] I wouldn’t go,” said Frank Celestine, from Nigeria’s International Office for Migration.

“But survival is also important to a person. If you are in a place and you don’t see a future, then that pushes you,” he told Al Jazeera.

Libya is the main gateway for people attempting to reach Europe by sea, however there is no registration process in place for the arrivals and detention centres in some parts of the country are unsupervised.

In these conditions, human trafficking has flourished, with reports of humans being sold in modern-day slave markets.

According to Al Jazeera’s Ahmed Idris in the Nigerian capital, Abuja, geography also contributes to the problem.

“Government officials in West Africa admit that their vast, porous borders makes it difficult to stop what they call ‘irregular migration’,” he said.

“Border police feel powerless to make arrests because of the existent pact that guarantees freedom of movement of goods and people”.

This agreement has been exploited by traffickers and undocumented migrants, according to Nigerian officials.

The UN’s International Organisation for Migration said 171,635 migrants and refugees entered Europe by sea during 2017, with nearly 70 percent arriving in Italy.

The remainder were divided among Greece, Cyprus and Spain. 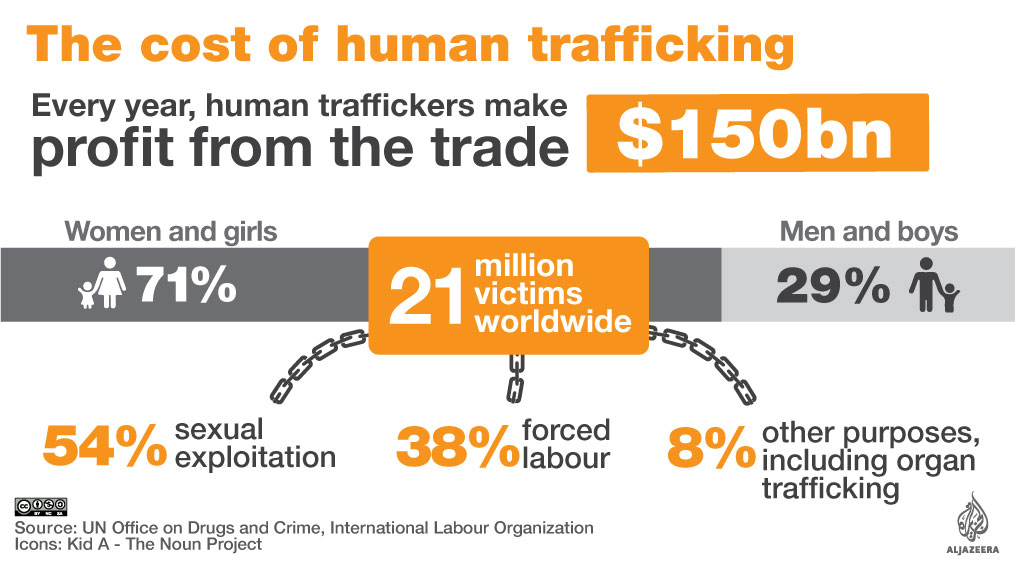