No deal Brexit could spark a recession in Britain that spills over into the global economy, international think tank warns

Britain could be tipped into a recession that could spill out across the global economy under a severely disruptive no-deal Brexit, a major international organisation warned today.

The Organisation for Economic Co-operation and Development (OECD) said a no-deal withdrawal would knock around 2 per cent off UK growth over the next two years, but cautioned the effects would be ‘stronger still’ in a disorderly exit from the EU.

It would likely spark a UK recession – two or more quarters of negative growth in a row – which could cause a ‘major adverse shock’ in the EU and beyond, it said.

The forecasts will fuel demands on Chancellor Philip Hammond to further shore up the economy at his Spring Statement next week.

Most forecasts of the impact of no deal have softened as exit day nears on March 29 but nerves are jangling amid businesses with just 23 days to go. 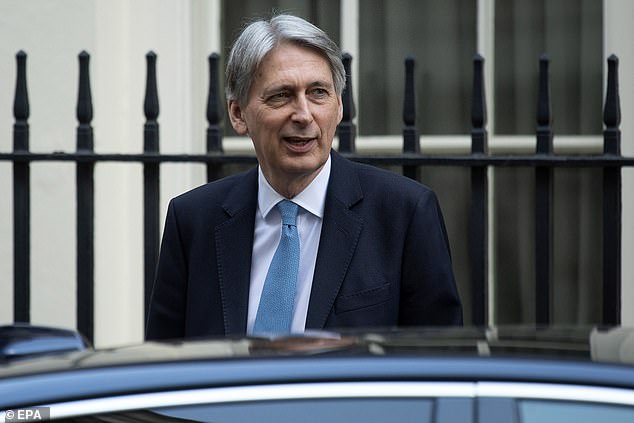 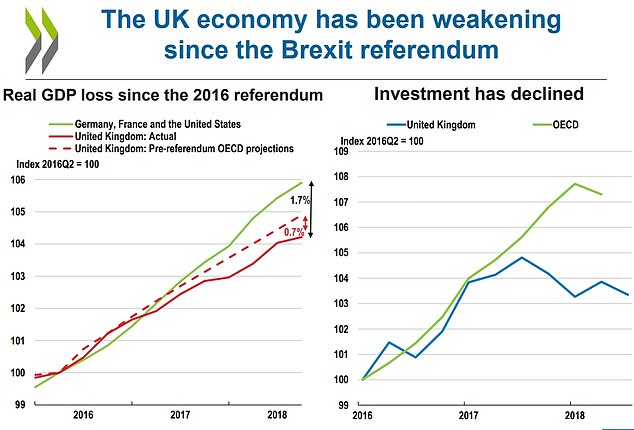 In its latest economic outlook, the think tank forecast a ‘near-term recession’ would be likely if Britain crashed out of the EU on March 29 with a lack of adequate border infrastructure and a loss of access to EU trade arrangements with third countries.

It said if this caused serious bottlenecks in integrated cross-border supply chains it could lead to the twin threat of financial market disruption and plummeting confidence, which would heighten the global impact.

The OECD said: ‘In such a scenario, the likely near-term recession in the United Kingdom would generate sizeable negative spillovers on growth in other countries.

‘Although contingency measures to soften the impact of a no-deal outcome are being taken by both sides, UK-EU separation without an agreement would still be a major adverse shock for Europe and possibly elsewhere in the world, given that the United Kingdom is an important trading partner for many countries.’

The warning came as the OECD also slashed its growth forecast for the UK to 0.8 per cent for 2019 and 0.9 per cent for 2020, down from the 1.4 per cent and 1.1 per cent projected respectively in November.

But this is assuming a smooth Brexit transition.

It urged the Bank of England and the European Central Bank to be ‘ready to intervene’ in event of a disruptive exit.

The OECD forecasts showed Brexit is coming at a bad time for the global economy, which is also losing steam at a rapid rate amid the US-China trade war and slowing Chinese growth.

It made growth downgrades in nearly all G20 economies and called for ‘coordinated policy action’ across the globe if the slowdown is sharper than expected. 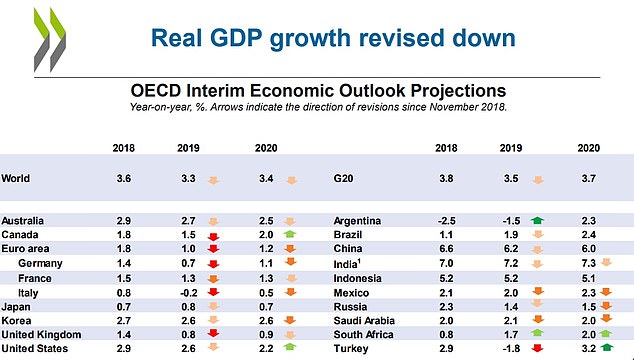 ‘Preparing for such an eventuality now by planning growth-enhancing measures, including additional structural reforms, that can be rolled out rapidly would increase the effectiveness of any coordinated policy response,’ it added.

Its sober outlook showed Italy in recession this year, contracting by 0.2 per cent, while it more than halved the forecast for Germany’s growth to 0.7 per cent.

Overall, it is pencilling in growth of 1 per cent across the euro area, down from the 1.8 per cent predicted in November.

It comes after the Bank of England warned on Tuesday that EU authorities still needed to do more to help prevent disruption from a disorderly divorce, which could impact families and firms across Europe and potentially cause knock-on effects in Britain.