Bank of England boss Mark Carney has said the UK’s Brexit preparations have reduced the economic damage that could follow a no-deal withdrawal.

The governor said there had been ‘progress in preparedness’ that has reduced the level of ‘economic shock’ forecast if Britain crashes out of the European Union without a deal.

He told peers on the Lords Economic Affairs Committee that border agreements, the rollover of trade agreements and progress in the derivative markets meant the impact of a no-deal exit would be less severe than the Bank predicted in November.

But Mr Carney said a disorderly Brexit would likely still be a ‘material economic shock’.

In November, the Bank warned Britain would be tipped into a recession worse than the financial crisis in the event of a no-deal disorderly Brexit – and warned that the worst-case scenario could lead to Britain’s GDP falling by 8 per cent. 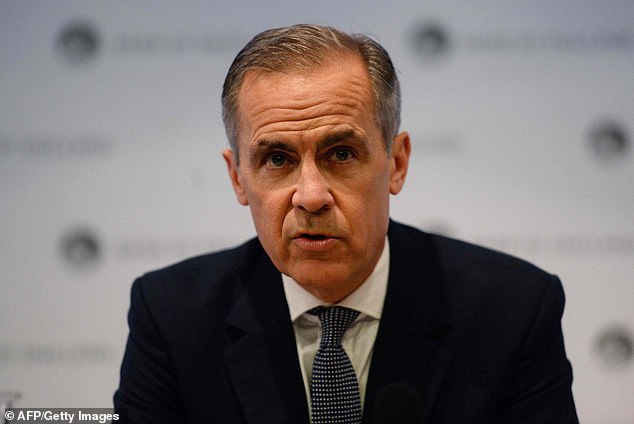 However Mr Carney told the committee on Tuesday that recent developments meant the contraction may be 2 per cent to 3.5 per cent lower.

And he said: ‘Since we released those scenarios in November there have been some constructive developments in terms of preparedness – some of them have been detailed over the course of the last few weeks in terms of broader parliamentary testimony.’

Mr Carney explained: ‘If you took the scenarios that we had for a no-deal Brexit and you referenced the disruptive and the disorderly, and it depends what your counterfactual is – so what are we comparing it to – if we compare those as we did in November to our forecast of the economy at the time which presumed something broadly consistent with the Prime Minister’s deal… the potential hit to GDP was just under 5 per cent in the disruptive and just under 8 per cent in the disorderly.

‘The items I indicated earlier, given our modelling of the situation, would pull back somewhere between 2 per cent to 3.5 per cent of those losses depending on the scenario.’

He added: ‘There has been progress in preparedness and that reduces the level of the economic shock.’ 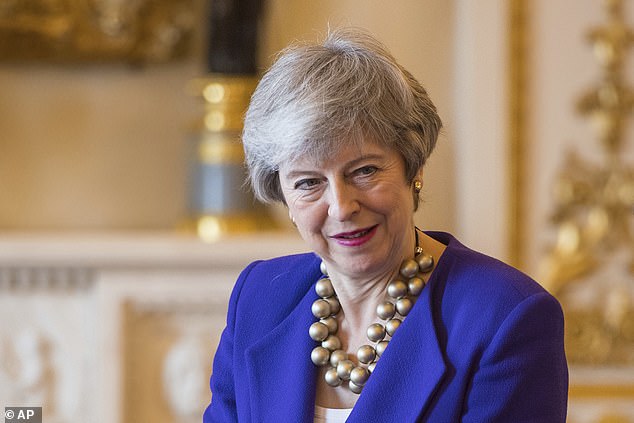 The governor said there had been ‘progress in preparedness’ that has reduced the level of ‘economic shock’ forecast if Britain crashes out of the European Union without a deal. Pictured: Theresa May last night

No deal, no avocado! How a hard Brexit could affect British diets with the UK swapping tea for whisky, and EU-fished cod for LOBSTER and chips (and could see the return of the duty-free booze cruise)

The dramatic changes that could be forced on Britain’s diet by a no deal Brexit were revealed today.

If the UK crashes out of the EU later this month there is expected to be disruption at the Channel ports where tonnes of food is shipped into Britain every day.

The nation produces huge amounts of food and drink every year – enough to fuel the 65 million people who live here – but 40 per cent of what we eat is imported.

Many of people’s favourite food and drink comes from across the continent – with shortages likely in fruit like avocados and bananas, vegetables like broccoli and tomatoes, and even the grain needed to make pizza dough.

Instead expect to eat lots of eggs and drink gallons of milk, with peas and carrots on the side according to research by Bloomberg.

While the news is bad for millennial lovers of avocado toast – the changes could see Britons munching on home-sourced lobster over cod, knocked back with Scottish single malt whisky instead of EU wine.

Even tea and coffee could be slow to enter the country if borders are busy. Most tea and coffee drunk in Britain is produced overseas and imported via Europe.

But in a silver lining for travellers, the Government has vowed to bring back duty free shopping on alcohol and tobacco bought in Europe – ending a 20-year Brussels crackdown.

A survey today revealed as many as one in ten shoppers have stockpiled food ahead of Brexit day on March 29. 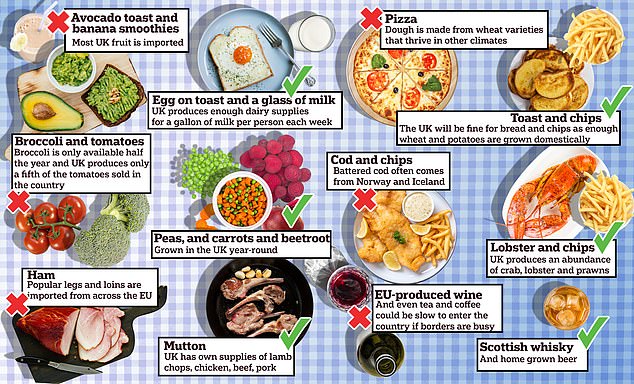 SWAP Avocado toast or banana smoothies: Most of UK fruit is imported – meaning just a handful of strawberries per person each year and no bananas until trade links open back up.

FOR Egg on toast and a glass of milk: UK produces enough dairy supplies for a gallon of milk per person each week. Normal bread is easy to make as Britain grows tonnes of grain. 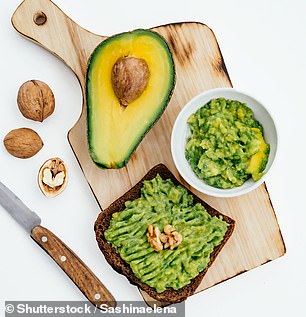 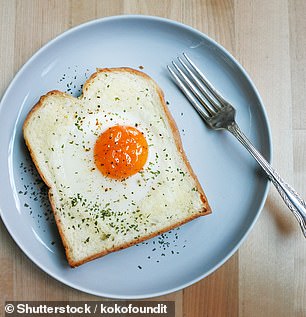 Many of people’s favourite food and drink comes from across the continent – with shortages likely in fruit like avocados and bananas. Instead of millenial favourite ‘avocado toast’ the UK could have to swap the superfood for plain old eggs

SWAP Broccoli and tomatoes: Broccoli is only available half the year and UK produces only a fifth of the tomatoes sold in the country – meaning they would have to become a treat.

FOR Plenty of peas, and carrots and beetroot which are grown year-round 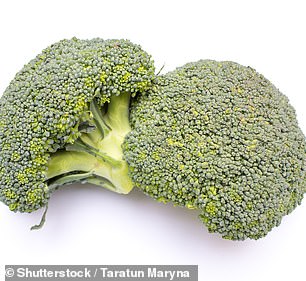 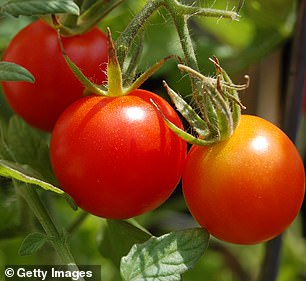 Broccoli and tomatoes: Broccoli is only available half the year and UK produces only a fifth of the tomatoes sold in the country – meaning they would have to become a treat

SWAP Ham: popular legs and loins are imported from across the EU

FOR Mutton: UK has own its supplies of lamb chops, chicken, beef, pork (and it’d keep all the extra livers it currently exports) 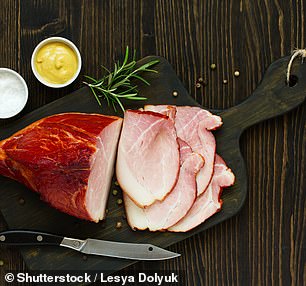 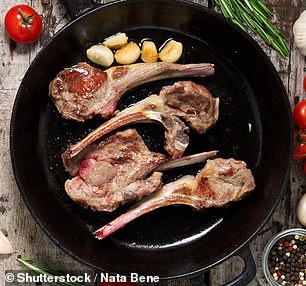 Popular legs and loins are imported from across the EU including those used in ham.  The UK has its own supplies of lamb chops, chicken, beef, pork – and could be left with more offal such as liver which is currently exported out of the country

A former head of MI6 has said a no-deal Brexit puts Britain in a stronger position than Theresa May’s deal.

In a stinging attack, Sir Richard Dearlove called the Prime Minister’s deal ‘disastrous’, adding it offers ‘no tangible benefits’ for Britain and will lead to ‘no control over EU migration’.

In a letter to the Daily Telegraph, Sir Richard – alongside 33 other signatories including leading businessmen and academics – urges MPs to reject Mrs May’s deal and vote for Britain to exit the EU without a deal on March 29.

It states: ‘The Withdrawal Agreement is disastrous. It ties us to European Union rules without any say in drawing them up or any possibility of independent arbitration.

‘New trade agreements would be restricted. We would continue to pay £10billion a year. There would be no control over EU migration.

‘There would be no tangible benefits to show from Brexit…it is not a solution: it is a prolongation of the agony.’

It goes on to say that a no-deal Brexit, in stark contrast, will ‘allow us to cut unnecessary tariffs, reduce costly regulation, save on budget contributions and sign beneficial trade deals’.

It is not the first time Sir Richard, 74, a prominent Leave supporter who headed the MI6 from 1999 to 2004, has fiercely criticised the Prime Minister’s deal.

In January, he signed a letter to Conservative associations saying it would ‘place control of aspects of our national security in foreign hands’.

SWAP Pizza: Dough is typically made from high-protein wheat varieties that thrive in other climates

FOR Toast and chips: The UK will be fine for bread and chips as enough wheat and potatoes are grown domestically

FOR Lobster and chips: UK produces an abundance of crab, lobster and prawns

SWAP EU-produced wine – and even tea and coffee could be slow to enter the country if borders are busy. Most tea and coffee drunk in Britain is produced overseas and imported via Europe.

FOR Whisky from Scotland and home grown beer, both of which are produced in huge volumes by the UK.

The Sun revealed the plans to bring back duty free sales today – saying it would cost the Treasury up to £200million.

The changes will apply to all purchases made in airports, ports and ferries on outbound journeys.

It means Brits going on a holiday to European destinations will be able to make savings by buying alcohol and other UK products before they leave.

Dover MP Charlie Elphicke told the paper: ‘We’ve been fighting hard to ensure that ports and regional airports with flights to the EU get to benefit from duty free sales just as much as Heathrow and Gatwick.

‘This will deliver a big boost for tourism – helping our coastal communities and ferry industry after Brexit.’

Stockpiling plans were revealed by a survey by Kantar Worldpanel, which studies the supermarket sector.

It found one in ten shoppers said there are already stock piling for a no deal Brexit while another 26 per cent were considering it.

MPs are due to vote on whether to adopt a no deal Brexit as soon as next Wednesday, if Theresa May has failed to get support for her deal by Tuesday night. 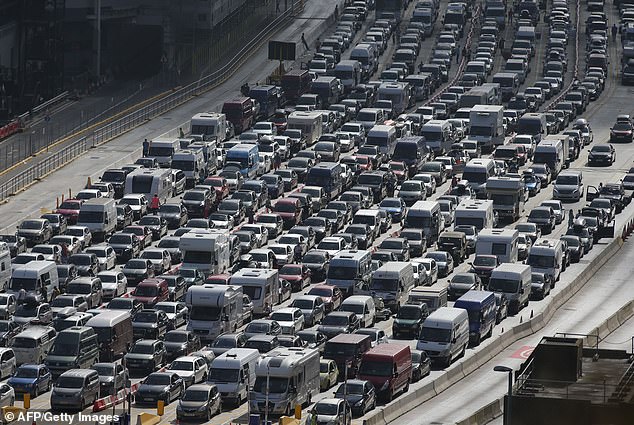 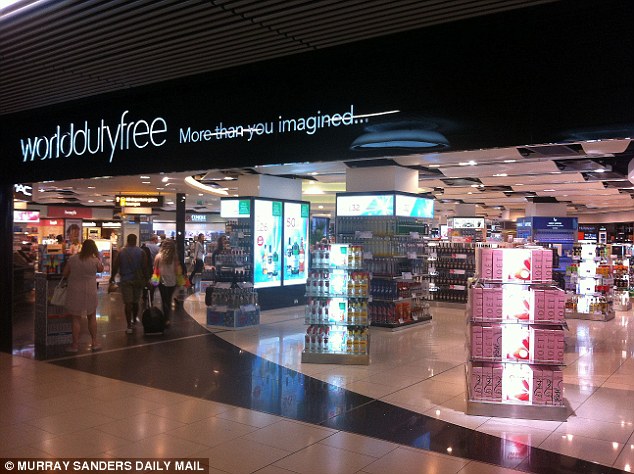