Goyang, South Korea:  North Korean leader Kim Jong-un crossed the border into South Korea for the first time on Friday, where he was greeted by the South's president, Moon Jae-in ahead of the two Koreas' first summit in more than a decade. 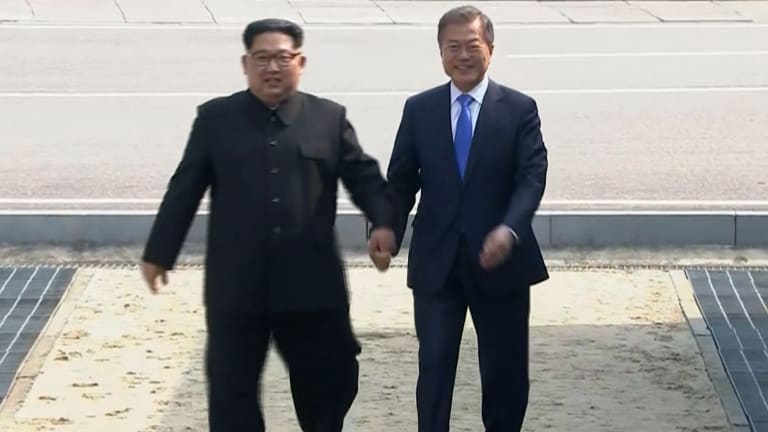 North Korean leader Kim Jong-un, left, crosses the border into South Korea, along with South Korean President Moon Jae-in for their historic face-to-face talks, in Panmunjom, in the DMZ.

The two leaders smiled and shook hands after which Kim Jong-un gestured to Moon they cross over to North Korea briefly, which they did for a few steps, then returned to the South, holding hands.

It was all smiles Friday as Moon grasped Kim's hand and led him along an blindingly red carpet into South Korean territory, where school children placed flowers around their necks and an honor guard stood at attention for inspection. 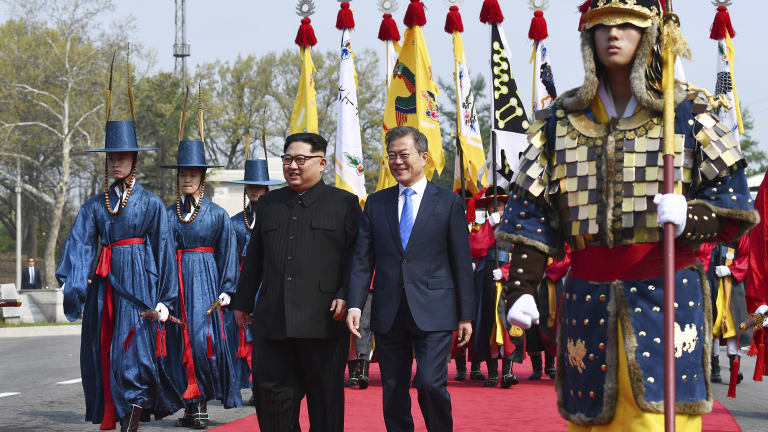 The greeting of the two leaders was planned to the last detail. Thousands of journalists were kept in a huge conference centre well away from the summit, except for a small group of tightly-controlled pool reporters at the border.

Moon stood near the Koreas' dividing line, moving forward the moment he glimpsed Kim appearing in front of a building on the northern side. They shook hands with the border line between them. Moon then invited Kim to cross into the South; Kim invited Moon into the North, and they then took a ceremonial photo facing the North and then another photo facing the South. 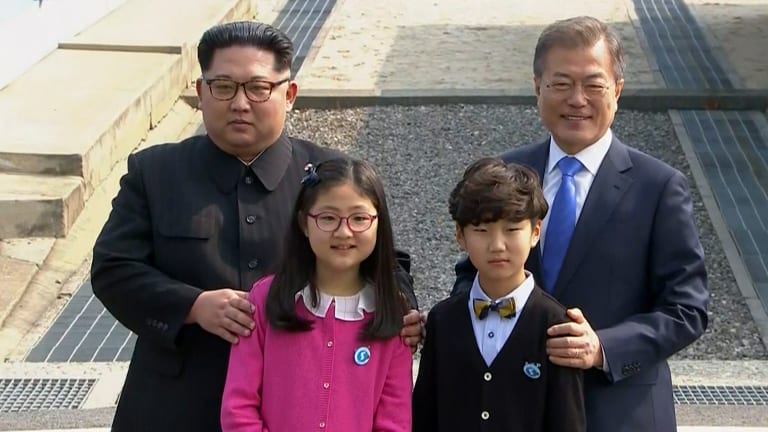 Two fifth-grade students from the Daesongdong Elementary School, the only South Korean school within the DMZ, greeted the leaders and gave them flowers. Kim and Moon then saluted an honour guard and military band, and Moon introduced Kim to South Korean government officials.

Kim returned the favour with the North Korean officials accompanying him. They were to take a photo inside the Peace House, where the summit was to take place, in front of a painting of South Korea's Bukhan Mountain, which towers over the South Korean Blue House presidential mansion.

Nuclear weapons will top the agenda, and Friday's summit will be the clearest sign yet of whether it's possible to peacefully negotiate those weapons away from a country that has spent decades doggedly building its bombs despite crippling sanctions and near-constant international opprobrium.

Expectations are generally low, given that past so-called breakthroughs on North Korea's weapons have collapsed amid acrimonious charges of cheating and bad faith.