Mosque ‘shooter’ smirks in court: Alleged Oslo gunman appears with battered face as it’s revealed police were tipped off about him a year ago

Police investigating a 21-year-old man suspected of an attempted attack in a Norwegian mosque and of killing his stepsister ignored a ‘vague’ tip off a year ago.

He said the informant did not say there were any ‘concrete plans’ for an attack, meaning police had nothing to investigate, the New York Post reported. 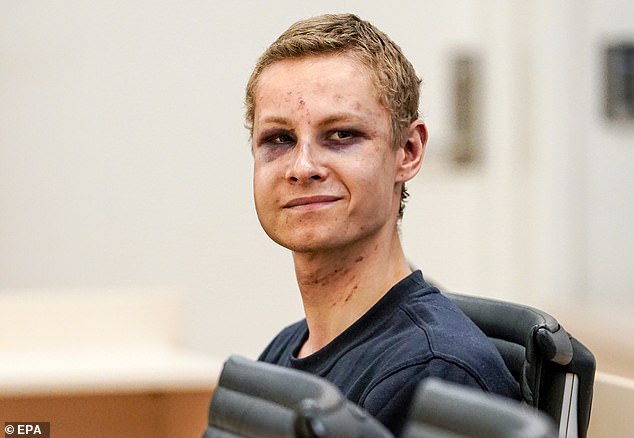 Manshaus is being held in custody for four weeks on suspicion of murder and breach of anti-terrorism law after he entered the Al-Noor Islamic Centre in Baerum, an Oslo suburb, on Saturday.

His lawyers said he does not admit to any crime when he attended his first court appearance in Copenhagen. He did not speak during the appearance but smiled at cameras. It is unclear what caused severe bruising seen on his face.

One person was injured before hero Mohamed Rafiq, 65, managed to restrain the terror suspect with another worshiper until police arrived. 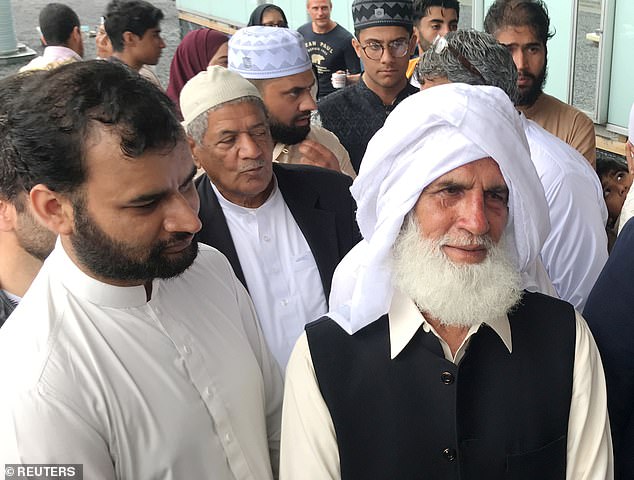 Mohamed Rafiq (right), 65, has been hailed as a hero for restraining the terror suspect and held him down with another worshipper before police arrived, despite being injured in the struggle

Mr Rafiq was among three people inside the al-Noor Islamic Centre when a man burst in with ‘two shotgun-like weapons’ and wearing a uniform and body armour.

Police said the suspect was waving weapons while inside the mosque but did not specify what type.

After reportedly breaking through a glass door, the gunman fired off a number of shots before Mr Rafiq and Mohamed Iqbal, who helped to subdue the suspect, spotted him. 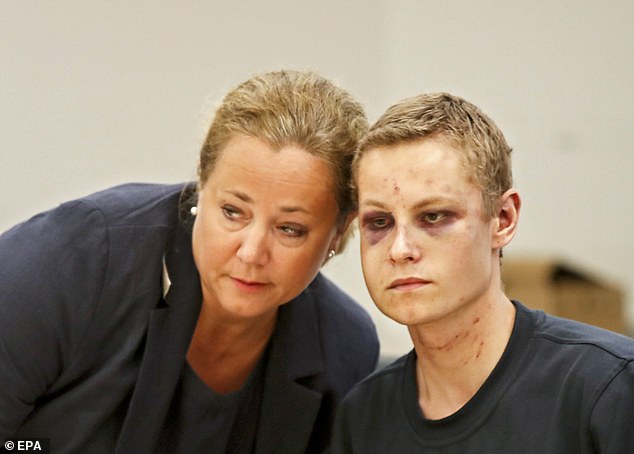 Philip Manshaus (right) is charged with murder and attempted act of terror. He is pictured with his lawyer Unni Fries 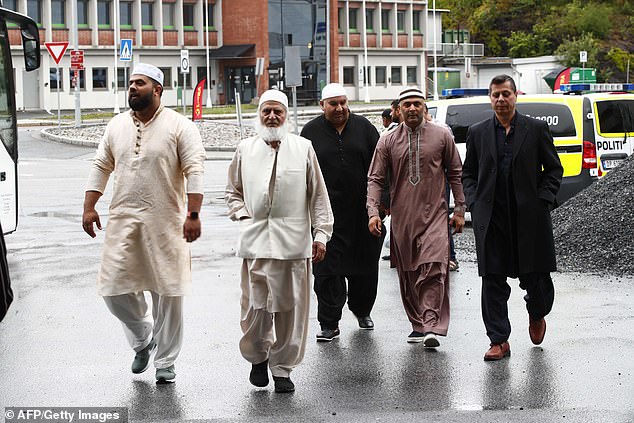 Muslims from the Al-Noor mosque in Baerum arrive at the Thon hotel to attend the prayer during the first day of Eid al-Adha on August 11, 2019 in Baerum near Oslo, one day after a gunman armed with multiple weapons opened fire in a mosque 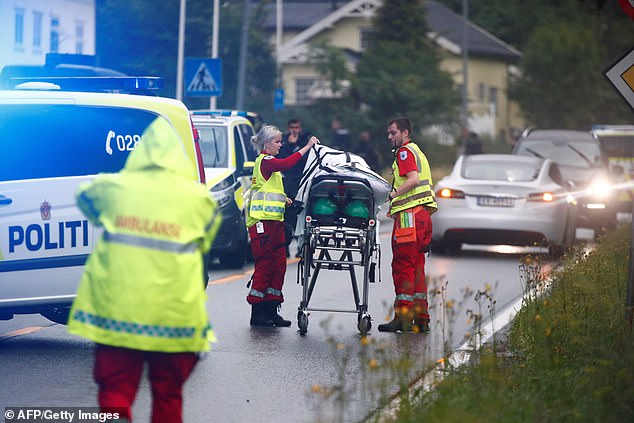 The 21-year-old was arrested on Saturday after he entered the Al-Noor Islamic Center in Baerum, an Oslo suburb. Pictured: Emergency crews with a stretcher after the shooting

Speaking to press outside a nearby hotel on Sunday, Mr Rafiq, who was preparing to celebrate the Islamic festival of Eid al-Adha, said: ‘I’m thankful for all of the help and support I have received.’

The retired Pakistani Air Force officer described struggling with the gunman in an interview with Reuters.

‘He put the finger inside my eye up to there, the whole finger,’ Rafiq said, his face still showing signs of the fight.

He was the only person injured at the mosque despite multiple gunshots being fired, according to police.

Irfan Mushtaq, board member of the mosque, said that minutes before the shooting on Sunday afternoon around 15 people had been inside the building.

The shooting is being treated as an ‘attempted act of terror’ by Norwegian police, with the suspect appearing to harbour far-right, anti-immigrant views.

‘We are looking at an attempted act of terror,’ acting chief of the police operation Rune Skjold told a press conference.

Hours after the attack on Saturday the body of a young woman, identified as the suspect’s 17-year-old stepsister, was discovered in a nearby house in Baerum. 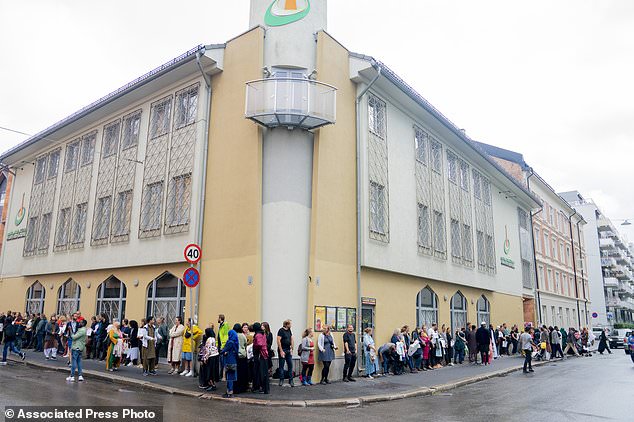 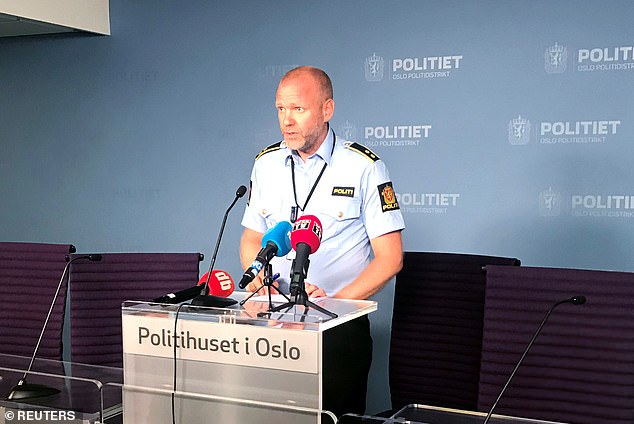 Acting chief of the police operation, Rune Skjold, told a press conference yesterday that the shooting is being treated as an ‘attempted act of terror’ by Norwegian police, with the suspect appearing to harbour far-right, anti-immigrant views

His lawyer Unni Fries this morning declined to comment on Norwegian media reports that the suspect was inspired by shootings in New Zealand, where a gunman killed 51 people in March, and on August 3 in El Paso, Texas, which left at least 22 dead.

Dagbladet, one of Norway largest newspapers, reported that on day of the attack, Manshaus wrote online he had been ‘chosen’ by ‘Saint (Brenton) Tarrant’, the Christchurch gunman.

The name of the Oslo mosque is similar to the one in the New Zealand attacks.

Prosecutors want him held on terror charges for four weeks.

The suspect’s thwarted plans recall those of the Norwegian right-wing extremist who in 2011 killed 77 people in 2011.

Anders Behring Breivik is serving a 21-year prison sentence for carrying out a terror attack.