Notting Hill Carnival should be moved to a Royal park and entry should be PAID FOR: Ex-Met Police chief says event should have security checks and says people are too scared to criticise it for ‘fear being labelled racist’

Notting Hill Carnival should be moved to a Royal park and made a ticket-only with security checks, a former top cop has said, but critics ‘fear being labelled racist’ if they speak out against the event.

But he admitted that senior police figures are reluctant to criticise the Caribbean celebration, which has been taking place on the streets of west London since the 1960s, because of a ‘nervousness’ of being deemed racist.

It comes after the carnival was overshadowed by violence following the fatal stabbing of footballer-turned drill rapper Takayo Nembhard, 21, on Monday.

The Met has also confirmed it is investigating allegations that two female officers were sexually assaulted, with one cop grabbed around the neck and kissed and a second ‘surrounded by a group of men’.

Officers made 209 arrests during the two-day event, while the force also recorded a further six non-fatal stabbings. Some 74 officers were also assaulted.

But Mr Ramm admitted that, even if the carnival was moved, ‘there are people who still want to be violent, to sell drugs and to mark their turf’.

He told MailOnline: ‘From a policing perspective, that [moving the carnival] is a much better situation. But it will be rejected by the community because of the view that carnivals should be held in the street. 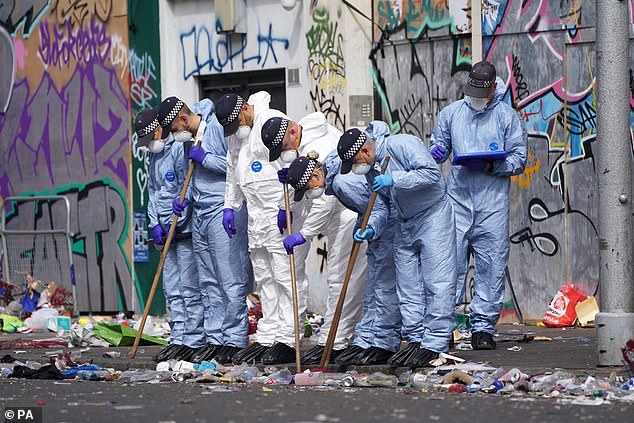 Forensics officers comb the scene in Ladbroke Grove, west London, where 21-year-old Takayo Nembhard, a rapper from Bristol, died after being stabbed 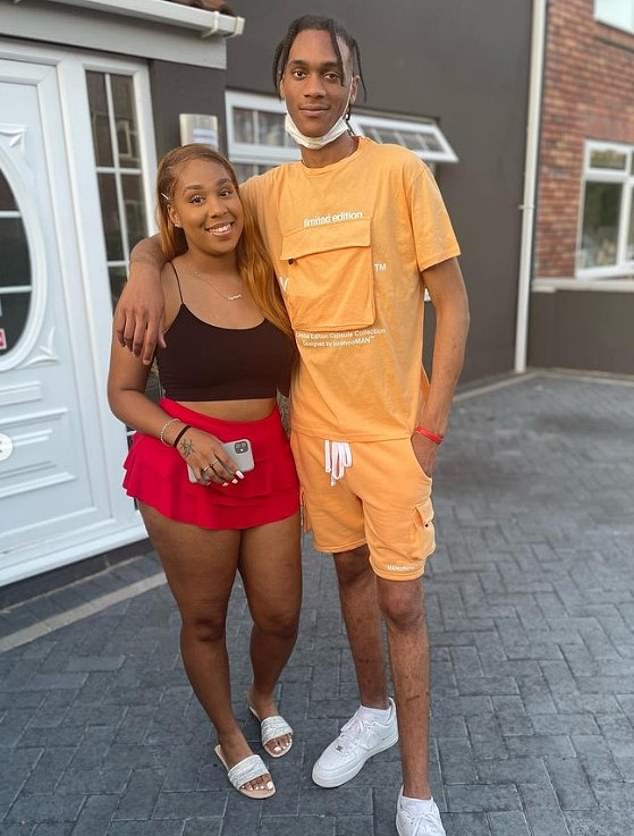 Mr Nembhard (pictured with his girlfriend) was a former youth team player at Bristol Rovers, before turning to drill rapping when he had to retire from football due to an injury 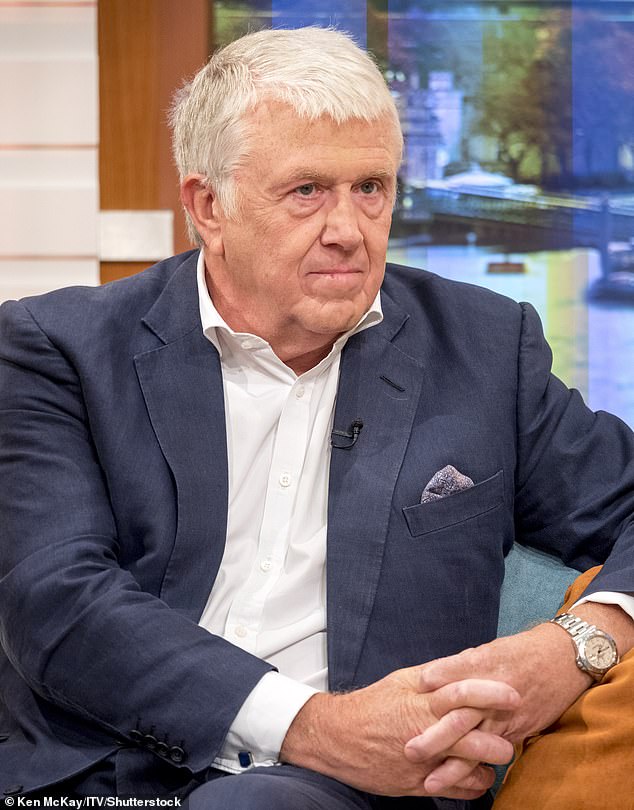 Former top cop Roy Ramm (pictured in 2017) said Notting Hill Carnival is ‘safe for most people’ but noted ‘there is a time, always on the last day it seems, that it degenerates’ 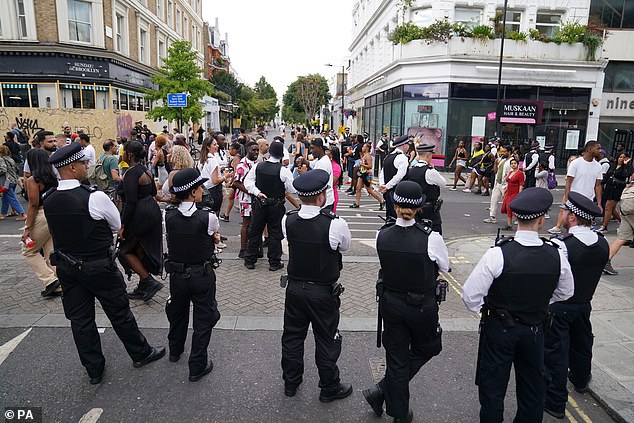 Police officers looking at revellers during the Notting Hill Carnival in London, which returned to the streets for the first time in two years last weekend

‘It would be very nice – you could charge entry fees and generate revenue. The danger is that you would likely have rival events started up back on the streets.

‘I have investigated serious crimes that have taken place at Notting Hill Carnival and policed the poll tax riots, so I know how difficult it is to police an event on the streets. It would be suitable to move it.’

It comes after Met Police Federation chair Ken Marsh, who represents 30,000 officers in the force, earlier said this week that his colleagues ‘dread’ policing the event.

Mr Marsh is leading calls for the carnival to be moved to another venue such as Hyde Park, where it can be ‘a lot more easily controlled’.

Meanwhile, Mr Ramm agreed that ‘the best way’ to hold the carnival would be at ‘one of the Royal parks’.

He added: ‘Police have worked with legitimate organisers and the council to try and make it work for public safety.

‘The best way to hold it would be at one of the royal parks. Obviously if you go too far away from Notting Hill it would lose credibility. You could have entry checks, security, it would be easier.’

Mr Ramm also spoke of fears in policing circles of criticising the event, but said: ‘It does not help the community not to tell the people about what exactly is going on.’

He added: ‘Yes I do think there is nervousness and we are seeing it in policing. There are chief constables across the country who have not spoken out on crimes because of it [the fear].’

And he also slammed Sadiq Khan’s praise of the event, saying: ‘Sadiq Khan said the carnival was an impeccable event. It was not, never has been and likely never will be. It is no good brushing it under the carpet.

‘In an ideal world, it would be crime-free and held in the streets. But that is hard to see.’

But a spokesperson for the London Mayor said today that ‘it is only right’ that the carnival remains in Notting Hill.

A statement said: ‘The Mayor’s thoughts are with the family and friends of those impacted by the violence at the weekend and he is absolutely appalled by the reports of female officers being sexually assaulted whilst on duty. 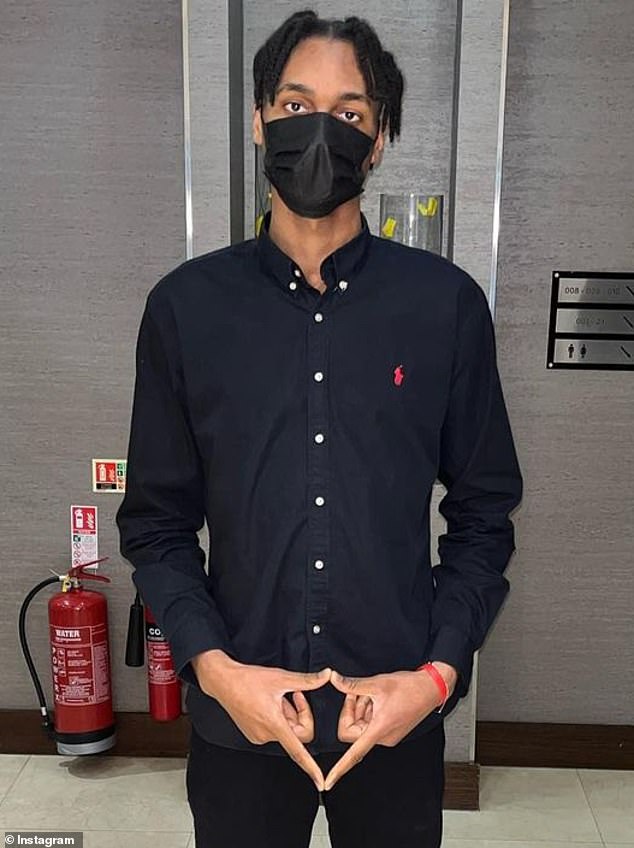 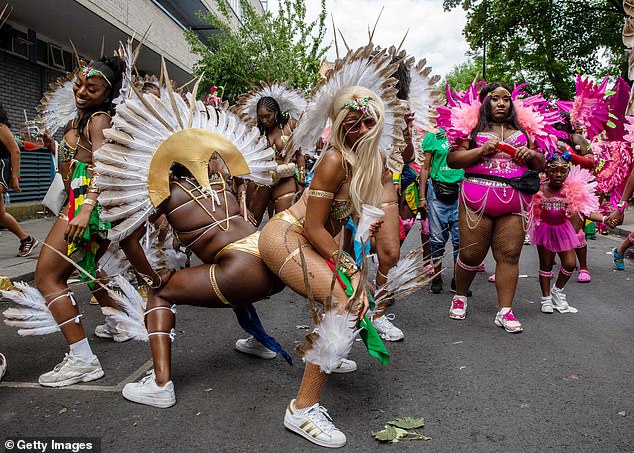 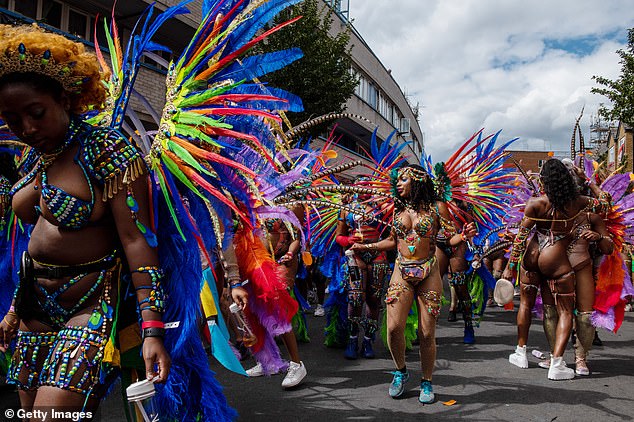 Footballer-turned drill rapper Takayo Nembhard has been named as the victim stabbed to death at Notting Hill carnival after travelling from Bristol to ‘simply to have a good time’ – as police hunt his killer.

Mr Nembhard, 21, was fatally stabbed on Ladbroke Grove under the Westway flyover at 8pm on Monday as thousands lined the streets for the west London carnival.

Police officers gave him first aid until the arrival of paramedics, before he was taken to an ambulance ‘through significant crowds in challenging circumstances’.

Mr Nembhard, who went by the stage name TKorStretch and has just under one million views across his music videos on YouTube, was taken to a nearby hospital where he was pronounced dead last night. 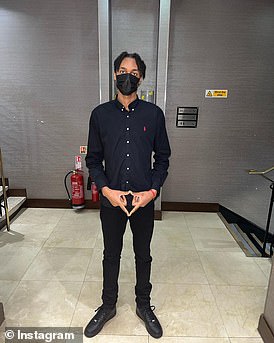 He was a former youth team player at Bristol Rovers, before turning to drill rapping when he had to retire from football due to an injury. His girlfriend is also currently pregnant, with a poignant tribute saying the ‘child will never meet his father’.

His death was confirmed in an Instagram post today, which said: ‘Two years ago a young 19-year-old man came from Bristol to meet me at my studio with his dad, his name was Takayo Nembhard AKA TKorStretch.

‘That meeting took us on a journey. We recorded some great music together. His talent was endless and I can tell you guys he was close to greatness!

‘So it’s with a heavy heart that I bring the news that Takayo (TKorStretch) passed away last night. He came from Bristol to simply have a good time at the London carnival and this is the end result!

‘My deepest condolences to TK’s mother & father his brother, two sisters, girlfriend and child that will never meet his father! TK was a good kid, a good guy and what has happened breaks my heart. Rest in peace my friend.’

Mr Nembhard’s manager Chris Patrick said in a statement: ‘He went to Carnival with his younger sister and friends to have a good time. This is the worst possible ending for a talented kid.’

Part of TKorStretch’s persona while performing was wearing masks.

In an interview with Wordplay Magazine last July, he explained why: ‘I don’t want my face to be the face everyone knows. I don’t want to go to Tesco and have people know that it’s me who makes the music.

‘I don’t care about fame, I just want to make music and have people enjoy it. I don’t mind talking to people, don’t get me wrong, but if I’m with my mum or sisters or something I just want to be able to chill out.’

He told how he began making music as a teenager after suffering a leg injury while playing for Bristol Rovers’ under-17 team.

‘Because of that I wanted to find something to keep me focused so I didn’t go insane. I liked singing so I was going to little studios here and there and then started taking it more seriously.’

‘He is clear the perpetrators must be brought to justice swiftly. There is absolutely no place for crime at Notting Hill Carnival and we will continue to work closely with the organisers and the police to prevent it.

‘The Notting Hill Carnival is one of the world’s biggest street festivals and has become a firm London tradition over many decades.

‘It was born out of the African-Caribbean immigrant community in North Kensington and Notting Hill in the 1960s, and it’s only right that this remains its home.’

Mr Ramm’s remarks come after Mr Marsh this week said he was ‘fed up’ of no one talking about the groups of people who ‘go for one reason – to cause harm to others’.

‘We seized dozens of knives over the course of the two days and stopped about 200 to 300 fights – small, sporadic fights. This is not a fun-loving weekend.

‘The tragedy to this is 98 per cent of people who go there are law-abiding and want to enjoy themselves, but there is an element, and I am going to put it out there because I am absolutely fed up with no one talking about it, of people who go for one reason – that is to cause harm to others.’

The Met is investigating two incidents of officers allegedly having been sexually assaulted during the carnival.

In the first incident, an officer was ‘grabbed around the neck and kissed on the face without her consent’.

A 46-year-old man was arrested at the scene and was later charged with sexual assault, the force confirmed today. Florin Matei will appear at Westminster Magistrates’ Court on September 19.

A probe has also been launched after a second female officer was ‘surrounded by a group of men who danced and “grinded” against her’.

Other officers ‘came to her assistance’, but police say it ‘was not possible’ to detain the group at the time and they were able to escape into the vast crowds that lined the streets for the carnival.

Pictures have also emerged of carnage on the Tube as revellers were shoved onto trains as they tried to leave the carnival.

Yesterday, Tory MP Victoria Atkins said action needs to be taken to remove the ‘dark underside’ of the carnival.

She told LBC: ‘I think the carnival is a wonderful celebration. I have enjoyed it myself in years gone by and it is a enormous shame for the overwhelming majority of people who go to carnival to dance, to sing, to eat delicious food and have a great time with their friends and family.

‘But there does seem to be this dark underside of the carnival where people go along and they are violent, they hurt other people.

‘There has sadly been a murder, so I do think we have got to try to do something to get rid of this dark underside of the carnival so that the happy celebration that we all enjoy watching can continue in Notting Hill.

‘I wouldn’t want to stop carnival. I don’t think we could if anyone tried to, frankly. Carnival will happen whatever.’

The last event, which was held in 2019 before the Covid pandemic struck, saw 463 crime allegations, according to Met Police records. The majority of offences were drug related.

And footage from Monday emerged of a thug brutally punching a woman to the ground as a brawl broke out on the chaotic final day of the carnival.

Another video showed crowds screaming and having to climb over a gate as thousands of people ended up packed in a single road with no space, while footage has also been shared of a topless brawl between two women at the event on Sunday.

Footage has also been shared online of a brawl between two women on Sunday.

The clip shows two women, one wearing a black tank top with her breasts exposed, being held back by a man and a woman.

The topless woman runs towards a woman in a black and white check cardigan, repeatedly punching her in the head in front of a horrified crowd.