Northern Territory police officer Zachary Rolfe has been committed to stand trial in the Supreme Court over the fatal shooting of Aboriginal teenager Kumanjayi Walker.

Constable Rolfe was charged with murder after the 19-year-old Warlpiri man was shot dead in an attempted arrest in the remote community of Yuendumu, around 300 kilometres west of Alice Springs, last November. 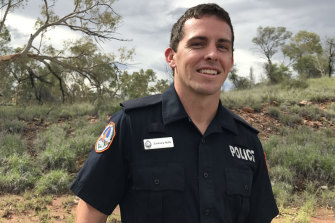 Zachary Rolfe has been charged with one count of murder over the death of Kumanjayi Walker.Credit:Grenville Turner

Judge John Birch handed down his decision in the Alice Springs Local Court on Monday after a three-day committal hearing last month.

It is the first time a police officer will face a murder trial over an Aboriginal death in custody in the Northern Territory.

Mr Walker's family and members of the Yuendumu community, gathered on the lawns outside the court, cheered upon hearing the decision.