A series of unrelated carjackings in New York City’s Midtown Manhattan took place within the span of one hour on Wednesday as the city faces a rise in car thefts less than two weeks into the new year, authorities said.

The first carjacking happened on West 55th Street and Broadway at about 4:30 p.m. when a man threatened a driver with a Taser and stole a black Audi SUV, FOX5 New York reported, citing police.

Part of the carjacking was caught on video and posted on the Instagram account WhatIsNewYork. The video shows the stolen car smash into a sedan head-on as someone who appears to be a police officer tries to stop the vehicle. The stolen SUV speeds away, leaving a trail of wreckage in its wake. 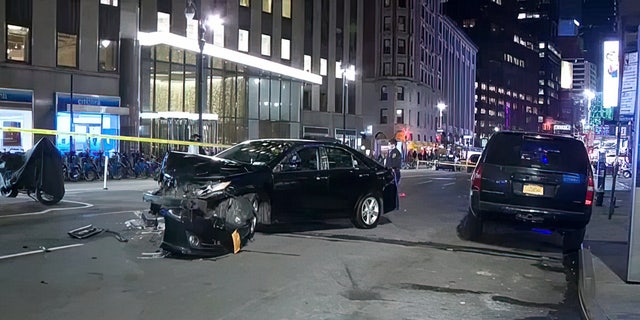 A carjacking happened on West 55th Street and Broadway at about 4:30 p.m. in Midtown Manhattan on Wednesday.
(FOX5 WNYW)

Police said the stolen SUV eventually crashed into a pole near Columbus Circle and the suspect fled on foot into the subway.

The officer who tried to stop the car was treated for a hip injury at a hospital and is expected to recover, the station reported. 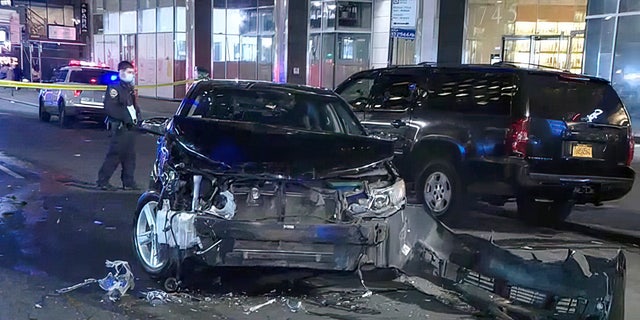 The suspect crashed the stolen car near Columbus Circle and fled into the subway, police said.
(FOX5 WNYW)

Less than an hour later, police said a separate carjacking took place on West 36th Street near Seventh Avenue, police said. No injuries were immediately reported in this case.

No arrests have been made in either incident as of early Thursday. 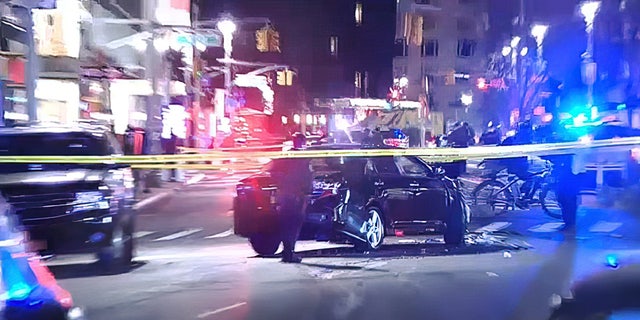 Police at the scene where the suspect in the first carjacking crashed near Columbus Circle in Manhattan.
(FOX5 WNYW)

Police arrested a suspect in a third unrelated carjacking at the intersection of East 42nd Street and First Avenue after a license plate reader alerted them that the car was stolen, WABC-TV reported. Police said a second suspect in this incident remains on the loose.

The vehicle was stolen in Brooklyn, according to the report, but it was unclear when the theft occurred.

The series of carjackings come as the city faces a rise in car thefts less than two weeks into the new year.

As of Sunday, the number of citywide grand larceny auto cases year-to-date rose to 329 – a 72.3% increase compared to 191 reported during the same period last year, according to police statistics.