One in ten Ukip councillors elected since 2015 have defected to the Tories, new analysis has today revealed.

It comes amid fears the party is being targeted by hardline Brexiteers who are flooding into local associations in order to steer policy on the looming departure.

Several Tory MPs have spoken out against the ‘entryism’ and warned party bosses to prevent a ‘blue Momentum takeover’ – a reference to the campaign group Momentum’s takeover of Labour under Jeremy Corbyn.

Analysis by the Red Roar website found that at least 36 of the 358 Ukip councillors elected since 2015 have left the party to join the Conservatives.

This included the decision by seven Ukip councillors in Great Yarmouth in Norfolk to switch to the Conservatives last year.

In councils across the country, individual councillors from the party have quietly defected to the Tories.

Arron Banks, the millionaire insurance tycoon who was once Ukip’s  biggest donor, yesterday urged backers of his pro Brexit group Leave.EU to join the Tories. 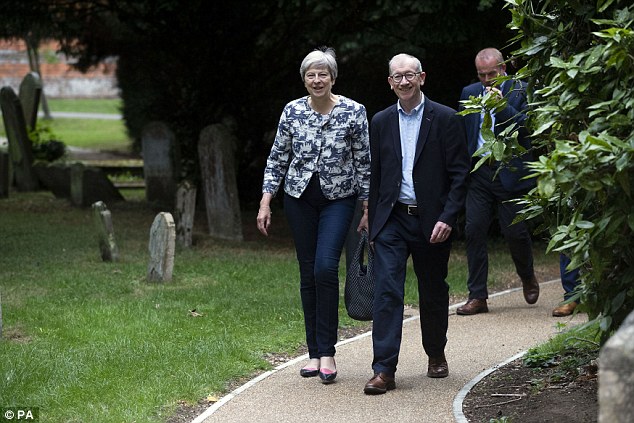 Analysis found that at least 36 of the 358 Ukip councillors elected since 2015 have left the party to join the Conservatives, which are led by Theresa May (pictured yesterday heading to church with her husband Philip in Maidenhead) 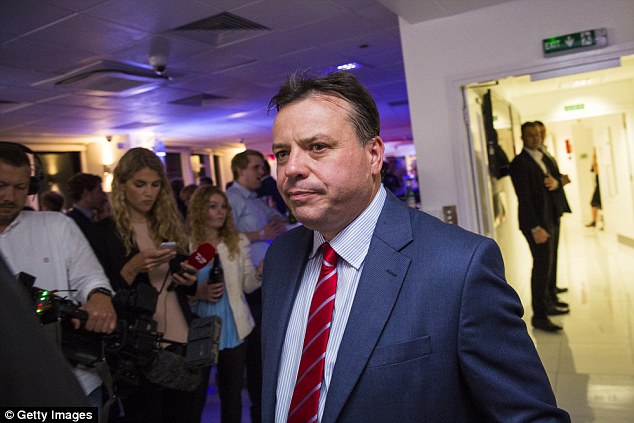 Arron Banks (pictured on the Brexit referendum night in June 2016 at Leave.EU’s party headquarters in Millbank), the millionaire insurance tycoon who was once Ukip’s biggest donor, has urged backers of his pro Brexit group Leave.EU to join the Tories in order to oust Theresa May and install a Brexiteer as leader

Mr Banks, who last week revealed he had tried to sign up to the Tories but was turned away by party bosses after they realised who he was.

Writing in The Sunday Times, he urged his supporters to sign up to the Conservatives to unseat Theresa May and push through a tougher Brexit policy.

He wrote: ‘The best way to secure Brexit and our country’s future is via the Conservative Party. It is in Government and, for now, calls the shots.

‘To that end I am urging the 90,000 members of my Brexit campaign Leave.EU, and the 1.4m who follow us on social media, to join the Conservatives and have a say.

‘Soon we will launch a grassroots campaign by writing to all Tory councillors and local party chairmen and starting a recruitment drive to reinvigorate the party.

‘We will support Brexit MPs and recruit new members, hopefully in areas where the party has extreme “remain” MPs.’

He said that more than 3,000 people clicked through to the “Join the Tory party” link on the Leave.EU website.

He added: ‘Most Brexiteers agree that Theresa May’s Chequers plan is a total betrayal of Conservative values.

‘Since the Chequers plan was hatched, we have received floods of small donations and thousands have joined our call to get involved.

‘Let’s help unseat Mrs May, and help install a true Brexiteer such as Boris Johnson or Jacob Rees-Mogg to the top job.’ 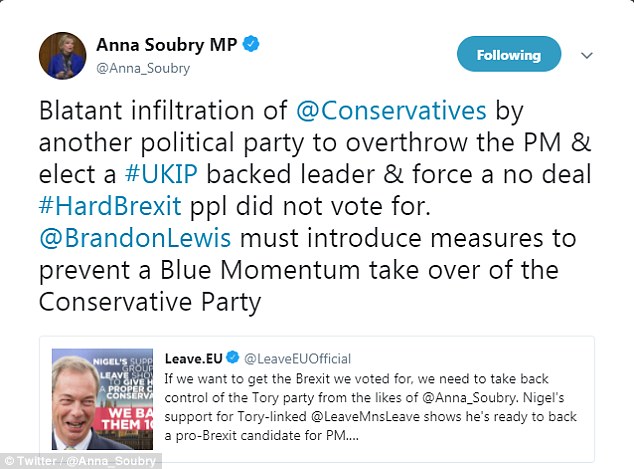 Tory Remain-backing MPs have hit out at the entryism and warned of the growing prospect of a ‘poisonous extremism’ in power.

Sarah Wollaston wrote on Twitter: ‘The entryism is real and no one should be in any doubt that we face the serious and growing prospect of poisonous extremism in power.’

Fellow Conservative Anna Soubry wrote: ‘Blatant infiltration of the Conservatives by another political party to overthrow the PM & elect a Ukip backed leader & force a no deal hard Brexit ppl did not vote for.’

She said that the Tory Party chairman Brandon Lewis must’ introduce measures to prevent a Blue Momentum take over of the Conservative Party’.