Chileans vow to continue in the streets until the gov’t meets demands for systemic change, improved social conditions. 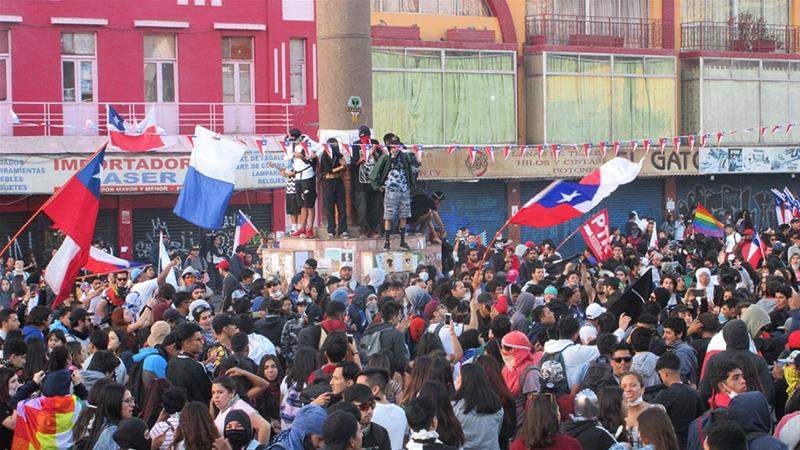 Antofagasta, Chile – Thousands of Chileans rallied in major cities across the country on Monday, marking a month since protests over inequality and injustice erupted in the country.

Despite a series of concessions, protesters have promised to stay in the streets until the government meets specific demands for systemic change and improved social conditions.

The protests initially started in mid-October when secondary students in the capital Santiago protested against a metro fare increase. Since then, however, the demonstrations have mushroomed, with protesters taking to the streets against the country’s political-economic model and the police crackdown on the demonstrations. The key demands of protesters include ensuring there’s a constitutional assembly, higher pensions, wages, affordable healthcare and education.

“Chile was posited as the oasis of Latin America but the reality is it never was,” Akemi Matsubara, a 21-year-old law student, told Al Jazeera.

Marches and rallies continue on a daily basis and some have rivalled mobilisations in the late 1980s against General Augusto Pinochet’s dictatorship. Thousands of people were killed and forcibly disappeared for political reasons during Pinochet’s 1973-1990 rule.

“We experience the legacy of the dictatorship but we did not live through the transition,” said Matsubara.

“We have never seen anything like this,” she said while participating in a university building occupation in Antofagasta, a city 1,400km (870 miles) north of the capital.

In a statement on Sunday night, President Sebastian Pinera said the government had listened to the legitimate and just demands of millions of Chileans. Citizens would have the last word on a new constitution and the government was willing to consider raising pensions by more than 20 percent, he said.

“We are aware that the measures we have announced and will announce will not solve all the problems immediately,” he said. “The outcome of these past four weeks is not yet written.” 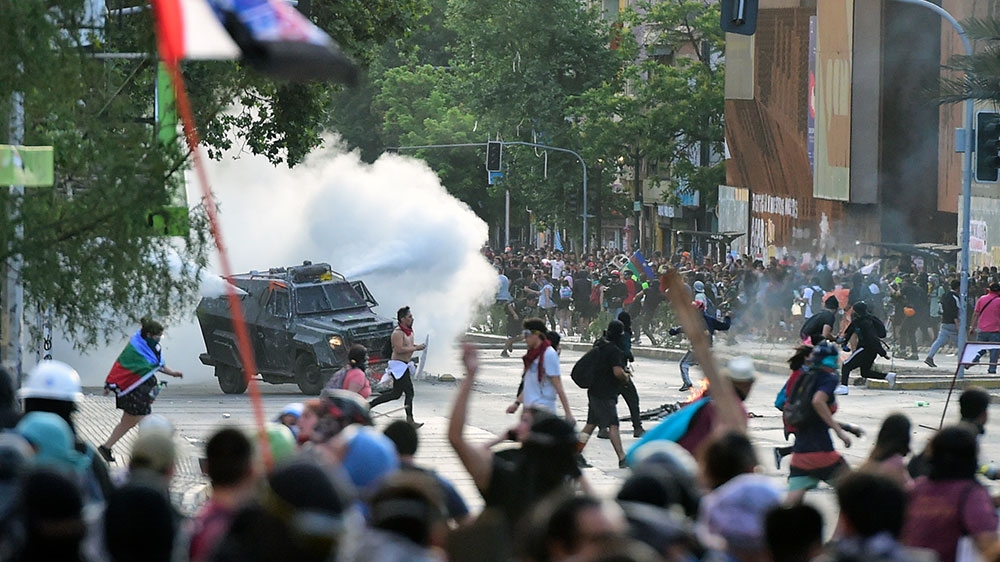 Pinera strongly condemned violence and destruction and said there would be no impunity for perpetrators. He thanked military and police forces but also acknowledged there were abuses and instances when human rights were not respected.

“In some cases, protocols were not respected. There was excessive use of force. Abuses of crimes were committed,” he said, adding that the government was committed investigations and justice.

An Inter-American Commission on Human Rights team arrived on Monday for a four-day visit. A team from the Office of the United Nations High Commissioner for Human Rights will conclude its 24-day visit on Friday.

At least 24 people have died as a result of the unrest, including five killed by police and military forces during a state of emergency in October. Over the past month, more than 6,000 people have been detained.

The National Human Rights Institute has filed 58 legal actions against authorities, mostly police, for alleged sexual violence, and 246 for torture and other cruel treatment. The institute has also documented 217 cases of hospitalisation for eye injuries, roughly 75 percent of which were caused by projectiles. 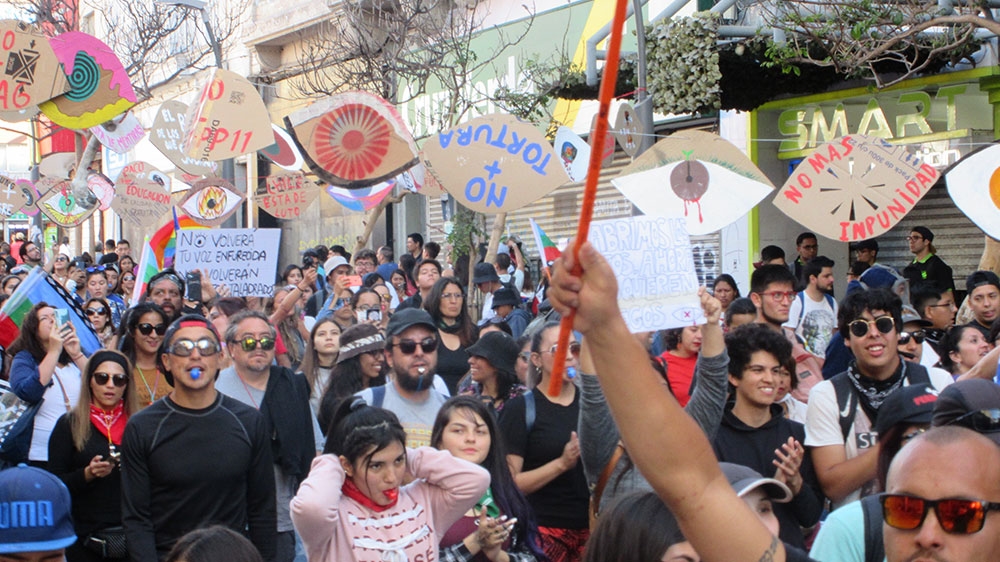 People passed by up and down a busy pedestrian street in downtown Antofagasta on Monday morning as Silvana and other youth laid out cardboard eyes with artwork and messages on the ground. An hour later, the protest art installation the group called, “the eyes of Chile” was strung with wire, zigzagging overhead between lampposts.

“The government is mutilating people’s eyes so that we will stay silent, to generate fear. But this is a generation that is no longer afraid of anything,” said Silvana.

Last week, the government ceded in part to one of the unifying demands of many social movements and protesters: a new constitution. Polls in recent weeks have consistently shown 80 percent of Chileans support replacing the current dictatorship-era constitution.

A plebiscite will be held in April 2020 to ask Chileans whether they want a new constitution, and, if so, whether they want a mixed citizen-legislator or all-citizen convention, ruling and opposition politicians announced on Friday. Should the process move forward, the text would require a two-thirds majority and ratification in a national referendum.

The agreement has sparked debate throughout the country. Many social movements have rejected the deal, while others recognise it as an advance with serious challenges and gaps concerning process and representation. But a new constitution was only one reason protesters have been in the streets, and more immediate grievances persist. 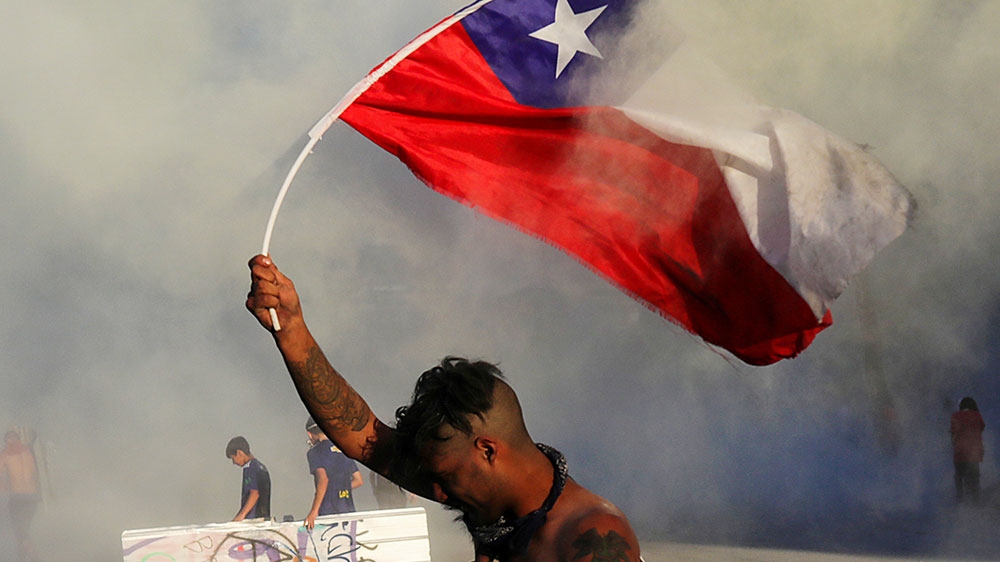 “The plebiscite is a step forward, but that is just one part of the problem,” said Silvana.

“People now want justice for all of the harm and the human rights violations that have been committed by the military, the police, and the government itself. None of the representatives there represents us,” she said.