Plane sailing! Amazing optical illusion shows a cruise ship appearing to HOVER over the horizon – but there’s a very logical explanation for the bizarre sight

An incredible optical illusion has shown a huge cruise ship appearing to hover over the horizon.

The footage filmed from a beach at Mount Maunganui in New Zealand showed the vessel seemingly suspended above the ocean last week.

The bizarre sighting – filmed by beachgoer Monika Shaffner – was caused by an unusual natural phenomenon.

‘I filmed this optical phenomenon that made a ship look like it was floating in the air,’ she wrote on Facebook.

What she saw was caused by a process where changes in the atmosphere alter how an object in the distance is visible to the human eye.

The mirages appear when a layer of warm air sits on top of a layer of cold air, causing the light from the ship to bend as it passes through gaps in the air.

The optical illusion can also be seen where the sun sets over the ocean – when the spherical sun seems to elongate or distort as it ‘meets’ the horizon.

Not only can the phenomenon distort objects images so they appear larger or smaller, in different places and upside down but it can also obscure them completely.

Land, ships and other features can be hidden behind this wall. 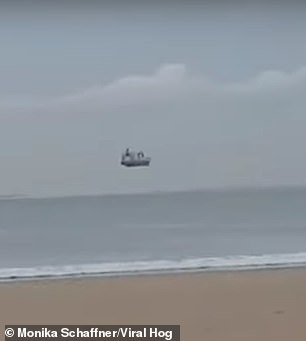 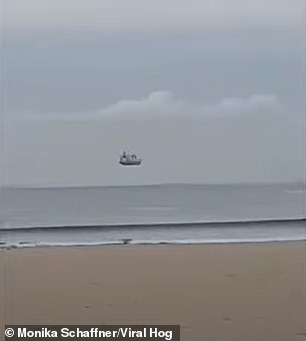 Such illusions have become collectively known as ‘Fata Morgana’.

‘Fata’ is Latin for ‘fairy’ and Morgana is the sorceress from the legend of King Arthur – referencing the idea that the mirages were images created by witchcraft to lure sailors to their death.

In 2012, British historian and author Tim Maltin proposed the theory that the iceberg that sunk the Titanic may have been obscured by a Fata Morgana until it was too late to steer clear of danger.

He said he believed a distortion on the night of April 14 may have caused the water behind the iceberg to be ‘bent’ over the object and create a false horizon, hiding the berg from the ship’s lookouts.

What is a Fata Morgana?

A Fata Morgana is a type of mirage that distort distance objects, and can be can be seen on land or sea.

It’s caused when the sun heats up the atmosphere above the land or oceans, which creates a gradient of temperatures.

The air close to the surface is relatively cool and above that are layers of warmer air.

When light hits a boundary between two layers of the atmosphere that are different temperatures – and as a result different densities – it bends and travels at a different angle.

Our brain assumes that light travels in a straight paths, so when it bends, we think the object is where it would be if the light’s path runs straight.