Otterly delicious! Greedy otter bites off more than it can chew after catching a huge octopus off the Scottish coast

This is the moment an otter became locked in a battle with an octopus after emerging from the water with the creature wrapped around its head.

The European otter had quite the fight on its hands as the sea creature began using its eight tentacles to cover the mammal’s eyes and face in the waters off Oban, Scotland.

Michelle Coyle, from Chorley in Lancashire, photographed the funny scene during a trip to the beauty spot with her husband.

The 58-year-old said: ‘We were watching him fishing for a while, just catching small fish and then after diving he suddenly popped up with the enormous octopus. 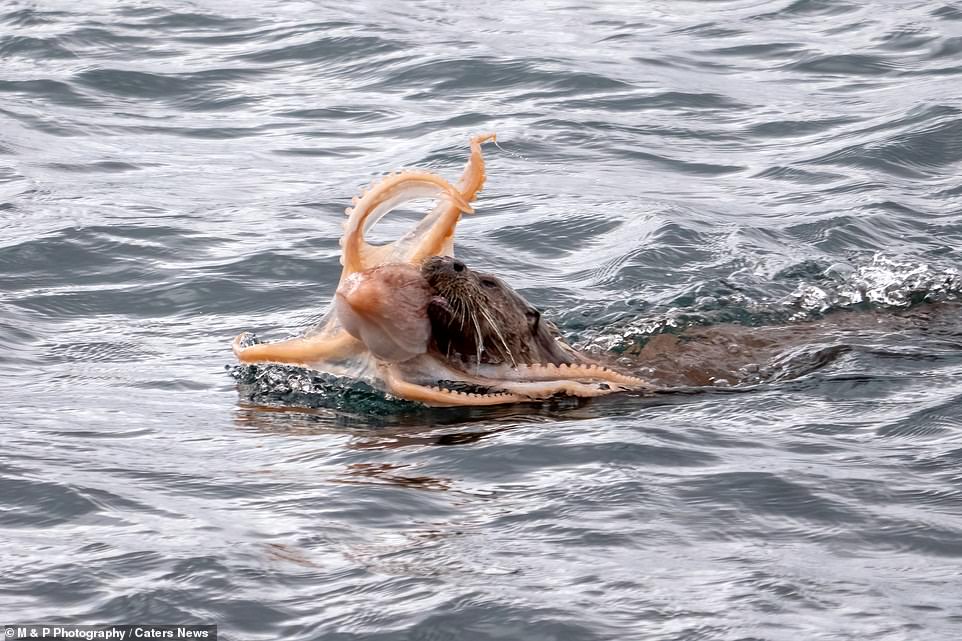 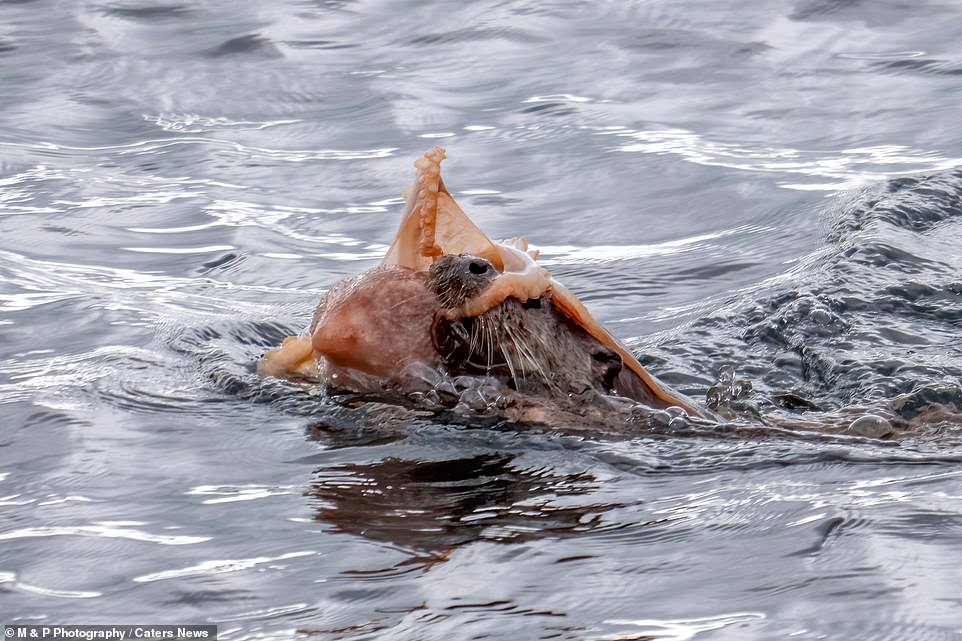 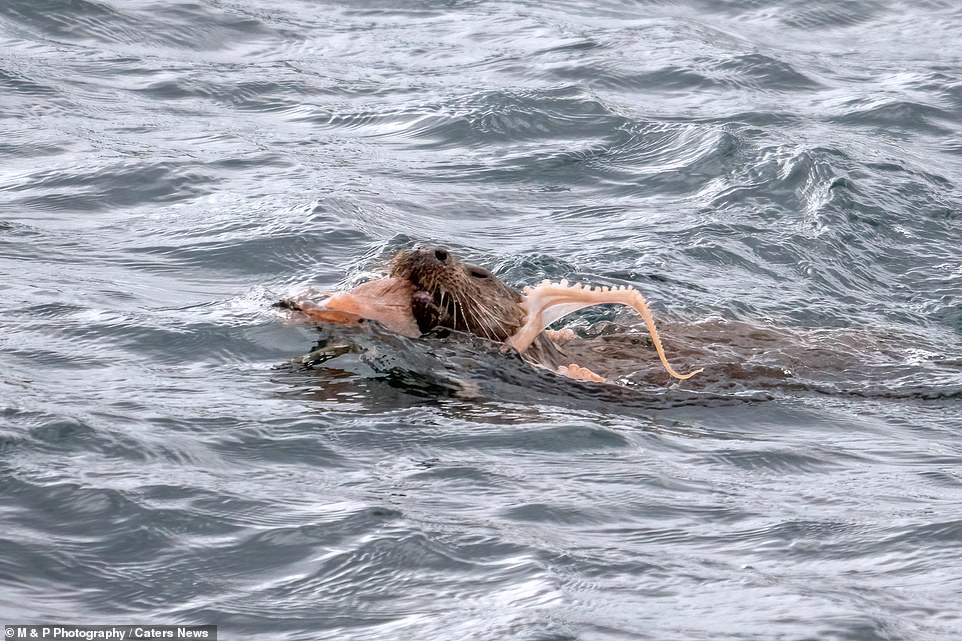 ‘It very quickly started wrapping its tentacles around his face, it looked to be quite a struggle for him to bring it to shore.

‘When he eventually made it he took it under a rock and stayed there for a while to eat it, presumably hiding it from the gulls.

‘We have seen otters fishing before, but never seen a catch like this.

‘It was amazing to see.’

The otter was lost from most of England and Wales between the 1950s and the 1970s due to the pesticide pollution of waterways. 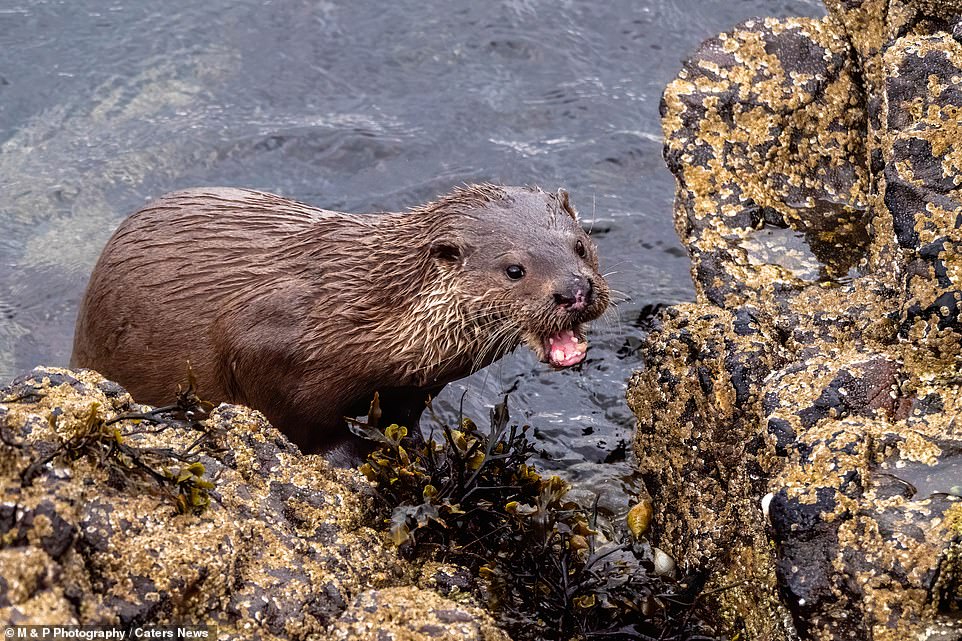 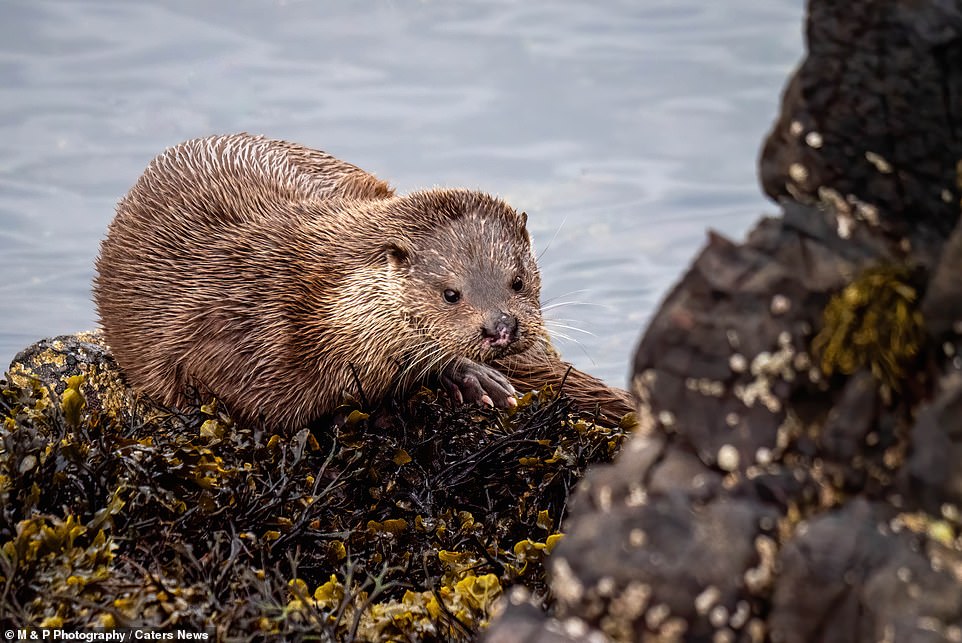 The otter took its catch of the day under a rock to eat it in peace and ‘presumably to be away from the seagulls’, said the tourist who photographed the moment

But the mammal survived in Scotland’s cleanest bodies of water in the north and west, including Oban.

Today, the species is flourishing across Scotland, where there are believed to be around 8,000 otters.

Coastal otters are often referred to as ‘sea otters’, but they are exactly the same species as the animals that live further inland.

Otters must keep their fur free of salt using freshwater for it to remain effective as insulation.

Why is Scotland home to so many otters? 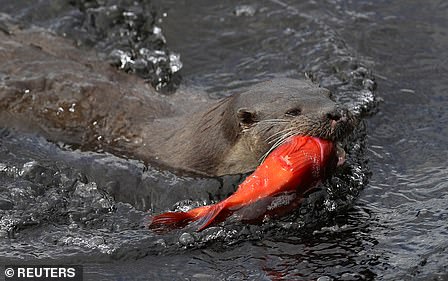 Scotland is home to around 8,000 otters, estimates suggest

The otter (Lutra lutra) was lost from most of England and Wales between the 1950s and the 1970s because of pesticide pollution of waterways.

But it survived in Scotland’s cleanest bodies of water in the north and west.

Today, the species is flourishing across Scotland, and recovering well across the UK as waterways are cleaned up. The Scottish population is estimated to be around 8000 otters.

Otters are largely solitary, semi-aquatic mammals that get most of their food from lochs, rivers or the sea. The Scottish population has an unusually high proportion (perhaps 50% or more) of coastal-dwelling individuals, which feed almost exclusively in the sea. An otter must eat around 1–1.5kg of prey daily.

Coastal otters are sometimes called ‘sea otters’, but they are exactly the same species as the animals that live further inland. Mainly active during the day, coastal otters generally have much smaller home ranges than their riverine counterparts, because of the abundance of fish and crustacean prey in inshore waters.

Otters must keep their fur free of salt using freshwater for it to remain effective as insulation.

In freshwater, otters feed on mainly fish such as trout, salmon and eels, but also on spawning frogs and toads in spring and occasionally on mammals and birds.

Otters that live in freshwater habitats are largely nocturnal and occupy very large home ranges (around 32km for males and 20km for females).

‘Holts’ are used for shelter and breeding and may take the form of a burrow, natural hole, cave or other structure (including man-made ones).

Otters may also rest or seek temporary shelter in above-ground structures known as ‘couches’. Britain’s otters may breed during any month of the year.

The otter belongs to the same family as the badger, pine marten, stoat and weasel, and American mink.