A female motorcyclist has been praised online after a video emerged showing her throwing a bag of rubbish back to a driver who had thrown it out of her car window.

Apparently offended by the driver’s behaviour, the biker in black picked up the litter, tossed it back before zooming off, leaving the angry driver protesting on the road.

The incident is said to have taken place in Beijing, and it happened when the motorcyclist and the car driver were waiting at traffic lights. 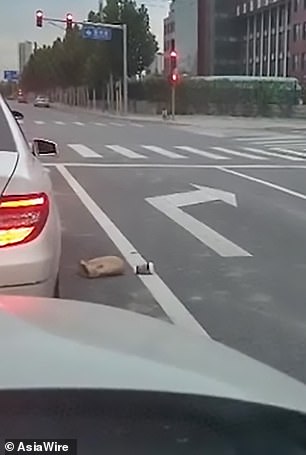 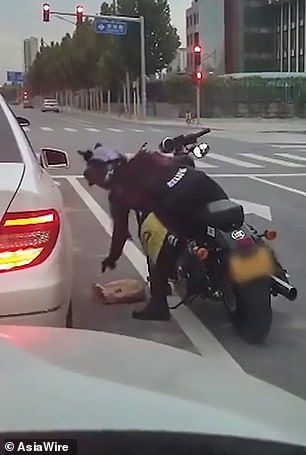 The footage, which has become trending, shows the driver chucking a paper bag onto the road at a junction. A paper cup was already on the ground before the video started.

The clip was taken by an eyewitness in a car behind the two parties, and he was heard condemning the driver to have ‘low morality’.

The video then captures the biker stopping at the lane next to the car. Apparently offended by the driver’s behaviour, the biker looked at the rubbish and bent down to pick it up.

She then threw it back into the car through the open window. 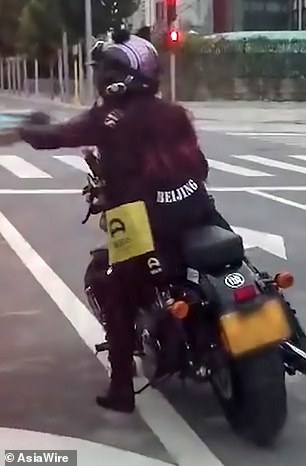 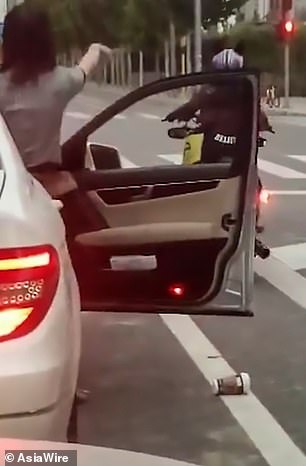 The biker in black tosses the litter back to the driver, leaving the driver protesting behind her

The female driver then gestured to the biker, who suddenly pulls away to turn right at the intersection.

The driver then got out of her car and appeared to shout at the motorcyclist.

Web users have largely applauded the biker for teaching the ‘inconsiderate’ driver a lesson.

One commentator praised ‘well done’ while another gushed ‘she is so cool’.

A third user said the biker’s act was ‘extremely satisfying’.