More than 2MILLION people in England ‘have had long Covid’ with symptoms including fatigue, chest pain and muscle aches lingering three months after the infection

More than two million people in England have suffered from ‘long Covid’ three months after beating the virus, a major study suggests.

An Imperial College London survey of 500,000 participants found a third of patients reported at least one lingering Covid symptom 12 weeks after the initial illness.

Broadening their results to the wider population, the researchers estimated that two million people – or one in 30 – will have suffered from long Covid months after clearing the disease.

They said an even greater amount struggle with debilitating symptoms for several weeks after their coronavirus infection.

Long Covid is an umbrella term encompassing symptoms that persist for more than a month.

Imperial found the risk of developing the poorly understood condition increased as people got older – in line with how the risk of Covid itself rises with age.

Those who suffered a bad bout of Covid and received hospital care were also more likely to suffer long-lasting symptoms.

The second vertical dotted line shows that after 12 weeks, tiredness, shortness of breath and muscle aches were the three most persisting symptoms 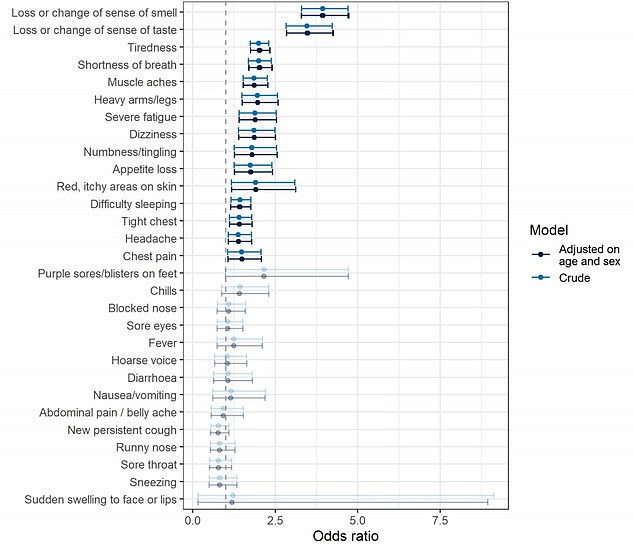 The scientists asked participants which of the 29 symptoms listed they experienced. The most reported symptoms were a loss or change to taste or smell, tiredness, shortness of breath and muscle aches

Imperial said other risk factors included being a smoker or vaper, being overweight and living in deprived areas.

There is currently no medical definition for long Covid, as scientists don’t yet know enough about the condition.

But people with certain symptoms that have been linked to coronavirus that do not get better within a few weeks are defined as having long Covid.

Lead researcher Professor Helen Ward, a public health expert at Imperial, said: ‘Long Covid, or post Covid syndrome, is poorly understood. It is a new condition and we are learning all the time.’

She said women may be more affected by persisting Covid symptoms because they have a pattern of immune response that is ‘quite different to that in men’, but scientists are in ‘the early days’ of exploring this.

The NHS has opened over 80 long Covid assessment services across England to tackle the growing number of patients with the condition. It announced plans last week to give £30 million to help GPs improve diagnosis and care.

Between September 2020 and February 2021, Imperial scientists asked 508,707 people aged over 18 if they had been infected with Covid and what their symptoms during and after their inection.

Nearly one in five of the respondents – 19.2 per cent – said they had Covid, while one third of people who reported having symptoms said they lasted for at least 12 weeks.

Around a tenth of those with symptoms said the symptoms impacted their daily life.

Overall, the most reported symptoms during Covid infection were a loss or change to taste or smell, tiredness, shortness of breath and muscle aches.

But after 12 weeks, tiredness, shortness of breath and muscle aches were the three most persisting symptoms. 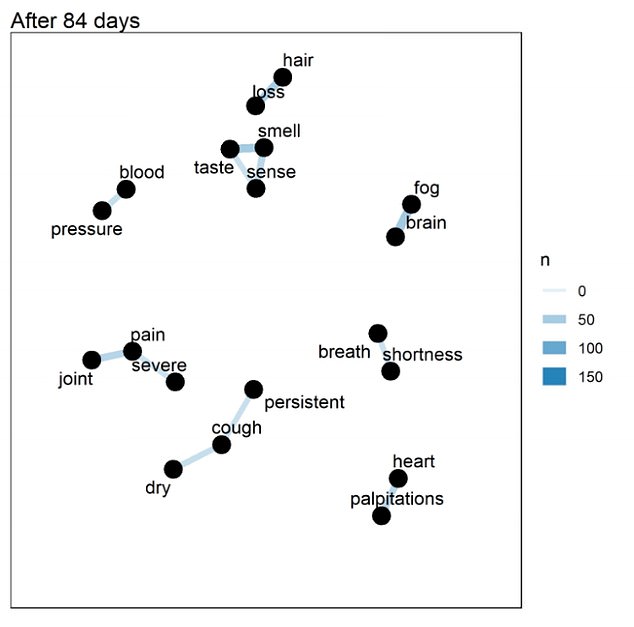 In addition to the list of 29 symptoms provided by the researchers, they asked an open question about which other symptoms people experienced. Some participants said they also experienced brain fog, heart palpitations and hair loss after 12 weeks

WHAT ARE THE LONG-TERM SYMPTOMS OF COVID-19?

Most coronavirus patients will recover within a fortnight, suffering a fever, cough and losing their sense of smell or taste for several days.

However, evidence is beginning to show that the tell-tale symptoms of the virus can persist for weeks on end in ‘long haulers’ — the term for patients plagued by lasting complications.

Data from the Covid Symptom Study app, by King’s College London and health company Zoe, suggests one in ten people may still have symptoms after three weeks, and some may suffer for months.

For those with more severe disease, Italian researchers who tracked 143 people who had been hospitalised with the disease found almost 90 per cent still had symptoms including fatigue two months after first falling unwell.

The most common complaints were fatigue, a shortness of breath and joint pain – all of which were reported during their battle with the illness.

The researchers said people with long Covid fell into two broad groups. In the first, the most common symptom was tiredness and muscle aches.

In the second, the most common symptoms were shortness of breath, tightness in chest, and chest pain. But other commonly reported symptoms included brain fog and heart palpitations.

Professor Paul Elliott, director of the REACT programme at Imperial, said the team were concerned long Covid could become ‘a major challenge as we go into the next stage of the pandemic’.

He said the study is ‘reassuring’ is that most people get better within four weeks and ‘a whole lot more get better by 12 weeks’.

‘But there is a rump of people who continue to have symptoms after 12 weeks and that’s what we’re talking bout,’ he said.

Professor Elliott said it is ‘extremely unlikely’ that long Covid is one condition and researchers now need to focus on how to manage and treat these ongoing symptoms.

He said ‘a great strength’ of the study is that it is ‘clearly one of the largest’ and is community based, which means the scientists can refer the results back to the population as a whole, which is what they did when referring to the 5.8 per cent.

Professor Elliot noted that some studies have found that just five per cent of people have long Covid, while others estimate it to be around 50 per cent.

‘We are in phase of really building up our knowledge and we need different types of studies to understand this new and emerging phenomenon,’ he said.

A separate study published today in Nature Medicine found that 30 to 50 per cent of adults with Covid-19 develop long Covid.

The Imperial researchers noted that because many of the symptoms they asked about are common and the study is based on self-reported data, their findings may overestimate the number of people with long Covid.

But they have just started a follow-up study that will do more testing on both those with and without Covid to gather more precise data.

Health and Social Care Secretary, Matt Hancock said: ‘Long Covid can have a lasting and debilitating impact on the lives of those affected.

‘Studies like this help us to rapidly build our understanding of the impact of the condition and we are using these findings and other new research to develop support and treatments.

‘We are learning more about long Covid all the time and have made £50 million of research funding available to support innovative projects, with clinics established across the country to help improve the treatment available.’