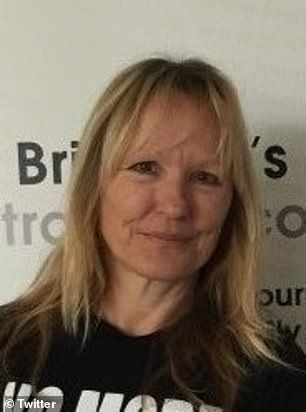 Transgender Trend director Stephanie Davis-Arai, pictured, created a list of stickers featuring slogans such as ‘no child is born in the wrong body’

A parents’ group which produced a set of stickers promoting anti-transgender attitudes in school has apologised after admitting they could lead to bullying.

The downloadable sticker sheet created by Transgender Trend – a group of UK-based parents which sends resource packs to teachers questioning the ‘trans narrative’ – features slogans such as ‘No child is born in the wrong body’.

Others proclaimed ‘Medical sex-change treatment for children is an experiment’ and ‘Children confused about their sex usually grow out of it’.

Another asserted that teenagers come out as transgender because of ‘social media binges’.

Transgender Trend director Stephanie Davies-Arai recommend that pupils put the stickers ‘all over your pencil case!’.

But after online outcry against the insensitive slogans, Davies-Arai announced on Twitter that the stickers would be withdrawn from the group’s website, saying: ‘Although we obviously never intended our stickers to be used in schools, we understand people’s concerns that they could be used to create conflict between students.

‘This is the last thing we want, so we have withdrawn the stickers from our site.

‘We are sorry, we made a mistake.’

Twitter users were less than impressed with the apology.

One poster said: ‘They said they never wanted the stickers to be posted in schools, but their tweets were explicitly encouraging kids to place them in schools.

‘Transgender Trend is a hate group.’ 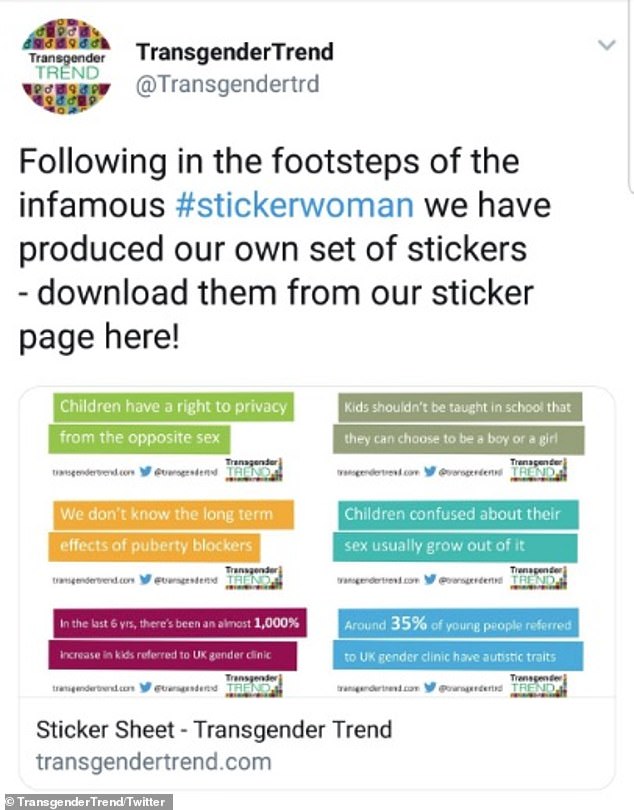 Christine Hart commented: ‘Transgender Trend say of course they never wanted these brightly coloured stickers with simple child-friendly messages to end up in schools as they are forced to withdraw them and issue a grovelling apology.’

Transfigurations added: ‘Transgender Trend issue a statement and apology over their stickers furore after they came under sustained criticism – I just hope that people saw through the hate and didn’t bother to download them – otherwise children’s lives could be damaged.’

In response to the sticker furore, a petition has been launched calling for anti-LGBTQ+ material to be banned from schools.

Its creator Sarah Woodall wrote: ‘There has been a recent influx of anti-LGBT+ material being sent to schools in England.

‘We are asking that any and all material, that is first and foremost designed to give a negative view of the LGBT+ community, be removed from schools.’

The petition has currently attracted more than 5,600 signatures and will elicit an official government response if it reaches 10,000 before the February 10 deadline.

Transgender Trend describes itself as a group of parents ‘concerned about the social and medical ‘transition’ of children, the introduction of ‘gender identity’ teaching into schools and new policies and legislation based on subjective ideas of ‘gender’ rather than the biological reality of sex’.