‘She should live, rot and die in a concrete cage, forgotten by the world’: Killer nanny who stabbed two children to death shows NO emotion as she is jailed for life without parole, minutes after parents’ moving plea

The New York nanny who brutally murdered two young children in her care in 2012 has been sentenced to life in jail without the possibility of parole after the victim’s parents made an emotional plea to the judge.

Yoselyn Ortega, 56, showed little emotion as she was sentenced to two consecutive life sentences for the murders of Lucia, six, and Leo, two, five years ago.

The children’s parents, Kevin and Marina Krim were at a Manhattan court on Monday for the sentencing.

‘Judge Carro, I request in your sentencing decision please follow the law, as you always have, and heed the unanimous decision of the jury, the good people of New York and the family of Lulu and Leo, and make sure she can never leave prison alive,’ Kevin asked. 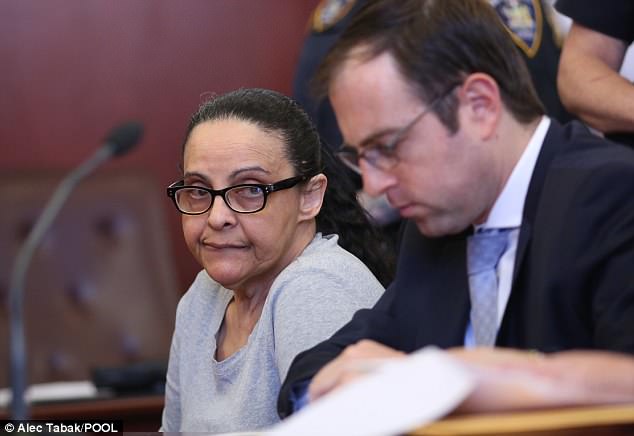 Yoselyn Ortega, 56, showed little emotion as she was sentenced to two consecutive life sentences for the murders of Lucia, six, and Leo, two, five years ago 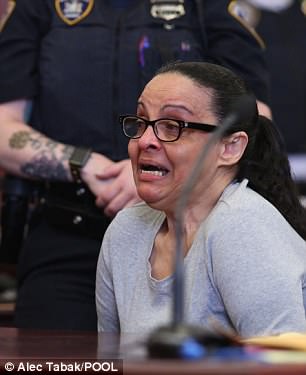 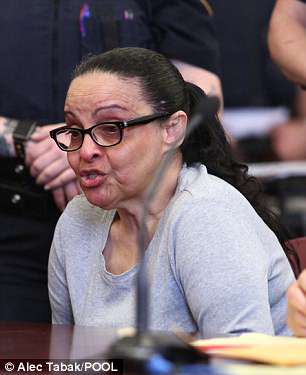 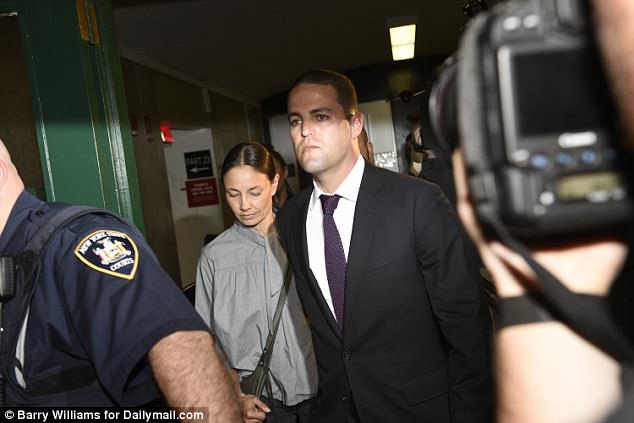 The children’s parents, Kevin and Marina Krim  (pictured leaving court) were at a Manhattan court on Monday for the sentencing 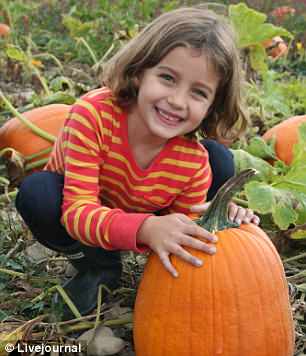 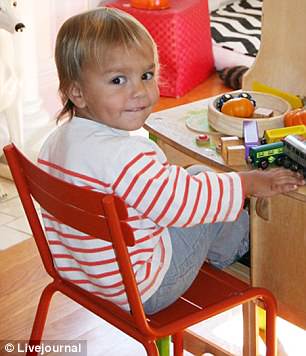 Six-year-old Lucia and two-year-old Leo were stabbed multiple times by the nanny in October 25, 2012

‘The defendant knows nothing of regret or remorse. She should no nothing of hope.

‘The defendant is evil. It is right she should live, rot and die in a concrete cage.

‘Like an ugly dark shadow of Leo and Lulu’s light. It is right she should know, she has gone from hated by the world, to forgotten by the world.’

The only time Ortega, who claimed she was not guilty by reason of insanity, did show any emotion was when she cried earlier in the hearing, telling the court she was finally ‘sorry.’

‘I ask for a good deal of goodness. To God. To Marina. To Kevin,’ Ortega said through an interpreter.

But the judge did not accept her last minute apology, noting to the court that she had refused to apologize over the last five years, calling the case ‘pure evil.’

Prosecutors had also argued that Ortega knew exactly what she was doing on the day of the double murder and had been putting her affairs in order before she attempted to kill herself.

A jury rejected the claims she was suffering from delusions, hearing voices and seeing demons in her trial last month.

On Monday, the children’s dad Kevin, a digital content executive at the television network CNBC, had wiped away tears as he shared heartbreaking memories of his son and daughter – and the devastation the family felt after their lives were cut short.

His face then changed as he described the fury he felt towards the defendant who had shattered his family, and forced them to undergo further pain with the trial.

‘Judge Gregory Carro, this defendant rejected two plea bargains. Marina and I were against these offers, as you know, but we also knew she would refuse them being the malignant narcissist she is, she would never accept responsibly.

‘We also knew she wanted to put Marina and the rest of us through the pain of this trial which has been awful.’

He described the defense as ‘disorderly, callous…. utterly dishonest and brutally cruel.’

His wife Marina said that the nanny had tried to destroy her family, and spoke out against the Ortega’s family members who had recommended her to the family.

She added that their daughter Nessie, who was just three years old when Leo and Lucia, also known as Lulu, were killed.

‘Each time she makes a wish, it’s always for Lulu and Leo to come back to us. Nessie knows that wish will never come true,’ said the mom, fighting to maintain her composure.

She added that the couple’s other two son Felix and Linus, born after the murders, would never get the chance to meet their older siblings. 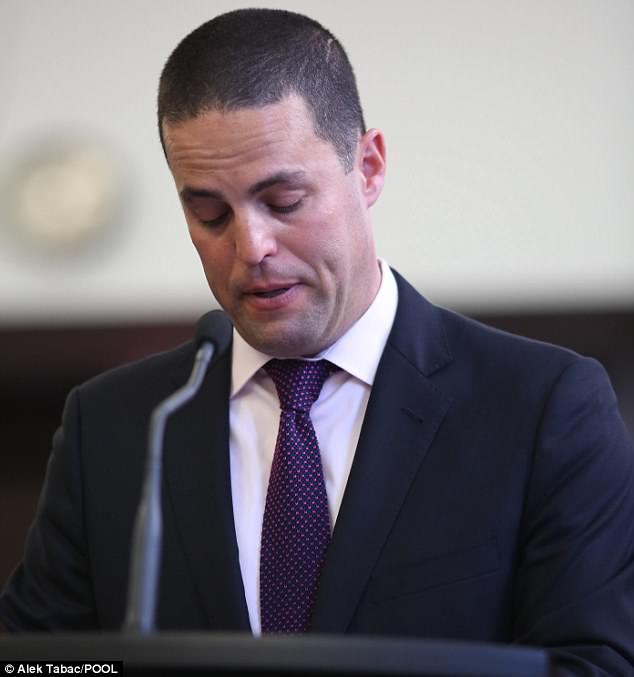 Kevin became emotional at the Manhattan court on Monday for the sentencing of their former nanny, Yoselyn Ortega 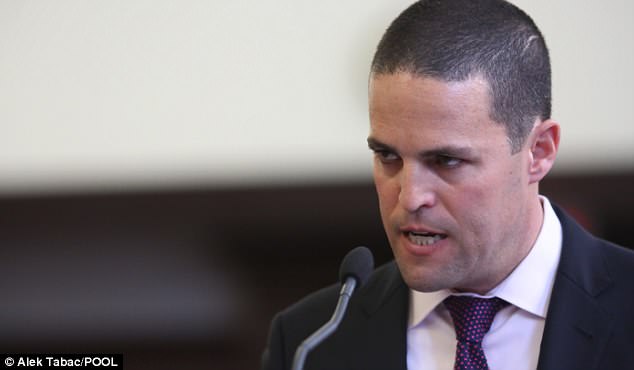 Kevin’s face changed as he described the fury he felt towards the defendant who had shattered his family, and forced them to undergo further pain with the trial 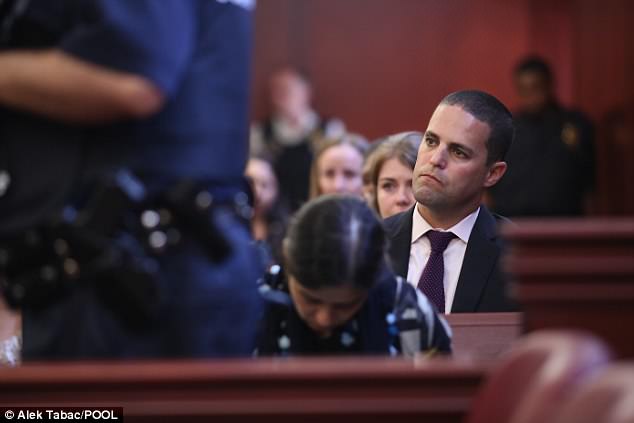 ‘But I see Lulu and Leo living within all three of the kids every day,’ she added.

‘It is so unfair that they are gone, unfair to us, unfair to the world,’ added Kevin.

‘We miss them so, so much. We miss picking Leo up out of his crib, with a happy ‘Mama’ or ‘Dada’ from him and always a big hug.

‘We miss holding their hands as we walked down the sidewalk.

‘We miss attempting to argue them out of a Mr. Softee cone, and losing most of the time.

‘We miss hearing them call out my name and run to hug me when I got home from work.’

The family also spoke about ‘Lulu & Leo’s Law’, legislation that would make lying about childcare experience a crime.

Marina said it was not just Ortega at fault, but her family for recommending her and lying about her experience 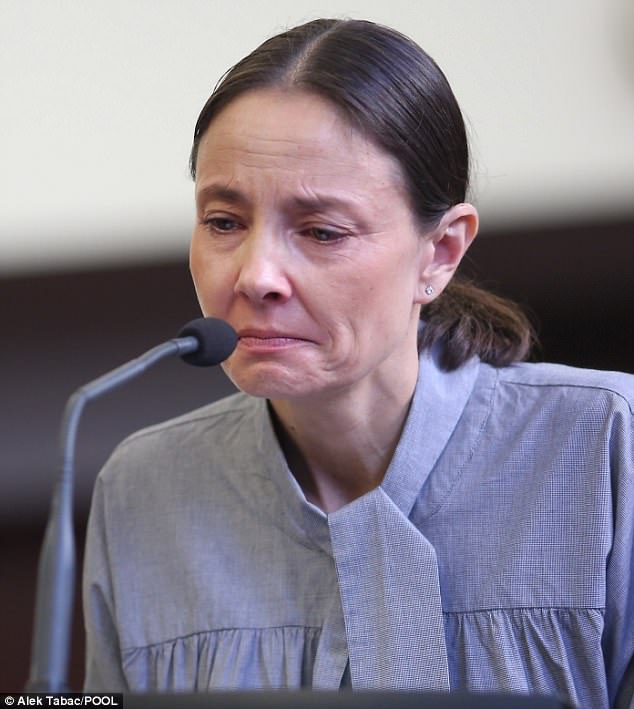 A deeply emotional Marina also spoke in court, saying that she was sad the couple’s other two son Felix and Linus, born after the murders, would never get the chance to meet their older siblings 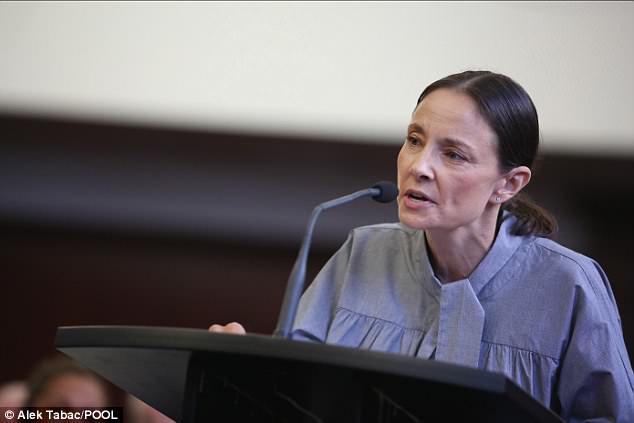 She also spoke about ‘Lulu & Leo’s Law’, legislation that would make lying about childcare experience a crime

‘My family and I, we create and built. The defendant and her family, they destroy and ruin,’ Marina said. ‘The defendant set out to destroy what Kevin and I had created and built — and inspired, happy, thriving family. But she failed.’

Alternate juror Chloe Beck said, according to the New York Post: ‘When I close my eyes, when I blink, I see those children.’

‘Five years ago Yoselyn Ortega stole Leo and Lulu Krim from their parents, their siblings, and our Manhattan community. Leo and Lulu will never live the lives that laid ahead of them, and now their remorseless killer will live the rest of her life in prison,’ he said.

‘Like millions of New Yorkers and generations of working parents before them, Marina and Kevin conducted interviews, required references, and hired a caretaker who earned their trust and looked after their children without incident for more than two years. 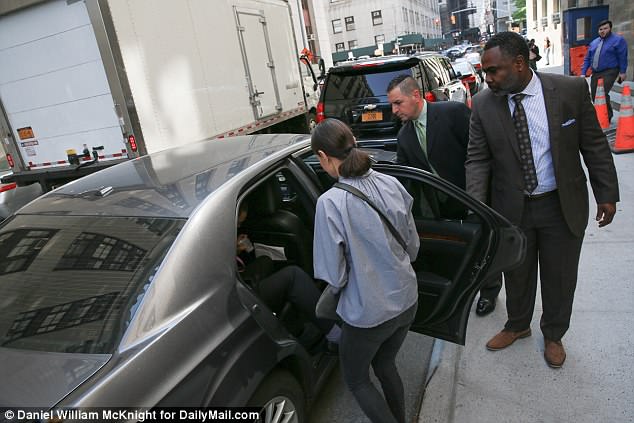 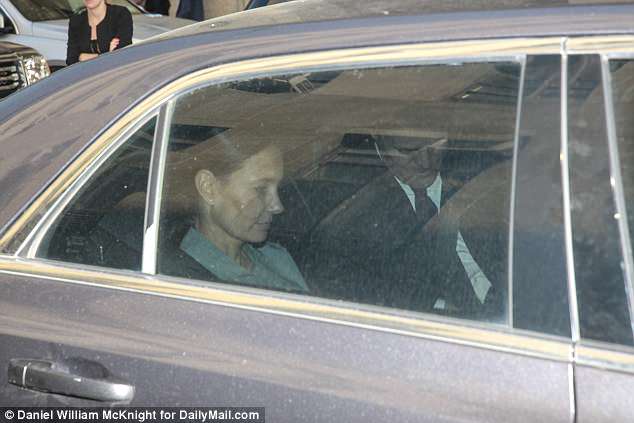 Marina had said that the nanny had tried to destroy her family, and spoke out against the Ortega’s family members who had recommended her to the family

‘Yoselyn Ortega violated that trust in the most horrific way imaginable, bringing an extraordinarily violent end to two young and precious lives, and an unspeakable, enduring loss to the entire Krim family.

‘I would like to express my admiration for Marina and Kevin, whose courage cannot be overstated. In the wake of this inconceivable tragedy, they have turned their pain into purpose, carrying on the legacy of their two children through their determination to help others.

‘They have my steadfast support as they work to improve the safety and integrity of the childcare process for all New Yorkers, and to bring their powerful Choose Creativity curriculum to more communities.’

Ortega worked for the family in their Upper West Side home and had been left alone with Lucia, whose family called her Lulu, and Leo on October 25, 2012, while their mother went to collect their other sister from a swimming lesson.

Marina returned home to find both her children lying dead in the bathtub covered in stab wounds. Ortega had tried to kill herself by stabbing herself in the neck but she survived.

Since the murders, Marina and Kevin have had two more sons. They have also launched the Choose Creativity program in memory of their late son and daughter.

Part of her defense was testimony from her family which included their comments that she was unwell. 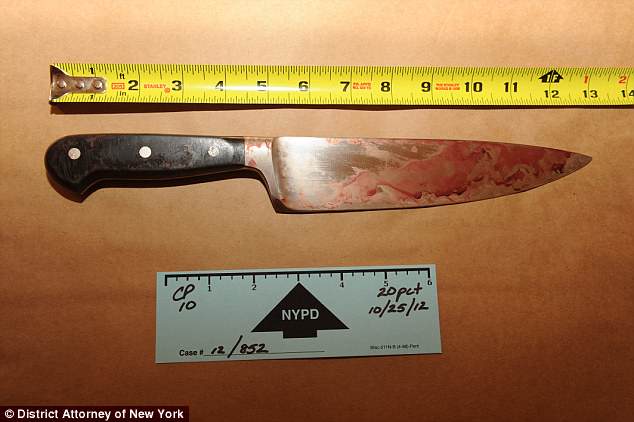 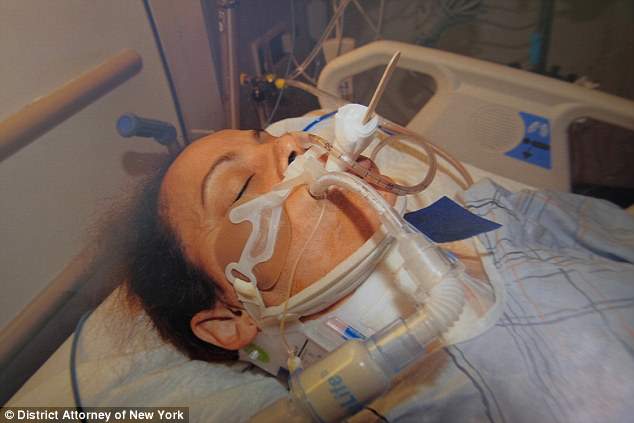 The Krims say they are equally responsible for their children’s deaths because they not only concealed her mental health problems but lied when she was applying for the job by posing as fake references.

They are now campaigning to make it illegal for anyone to lie in a job application for a position in childcare.

‘We were deceived and betrayed by the defendant’s family, who remain wholly unaccountable for their role in the murders of our children,’ Kevin said last month after the verdict.

Juror David Curtis fought back tear as he explained the verdict which took them two days to reach.

‘There were raised voice and a lot of tears but I think we all feel good that we addressed all of the issues and fairly weighed everything that was presented to us,’ Curtis said.