Peace between North and South Korea could rely on Trump, expert says

Will Kim really lay down his ‘Treasured Swords’? North Korea expert Dr ROBERT WINSTANLEY-CHESTERS says he won’t give up his nukes after spending so much money on developing them and it’s down to Trump to achieve peace

Dr Winstanley-Chesters is a Lecturer at the University of Leeds and Research Fellow at Australian National University. Previously he was a Post-Doctoral Fellow of Cambridge University (Beyond the Korean War).

The optics at Panmunjom, of course, today are astounding and the assertion that there will ‘be no more war on the Korean Peninsula’ of the joint declaration heartening.

However, it will surely take a great deal more than some soil from the sacred slopes of Mt Paektu and Mt Halla placed on the roots of a Korean Pine as old as the division itself to heal the fracture between the Koreas.

While the meeting of Kim Jong-un and Moon Jae-in is a dramatic shift in relations after so much confrontation in recent years it is still perhaps too early for unfettered optimism.

A functional solution to the key problem of North Korea for much of the world, its nuclear capabilities and unexpected success in intercontinental ballistic missile design will surely be harder work than this. 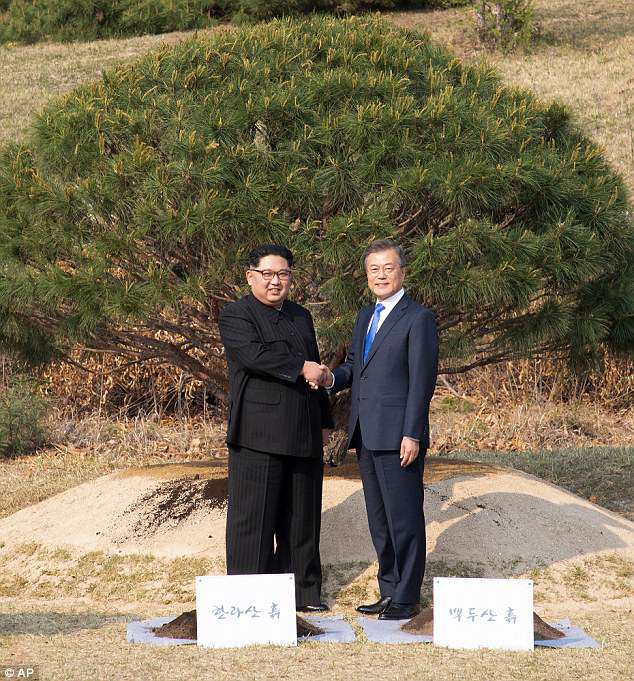 North Korean leader Kim Jong-un and South Korean President Moon Jae-in placed soil from the sacred slopes of Mt Paektu and Mt Halla on the roots of a Korean Pine near the military demarcation line at the border village of Panmunjom, South Korea, on Friday 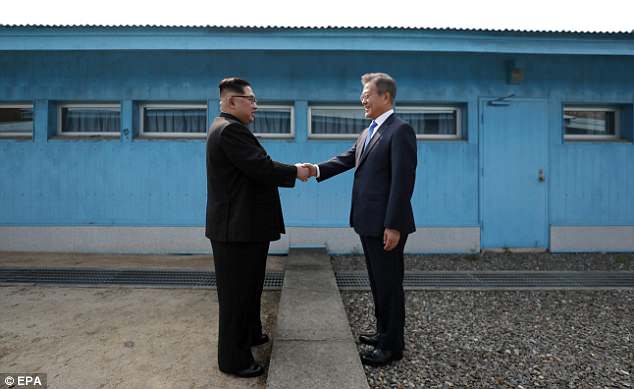 The two leaders’ historic meeting at the DMZ was captured on camera for the world to see. Kim Jong-un shook hands with South Korean President Moon Jae-in before crossing the military demarcation line on the Demilitarized Zone (DMZ) 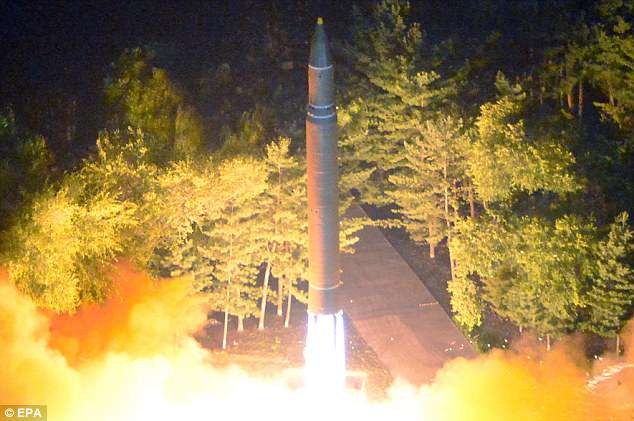 But North Korea expert Dr Robert Winstanley-Chesters believes the two countries are still a long way from achieving a peace treaty. Pictured:  The second test-fire of ICBM Hwasong-14 in North Korea on 28 July 2017

Pyongyang surely cannot have expended so much diplomatic, financial and military capital on its ultimate insurance policy to give it away for smiles and a tasty mousse (even in the shape of a unified peninsula).

Solutions to other North Korean problems objectionable to the wider world will be almost impossible to raise with its government and certainly haven’t made the agenda of this summit.

The world will have to wait for the meeting between Kim Jong-un and Donald Trump to discover quite whether the dissonance between American and North Korean conceptions of ‘denuclearisation’ can be resolved or whether it will solicit a burst of furious 2am tweets.

The fact that Pyongyang has always meant by denuclearisation the withdrawal of the United States nuclear security umbrella from East Asia and the removal of US forces from South Korea has to this moment meant that progress has been impossible. 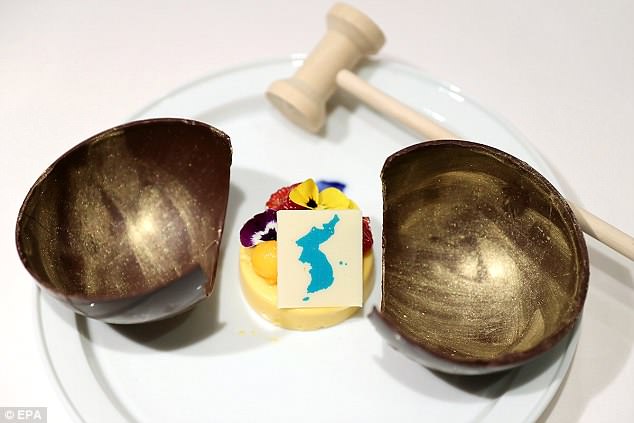 It may be that a US President fond of creative destruction, without a commitment to past patterns and tropes of diplomacy, a tendency towards isolationism and with an intense desire for legacy may decide that it is time for such a dramatic transformation.

We will not know until the day it seems; until Donald Trump looks Kim Jong-un in the eye and decides he’s a guy he can make a deal with. Until then in spite of the optics it is hard to say that much concrete progress has been made.

Extremely well choreographed cheerleaders, spectacular symbolism and an energetic seriousness will not put North Korea’s hydrogen bomb and capable long range missiles back in the box, only a serious commitment to a complicated, intrusive and shared future on the part of both North Korea and the United States, one governed by Ronald Reagan’s immortal assertion of the need to ‘trust but verify.’ 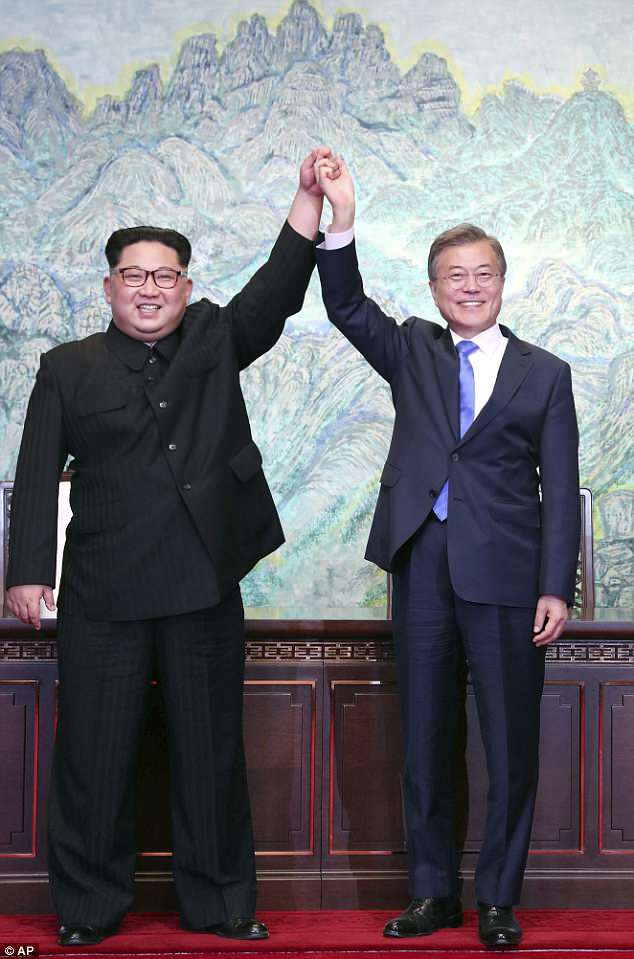 This is not to say that the two Koreas are not entirely serious about their moment together in Panmunjom or their future journey.

In fact aside from the various commitments to peace and brotherly love (heard at a number of such moments before), the Panmunjom Joint Declaration between the two leaders of Korea seeks a resolution to one of the most intractable issues on the Korean peninsula.

The Northern Limit Line, the maritime border demarcation between South and North Korea has always been an issue for Pyongyang and is on the face of it profoundly unfair.

Real movement and progress there would perhaps demonstrate that real changes are afoot, new possibilities available, a new future on the way.

We must all wait for that of course, with a little scepticism in hand, for Kim Jong-un’s appointment with America’s most unusual Commander in Chief.

Only then will we know, in North Korea’s words whether the ‘Treasured Swords’ will be put away. While events have been extraordinary, peace is not built in a day and between the Korea’s it was certainly not built this day.

This morning we awoke to the remarkable images of North Korean leader Kim Jong-un and his South Korean counterpart Moon Jae-in welcoming each other with gleaming faces and warm handshakes at the border between the two countries.

Do not underestimate the significance of this moment not just in relation to nuclear disarmament on the Korean peninsula but also in terms of the willingness of the North Korean regime to have improved lines of communication with international governments and their publics.

‘Rocket man’, as Donald Trump famously called Kim, and his father Kim Jong-il, have suffered negative onslaughts by some quarters of the mainstream news and entertainment media that have attempted to frame them as illusive and unstable psychotics bent on creating chaos within the world system through the threat of nuclear holocaust. Think: Team America: World Police and Kim Jong-il portrayed in the style of Bond villain Ernst Stavro Blofeld complete with long-haired white cat. 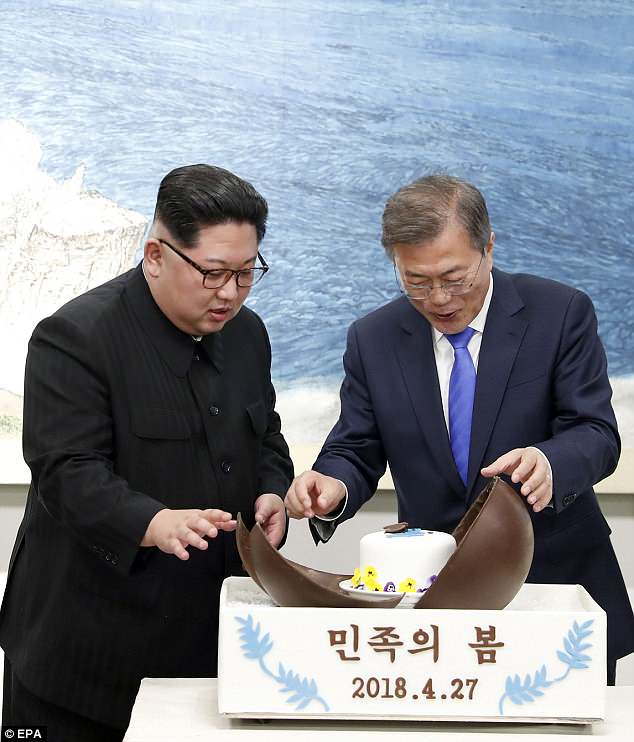 Indeed, until recently, the North Koreans had been stoking that media fire by issuing statements and providing quotes that many of us found rather unusual. Ri Yong-ho’s ‘sound of a dog barking’ response to US threats being a case in point.

However, on Friday a different North Korean leader emerged. Kim, in his photo opportunities with Mr. Moon, looked very human, rather than the unknown and unpredictable despot that he has been profiled as.

That human side to North Korea’s leader is an important PR step in the tense political relationships that make the Korean peninsula a focal point of regional tumult, and we would do well to acknowledge the efforts made by the North Koreans in this regard.

Diplomatic silence is one of the most awkward of political silences and makes a lot of people very nervous. Thus, talking to other leaders, making media appearances and being seen to be willing to negotiate, however staged-managed it all might be, benefits the prospects for peace as it lowers the temptation for others to start rumours or make erroneous judgments over the adversary’s motives to fill that communications void.

Nevertheless, increased communication can also lead to increased scrutiny and critique and so North Korea should be careful what it wishes for.

We saw in the lead up to the 2008 Beijing Olympics increasing focus on China’s human rights record and its activities in its Western regions like Tibet. However, the Beijing Olympics was a key moment in China’s attempt to manufacture ‘soft power’ and was the culmination of the growth in China’s international confidence since the start of its social, economic and political reforms in 1978 some 30 years before it hosted the world’s greatest sporting spectacle.

North Korea is a long way from this. Indeed, their society remains largely closed off to outsiders and those who are allowed in are under strict chaperone. This is for good reason as most people would not like what they saw if they were allowed open access to the country.

People in North Korea remain very poor and have had to contend with significant food security issues in their recent history. By contrast, today Mr. Kim appeared to be hugely overweight with this epitomising the excesses that have long created a credibility gap between Communist regimes and their citizens.

Perhaps, rather than walking confidently into the media age then, North Korea is moving with a laboured and uncertain waddle towards the future.

Who is Sky Brown? 13-year-old teen sensation with 800k Instagram followers lives in California and stars for Team GB