Pensioner, 83, who was about to take her broken vase to a charity shop after keeping it in her garage for 11 years is stunned to see it sell for £87,000

A pensioner’s broken vase – which she was planning to give to a charity shop – has sold for £87,000.

Anne Beck, 83, inherited the cracked and chipped ornament from her grandfather – an antique restorer who never got around to repairing it.

Mrs Beck kept it in her garage for 11 years, too embarrassed to display it in her house in East Sussex. She eventually decided to give away the crumbling item for free. 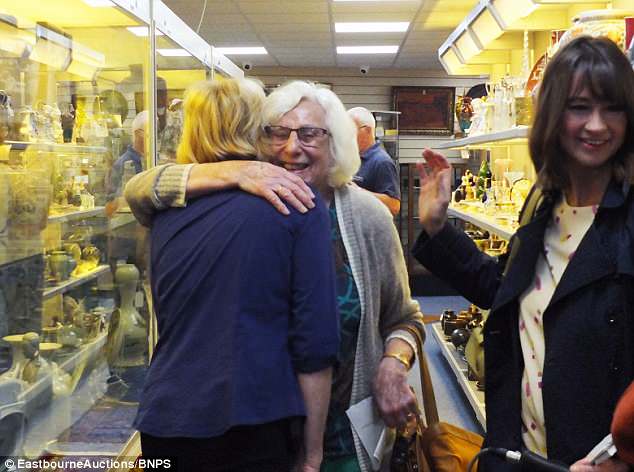 Anne Beck, 83, hugs auctioneer Jeanette May after being told her cracked and chipped vase had sold for a jaw-dropping £87,000

But a chance conversation at an auction house convinced her to put it up for sale, with a modest estimate of between £90 and £120.

It transpired the relic, depicting a Chinese mythical god who lives in the clouds receiving gifts for his birthday, was made for Emperor Qianlong in the 1700s.

And the priceless 12-inch hand-painted heirloom was then snapped up by a German-based Chinese buyer for a staggering £70,000, plus £17,000 in fees. 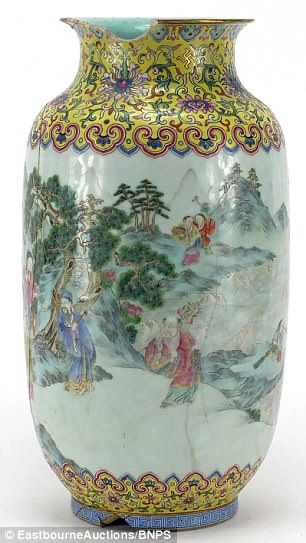 The priceless heirloom, which was made for the Emperor of China during the 1700s

Had the yellow floral vase not been damaged it would have been worth between £250million and £500million, according to experts.

‘After I consigned it for auction I thought that £100 would be nice,’ said Mrs Beck.

‘So I was absolutely amazed when I found out what it sold for. I couldn’t quite believe it. I had a sit down and a cup of coffee afterwards but am still in a bit of a daze now.’

Mrs Beck had been on her way to drop off the vase at the charity shop when she stopped off at Eastbourne Auctions.

They were holding a valuation day and an expert encouraged her to try her luck at auction.

Jeanette May, of Eastbourne Auctions, described the life-changing moment when Mrs Beck took a detour to the auction house.

‘The vendor came in with these glass finger bowls and said she had a broken vase in the back of her car that she was taking to a charity shop,’ she said.

‘Our assistant went out and saw it rattling around on the back seat and said “oh that’s nice.” He knew it was good but didn’t realise just how good.’

Mrs Beck, a widow, plans to spend some of her enormous auction takings on her two children and four grandchildren, have a family celebration and give some to charity. 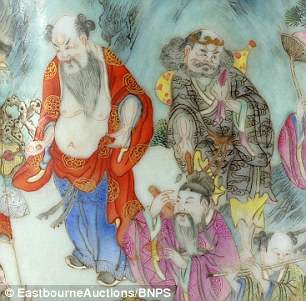 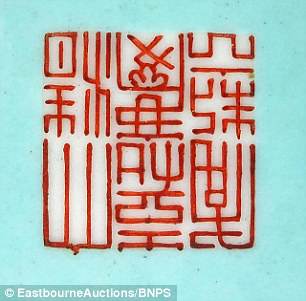 The vase depicts a Chinese mythical god who lives in the clouds receiving gifts for his birthday (left). The ornament’s dynasty stamp (right) confirms it was made during the 1700s in China