The historic home of Charles Darwin could become a vegan museum dedicated to ‘animal empathy’ – if the owners donate it to PETA.

Animal charity PETA has penned a letter to the owners of the famous biologist’s Ramsgate cottage urging them to consider turning it into a space dedicated to animal rights.

The Grade II listed home is where Mr Darwin studied barnacles as part of his ground-breaking scientific research which paved the way for modern understanding of human evolution.

PETA’s founder Ingrid Newkirk wrote in the letter: ‘While the theory of evolution is Darwin’s legacy, many people don’t know that this groundbreaking theory laid much of the foundation for modern animal rights, changing our perception of other animals and illuminating the fact that humans are animals. 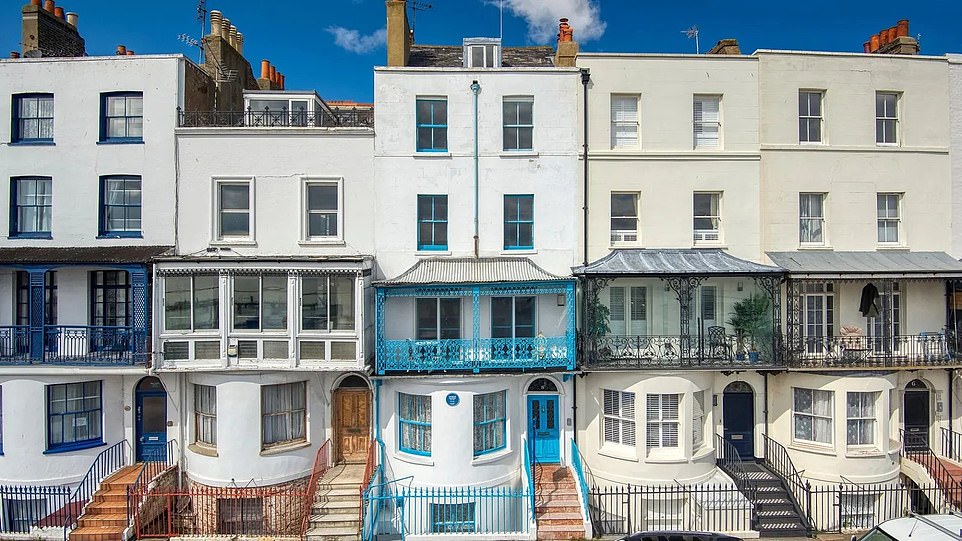 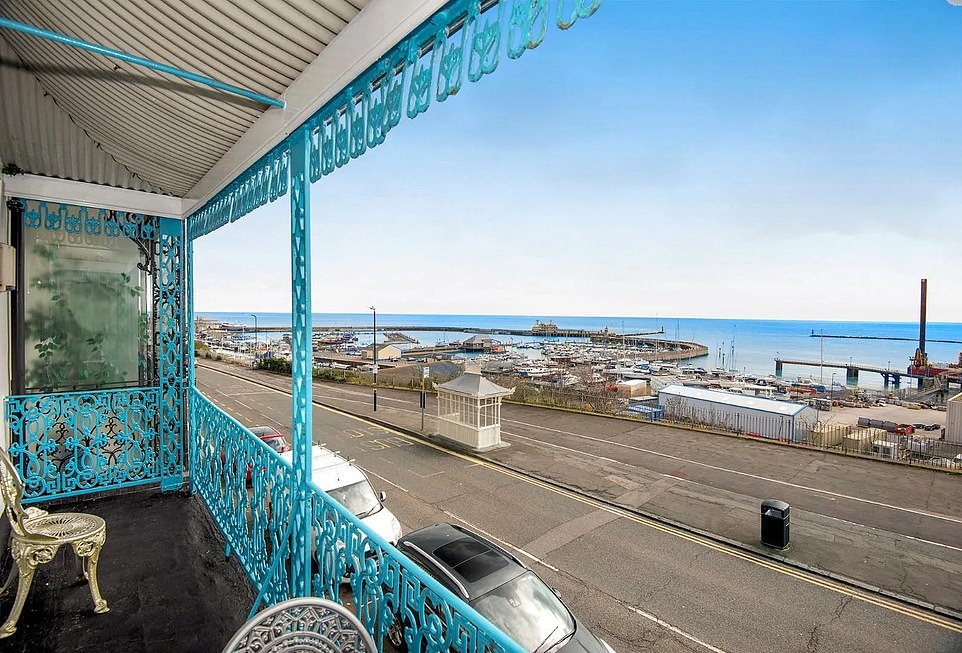 PETA have asked the estate agents if they would consider donating the home, with a stunning view of the sea, to the charity

‘It is because of Darwin’s research that people started to realise that other animals are like us in all the ways that matter – we all feel pain, engage in play, parent, and experience emotions such as joy, love, loneliness, and fear.

‘This led to the understanding that all animals should be treated with compassion and respect and that the exploitation of others is an evil to overcome.’

The letter adds: ‘Darwin once wrote, ‘I have all my life been a strong advocate for humanity to animals’.’

The museum would be home to exhibits where science-lovers could learn how Darwin laid the foundation for legislation to regulate experiments on animals in England.

Some of his work led to new laws created to reduce animals’ suffering, and Darwin also campaigned against cruel steel-jaw traps used by game wardens and fur trappers that crush animals’ limbs.

PETA says Darwin’s theory of evolution established humans as just one animal among many – which they call ‘the very foundation of the modern animal rights movement’. 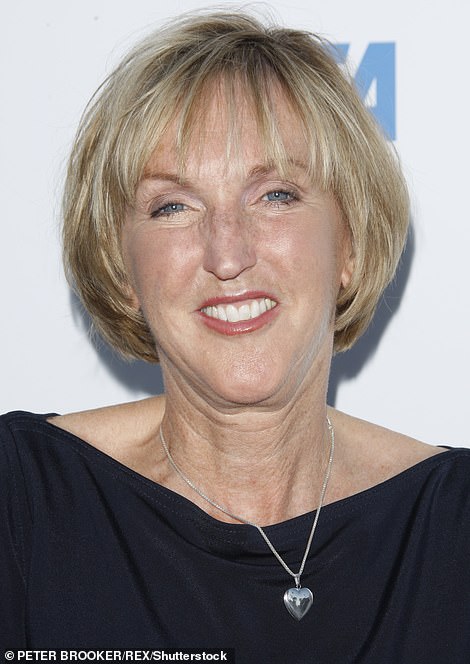 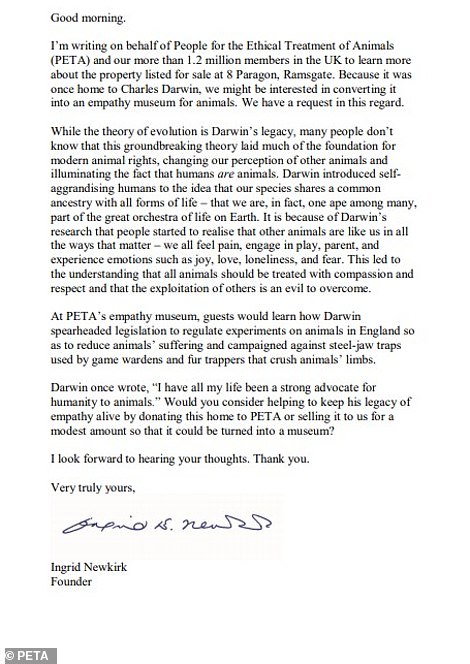 In a letter written to the estate agents who are selling Darwin’s property (right), PETA president Ingrid Newkirk (pictured left) said it is because of Darwin’s research that people started to realise ‘other animals are like us in all ways that matter’ 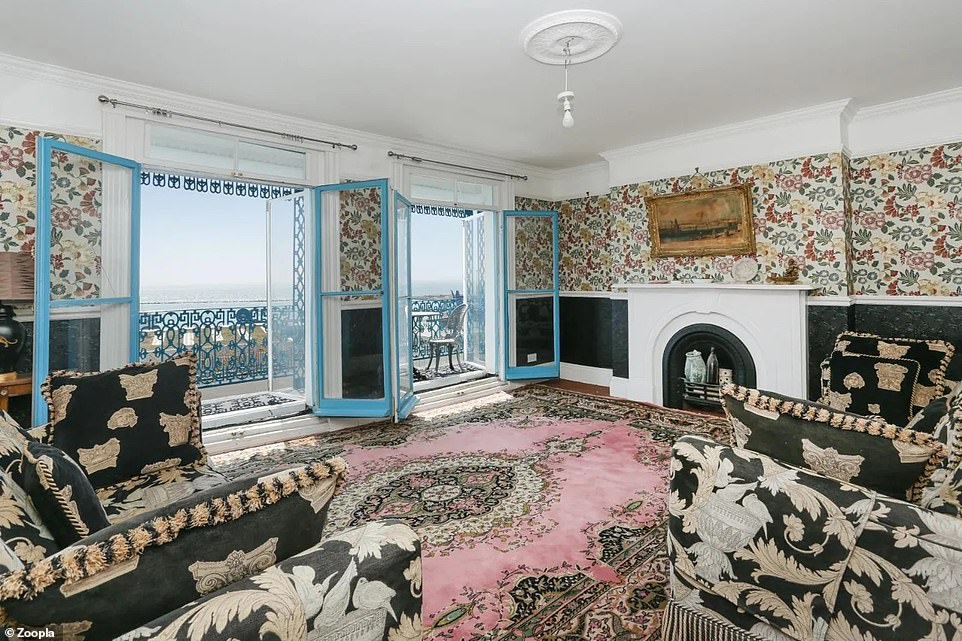 Pictured: the patio doors in the living area lead out onto the terrace and feature some stunning sea views off the Kent coast 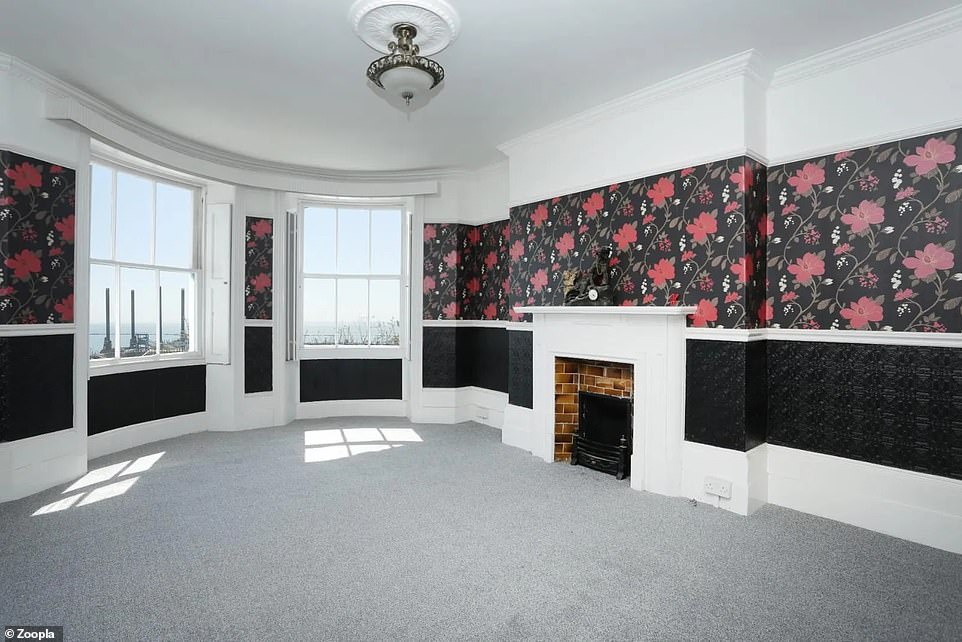 Spacious: the ground floor of the six-storey property has a large living area with a bay window and original shutters

They say the museum would celebrate his legacy by reminding visitors that ‘we’re all part of the great orchestra of life on Earth’.

The charity has asked estate agents Miles & Barr Exclusive to donate the cottage to them or sell it for a ‘modest amount’.

It has stunning sea views of the gorgeous Kent coast as well as boasting six bedrooms, original fireplaces and sash windows.

On the exterior of the building, there is a blue plaque commemorating its former famous resident who is renowned for his theory of evolution, stating he stayed at the home in 1850 – a few years before his most famous work The Origin of the Species was published. 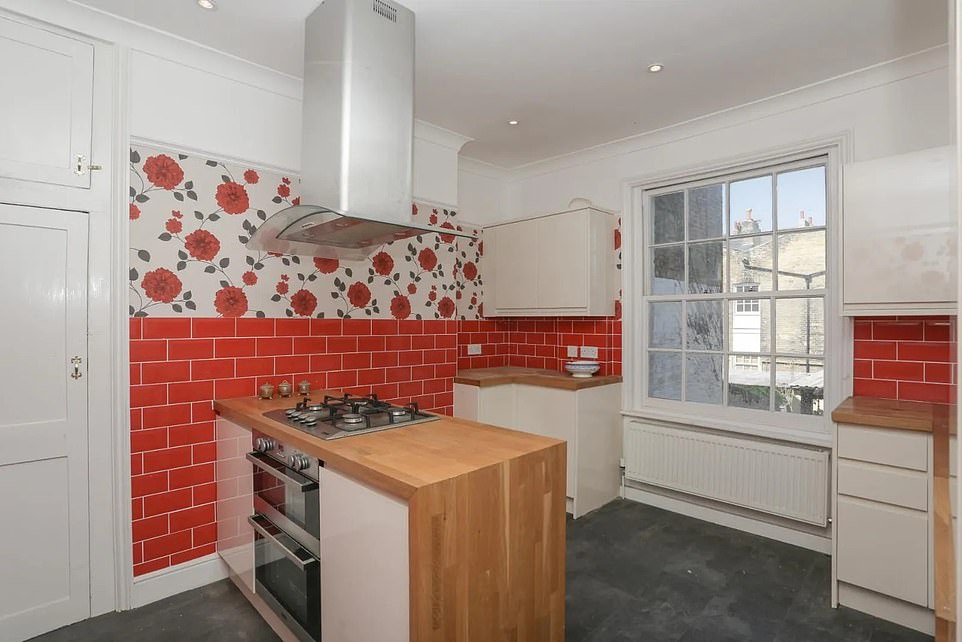 Pictured: the six-bedroom property retains some original features, including the sash window in this kitchen 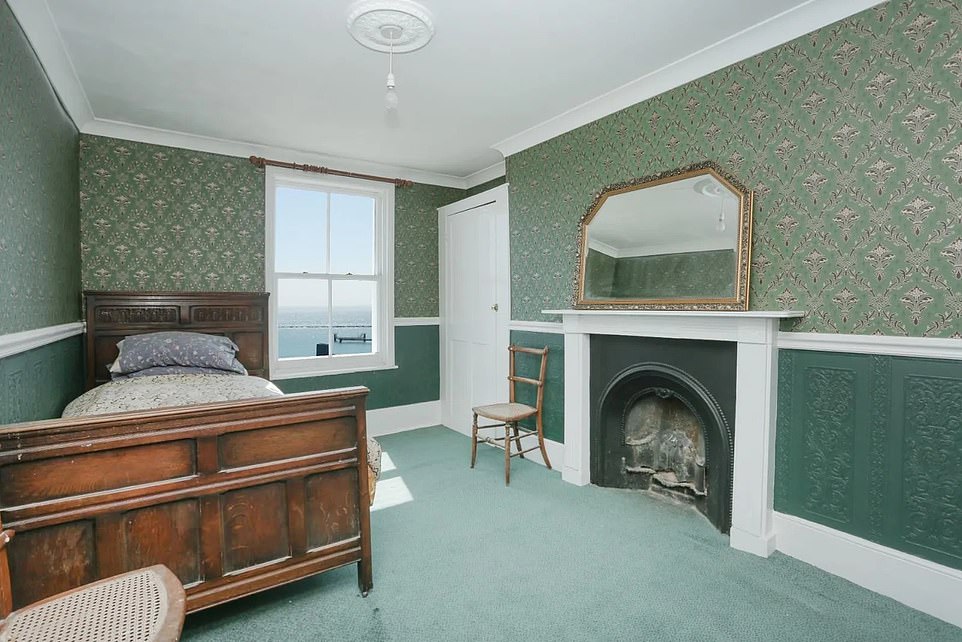 The property, which is on the market for £925,000, enjoys a central location in Ramsgate and has a total of six bedrooms 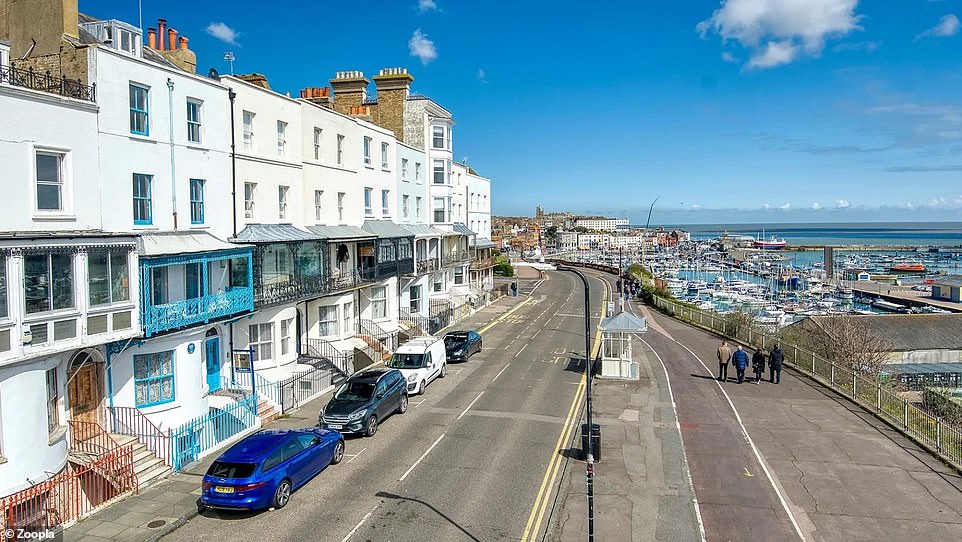 He went to Ramsgate with his family for a short holiday and carried out a study of barnacles during his stay there.

Tom Parker, of property website Zoopla, said: ‘This seaside property is steeped in history and was once the residence of Charles Darwin, who would have enjoyed its elevated sea views from the spacious balcony and bedrooms.

‘Darwin famously spent eight years studying barnacles and the seafront location of this property would have made the perfect base for his research.’

CHARLES DARWIN: THE BRITISH NATURALIST WHO INTRODUCED THE IDEA OF NATURAL SELECTION

Charles Robert Darwin was born in Shrewsbury, Shropshire, the fifth of six children of wealthy and well-connected parents.

One of his grandfathers was Erasmus Darwin, a doctor whose book ‘Zoonomia’ had set out a radical and highly controversial idea, that one species could ‘transmute’ into another. Transmutation is what evolution was then known as.

In 1825, Charles Darwin studied at Edinburgh University, one of the best places in Britain to study science.

It attracted free thinkers with radical opinions including, among other things, theories of transmutation.

Darwin trained to be a clergyman in Cambridge in 1827 after abandoning his plans to become a doctor, but continued his passion for biology.

In 1831, Charles’ tutor recommended he go on a voyage around the world on HMS Beagle.

Over the next five years Darwin travelled five continents collecting samples and specimens while investigating the local geology.

With long periods of nothing to do but reflect and read, he studied Charles Lyell’s Principles of Geology, which had a profound impact.

The trip also began a life of illness after he suffered terrible sea sickness.

In 1835, HMS Beagle made a five-week stop at the Galapágos Islands, 600 miles off the coast of Ecuador.

There, he studied finches, tortoises and mockingbirds although not in enough detail to come to any great conclusions.

But he was beginning to accumulate observations which were fast building up.

On returning home in 1838, Darwin showed his specimens to fellow biologists and began writing up his travels.

It was then that he started to see how ‘transmutation’ happened.

He found that animals more suited to their environment survived longer and have more young.

Evolution occurred by a process he called ‘Natural Selection’ although he struggled with the idea because it contradicted his Christian world view.

Having experienced his grandfather being ostracised for his theories, Darwin collected more evidence, while documenting his travels, until 1851.

He decided to publish his theory after he began to suffer long bouts of sickness.

Some historians suggest that he had contracted a tropical illness while others felt that his symptoms were largely psychosomatic, brought on by anxiety.

In 1858, Darwin received a letter from Alfred Russel Wallace, an admirer of Darwin’s from reading about his Beagle Voyage.

Wallace arrived at the theory of natural selection independently and wanted Darwin’s advice on how to publish.

In 1858, Darwin finally went public giving Wallace some credit for the idea.

In 1859, he published his theory on evolution. It would become one of the most important books ever written.

Darwin drew fierce criticism from the Church and some of the press. Many people were shaken by the book’s key implication that human beings descended from apes, although Darwin only hinted at it.

In 1862, Darwin wrote a warning about close relatives having children, he was already worried about his own marriage, having married his cousin Emma and lost three of their children and nursed others through illness.

Darwin knew that orchids were less healthy when they self-fertilised and worried that inbreeding within his own family may have caused problems.

He worked until his death in 1882. Realising that his powers were fading, he described his local graveyard as ‘the sweetest place on Earth’.

He was buried at Westminster Abbey.