Ruling is the first conviction for police killings in the Philippines drug crackdown that’s claimed thousands of lives. 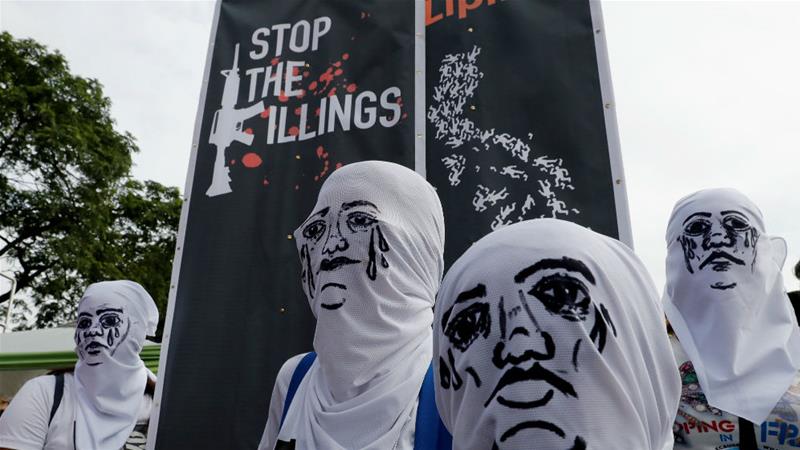 A Philippine court on Thursday sentenced three police officers to up to 49 years in jail for the murder of a 17-year-old high school student, the first to be convicted in President Rodrigo Duterte’s controversial drug war.

The Caloocan City regional trial court declared the three policemen guilty for the killing of Kian Lloyd delos Santos in August 2017 in a dark, trash-filled alley in a northern suburb in the capital, Manila.

“A shoot first, think later attitude can never be countenanced in a civilised society. Never has homicide or murder been a function of law enforcement. The public peace is never predicated on the cost of human life,” said the ruling by Judge Roldolfo Azucena.

This was the first case of what human rights advocates say was an extrajudicial killing carried out by state agents in the 29-month war on drugs, which saw close to 5,000 people dead in police anti-drug operations.

Police reject allegations the killings were executions, saying the drug peddlers and users were killed in shootouts, and they were acting in self-defence.

The death of the teenager delos Santos stirred unprecedented public attention to what activists say are executions and systematic abuses by police backed steadfastly by Duterte.

“We respect the decision of the court. We don’t tolerate any erring police officers,” said Benigno Durana, national police spokesman, adding the police force “stand fully behind police officers engaged in the drug war, who are doing their jobs within the bounds of the law.”

Duterte, a firebrand leader who unleashed the ferocious war against illegal drugs after coming to power in June 2016, has more than once said he would not allow police officers to go to jail for killing drug users and pushers.

But shortly after the verdict was handed down, Duterte’s spokesperson Salvador Panelo said: “This is murder, there is intention to kill. The president would never tolerate that.”

Duterte’s government has repeatedly said there was no declared policy to kill drug users and dealers.

“The conviction of the three police officers for murdering Kian de los Santos is a victory for justice, but it is not enough. The killings must stop,” said Jose Manuel Diokno, chairman of the Free Legal Assistance Group (FLAG).

FLAG has questioned the legality of the drug war before the Philippine Supreme Court.

Delos Santos was found dead in an alley with a gun in his left hand. Security cameras showed the officers aggressively escorting a male matching delos Santos’ description in the direction of the spot where he was killed.

“Justice was served for my son,” Kian’s mother Lorenza delos Santos told reporters outside the courtroom. “We were able to prove that my son was innocent of all the accusations hurled against him.”

Others also praised the court ruling.

“This is a light in the darkness. Despite the gruesome climate of killing and impunity in the country, this verdict sends the message that there is hope and justice,” said opposition Senator Risa Hontiveros.

Carlos Conde, Philippines researcher for Human Rights Watch, told AFP news agency: “This is a warning to the Philippine National Police that they better follow due process and respect the rights of suspects.”