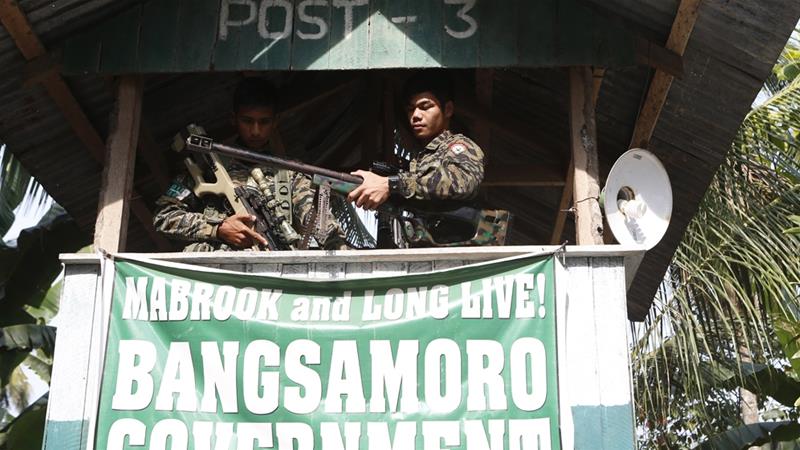 Leaders of the Philippines’ largest Muslim rebel group have warned of a growing frustration in the southern island of Mindanao over the delay in the implementation of a 2014 peace agreement it signed with the government.

“This is precisely why some of our former comrades bolted from us, and how they are fighting with us because they are frustrated, so to speak, with the way the government is handling the negotiation,” Jaafar, who is one of the main authors of a proposed Muslim autonomy law, was quoted as saying by local news.

For Ghazali, the proposed law is “the most civilised and peaceful way” to end the decades-long conflict in the country’s south, and prevent more clashes, such as those against the BIFF, from breaking out.

“We are fed up, to be truthful to you,” he said. “We are tired of corruption, we are tired of nepotism and all things that hold back our Muslim homeland.”

He pleaded to give the Muslim minorities a chance to catch up with the rest of the country in terms of economic progress.

President Rodrigo Duterte has committed to support the autonomy law, and promised to press Congress to approve it.

The rebels, who dropped their secessionist bid in exchange for broader autonomy, signed a pact with the government to establish a region with more powers and funding for minority Muslims in the south of the predominantly Roman Catholic nation and end a decades-long bloody rebellion.

The commandos managed to kill top Malaysian “terror” suspect Zulkifli bin Hir, who had long been wanted by the United States, but the large number of police deaths sparked public outrage and prompted politicians to stall passage of the autonomy bill.

During the Duterte administration, the passage of the autonomy law was stalled anew after armed fighters belonging to the Abu Sayyaf Group and Maute group, which had pledged allegiance to the Islamic State of Iraq and the Levant (ISIL, also known as ISIS) group, launched a siege of a major city in Mindanao.

The siege of Marawi lasted for five months and left about a thousand people killed, including over a hundred soldiers.

The conflict has left about 150,000 people dead and stunted development in the resource-rich but poverty-wracked region.

A previous peace agreement in 2008 was struck down by the Philippines’ Supreme Court, which rejected it as unconstitutional, leading to renewed fighting.