Manila, Philippines – Nearly three million Filipinos from the country’s Muslim-majority southern region are set to decide on a new law which would place them under a substantially more autonomous regional government.

Monday’s plebiscite on the Bangsamoro Organic Law could make or break the decades-old peace process between the national government and the Moro Islamic Liberation Front (the Front), which started out as a secessionist armed movement in the southern island of Mindanao in the late 1970s.

If the “yes” vote wins, the Bangsamoro, which means Moro nation, will replace the existing Autonomous Region in Muslim Mindanao (ARMM), which has been criticised as merely nominal, and failed to end the violent conflict that has left at least 120,000 people dead over the past five decades.

On paper, the proposed new Bangsamoro is a more powerful and possibly larger political unit than the ARMM. It will have its own parliament, some exclusive powers previously held by the government in Manila, and a significantly larger share of local revenues.

Above all, it will mean the end of the Front’s armed struggle, with the decommissioning of its 35,000 troops and its leaders taking positions in the new civilian government.

The proposed law also has the backing of President Rodrigo Duterte with his spokesperson confirming it as “a historic piece of legislation in our quest for lasting peace in Mindanao as this would correct the historical injustices committed against the Moro people”.

Numbering roughly six million, the Moro people are considered a minority among the Philippines’ population of more than 100 million.

They consist of about a dozen ethnolinguistic groups native to the southwestern Mindanao region, bound together by their practice of Islam in the predominantly Christian archipelago.

A history of prejudice and neglect by the mainstream government has reduced the Moro homeland into one of the country’s poorest regions. More than half of their population live below the poverty line, according to government data.

The current Moro rebellion began in 1969 with the establishment of the Moro National Liberation Front (MNLF). Led by the charismatic university lecturer Nur Misuari, the group fought the government for an independent state. 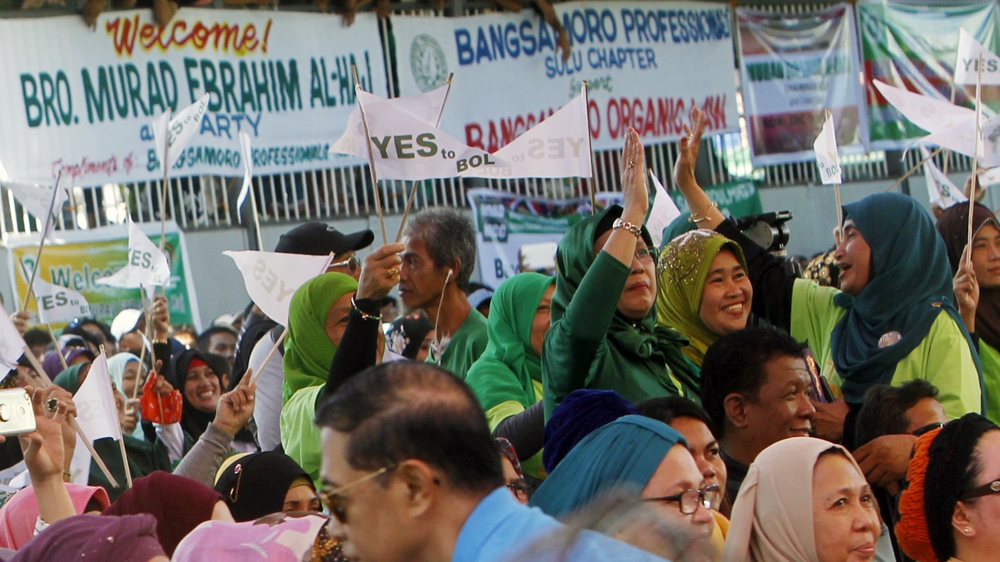 The fighting caused heavy losses and massive devastation in Moro communities, with the MNLF citing atrocities by government forces under the Philippine dictator, Ferdinand Marcos.

When the MNLF and the government agreed on autonomy in 1976, a faction of the group broke away to form the Moro Islamic Liberation Front the following year and continued fighting for secession.

In 1989, the government under President Corazon Aquino established the ARMM.

However, only a fraction of the Moro territory, four provinces out of more than a dozen, voted for inclusion in the autonomous region.

Dissatisfaction with the ARMM’s limited authority became fodder for several other armed groups to continue the rebellion and in some cases, to engage in violent banditry.

With the MNLF focused on administering the ARMM, the Front grew to become the largest rebel group in the country and became the frontrunners of the Moro cause. Misuari, the Muslim rebel leader, himself became the regional governor in 1996.

Fighting between the Front and the government went on throughout the 1990s and early 2000s, when President Joseph Estrada declared “all-out war” against the group.

On-and-off negotiations came to a head in 2012 with a basic agreement to establish a stronger autonomous region, which both sides firmed up with more detail in 2014.

The Front hoped it would embody their people’s long struggle for self-determination and outdo the ARMM, which then-President Benigno Aquino called a “failed experiment”.

A much better deal

A bungled 2015 police operation to arrest a Jemaah Islamiyah-linked fighter in a Front-held area of Maguindanao province dampened public confidence in the group, and the law to create the Bangsamoro sat out several legislative cycles under Aquino’s successor, Rodrigo Duterte.

The process picked up again in 2017, after the five-month siege of Marawi City by ISIL-linked fighters highlighted the need for a final peace deal.

After gruelling negotiations between legislators and a Front-led Bangsamoro transition panel, Duterte signed the Bangsamoro Organic Law in July 2018.

The Bangsamoro will have a parliamentary government, a justice system based on Islamic law, a 75 percent share of local revenues and a yearly grant from the national government equivalent to five percent of the entire country’s revenues.

In Monday’s plebiscite, people from several areas excluded from the ARMM will have an option to vote for inclusion in the Bangsamoro, which could expand its territory.

Around 20,000 police and military personnel will guard polling areas, even as the region remains under martial law, to fend off threats from other armed groups – secessionists that would pounce on the chance at supremacy should the Bangsamoro and the Front fail.

But the Front and the government are confident they have struck a much better deal than their predecessors, and that it will have the people’s support.

When the law passed in July, the Front panel chairman Ghazali Jaafar said, “We are satisfied. It is not a perfect law, but it is good to start with.”