An incredibly moving photograph album of a grieving family’s pilgrimage to the Western Front a decade after the First World War has been uncovered.

In 1928 the British Legion organised the ‘Great Pilgrimage’ to mark the 10th anniversary of the end of the war which saw thousands of families from Britain travel to France and Belgium.

Included on this trip was Horace Turner, who returned to Bethune Town Cemetery to visit the grave of his brother Harold, whose life he was unable to save 12 years earlier.

The two siblings, of the Hertfordshire Regiment, fought side-by-side in the trenches, with Harold, 19, vowing to his parents to take care of his younger brother when the pair first volunteered in 1914, after war was declared.

Yet it was 17-year-old Horace who ended up cradling his dying brother in May 1916 in the Festubert trenches after he was mortally wounded by a German sniper on the lookout for the slightest of movements.

The brothers would have most likely been there to help in the Battle of Festubert in Ypres Salient, which occurred throughout the end of May, and resulted in the gains of less than one kilometre of territory, while at a cost of 16,000 Allied casualties.

The album has recently been dug out of the Turner family archive and loaned to Herts at War, a Lottery-funded project in Hertfordshire, which aims to tell untold stories from the First World War. 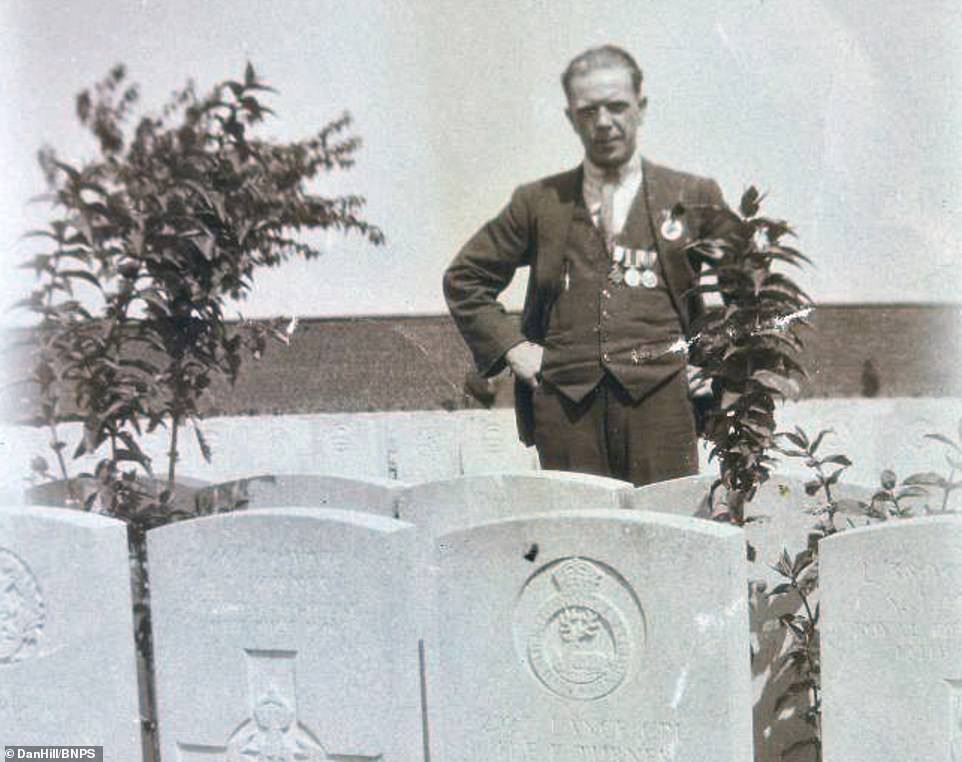 One of the most emotional black and white pictures is of war veteran Horace Turner in 1928 as he stands over the grave of his older brother Harold whose life he was unable to save 12 years earlier. The British Legion organised the ‘Great Pilgrimage’ to mark the 10th anniversary of the end of the war which saw thousands of families from Britain travel to France and Belgium 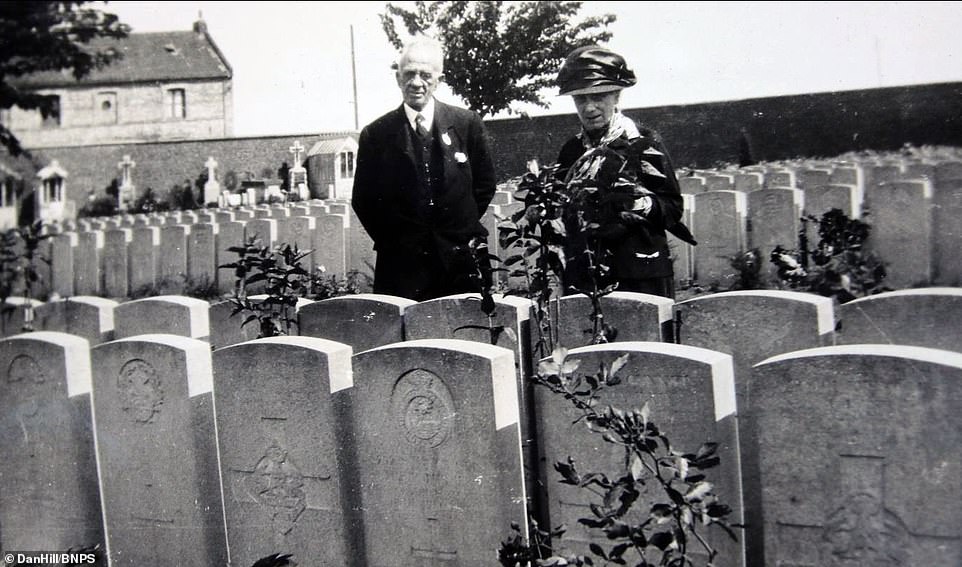 Attending the graveside at Bethune Town Cemetery along with Horace were his grieving parents, Frank and Jemima. For them, this was a trip worth documenting as it was the first time they’d be visiting their loved one’s final resting place 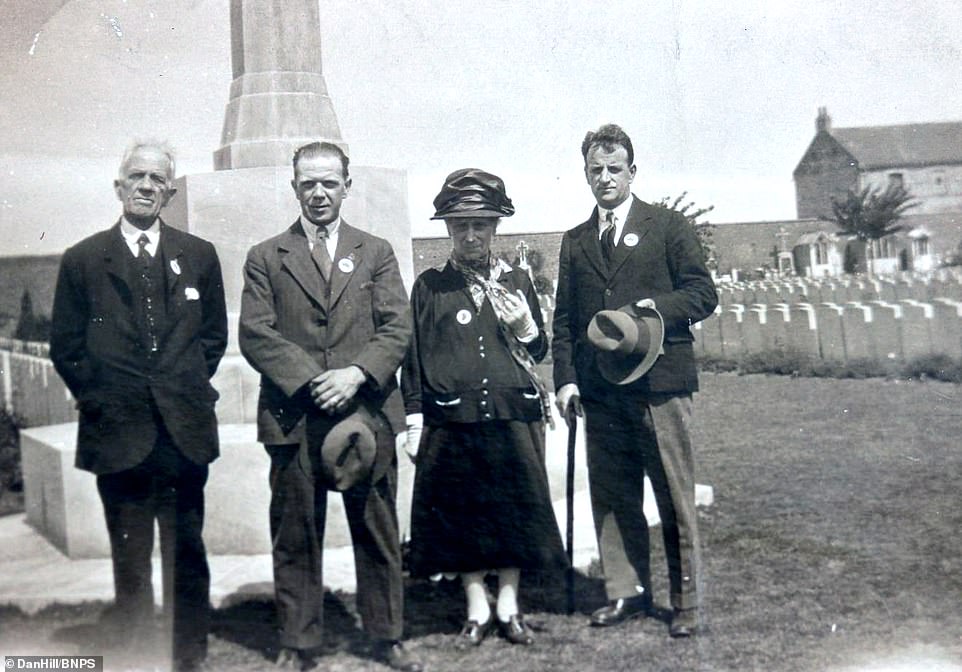 Dressed in all their finery, whole families were often eager to pay their respects to their lost soldiers, with Horace and his parents being joined by his brother-in-law as they stood together at the memorial placed within the cemetery 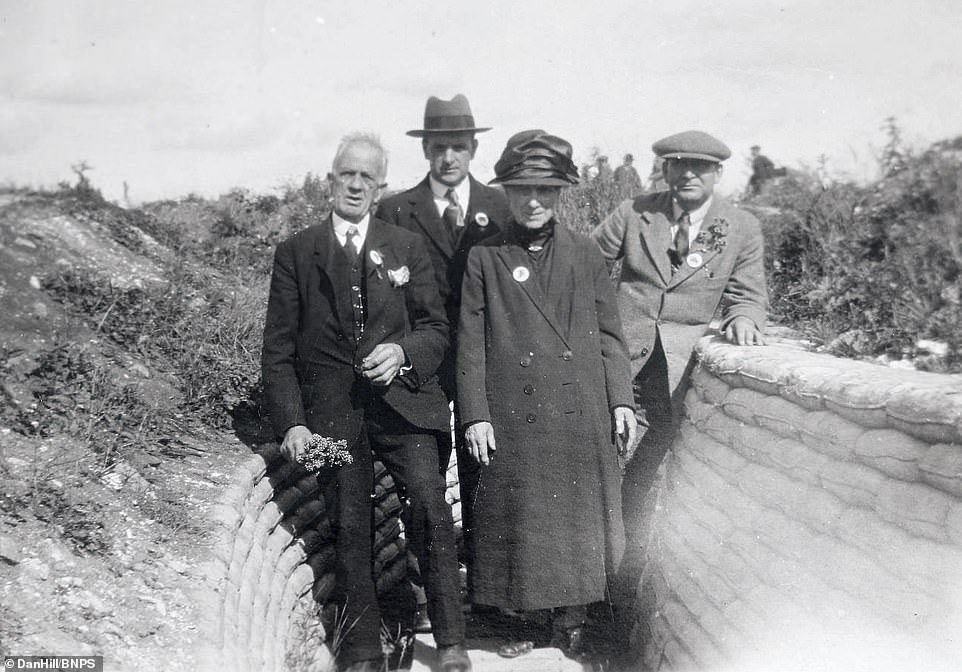 Wanting to experience what their son’s would’ve gone through, the family also visited the frontline trenches at Vimy Ridge, which is where Horace was likely to have fought during the German attack. On May 21 Germany began an offensive that lasted several hours. The bombardment was one of the heaviest of the Great War with 70,000 shells fired in four hours 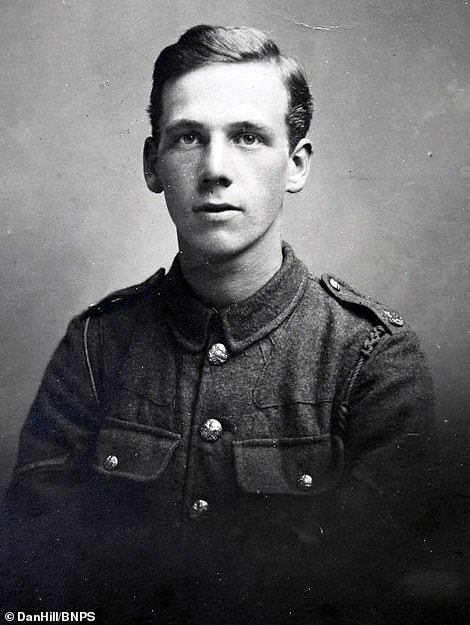 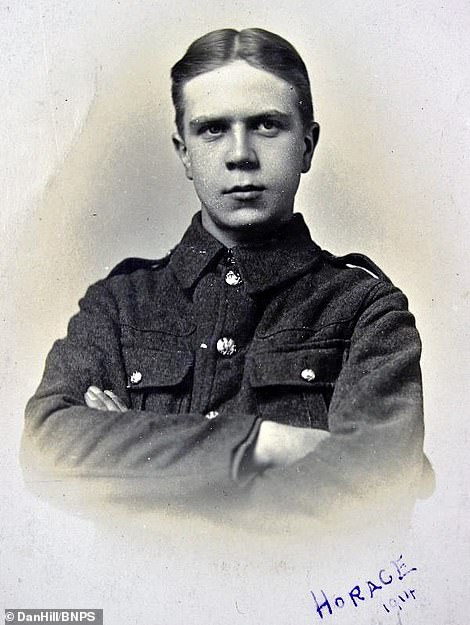 The brothers arrived on the Western Front in 1915 when Harold (left) was aged 19 and Horace was 17. They fought together at Festubert and Loos before Harold was shot in May 1916. The apprentice watchmaker was shot as he helped to repair a comrade’s timepiece in the trenches 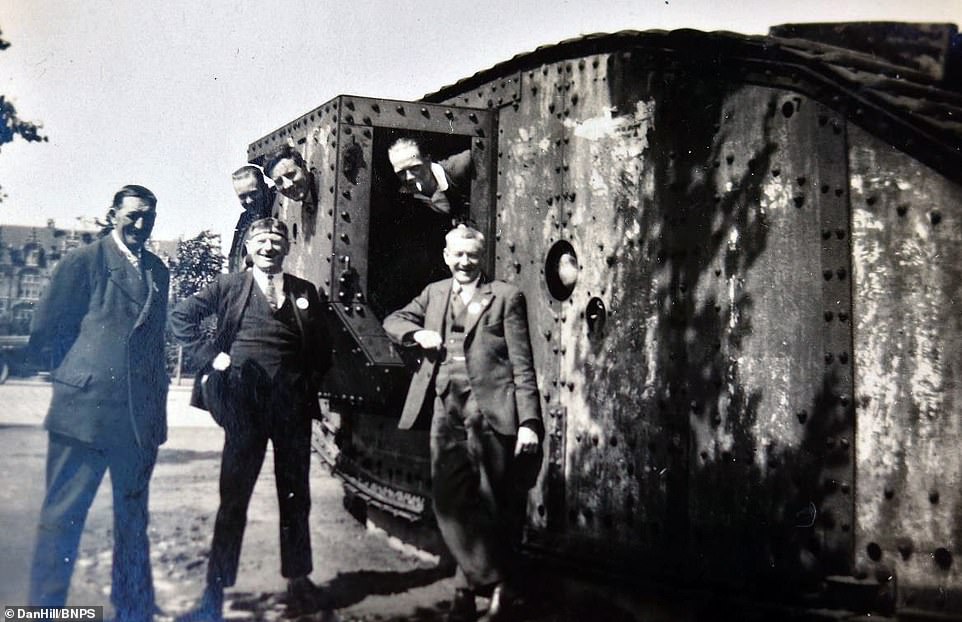 The Hertfordshire Regiment, with Horace pictured top right, posed next to a British tank outside Ypres railway station. The group first fought in the area in 1914 before returning their in 1917. Horace is said to be lucky to have survived as his battalion took many casualties 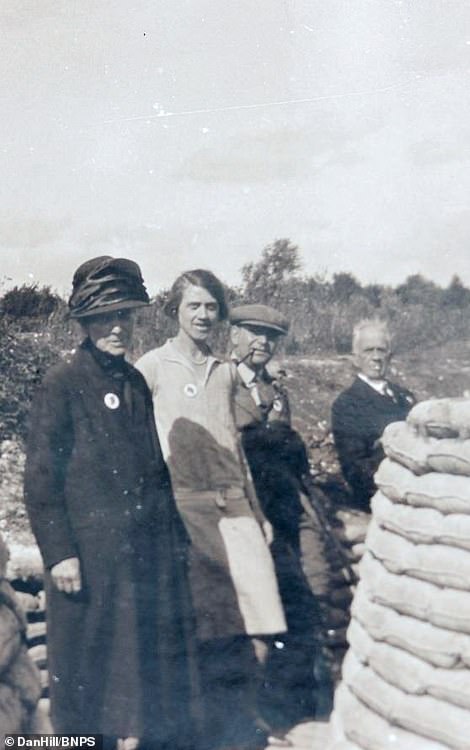 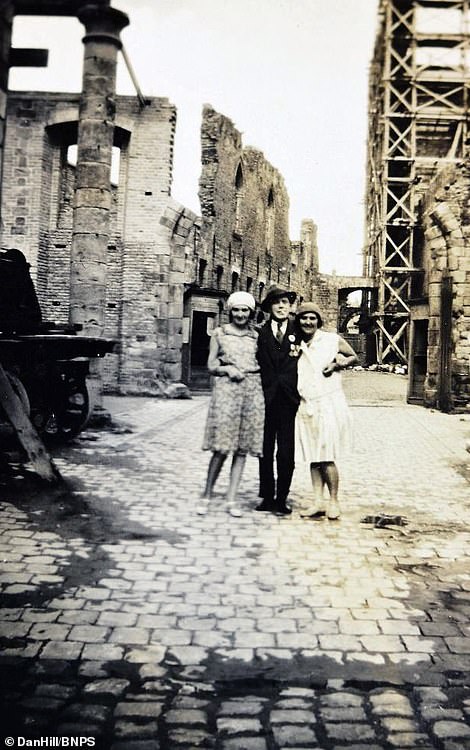 Horace’s mother Jemima (front left), visited the old frontline trenches at Vimy Ridge, where her sons fought, while Horace (right) was captured amidst the Ruins of the Ypres Cloth Hall during their trip. The main market building was destroyed after artillery fire devastated Ypres during the First World War. It lead to the destruction of many unique art works and stood as a symbol of the devastation before being fixed up in the 1930s 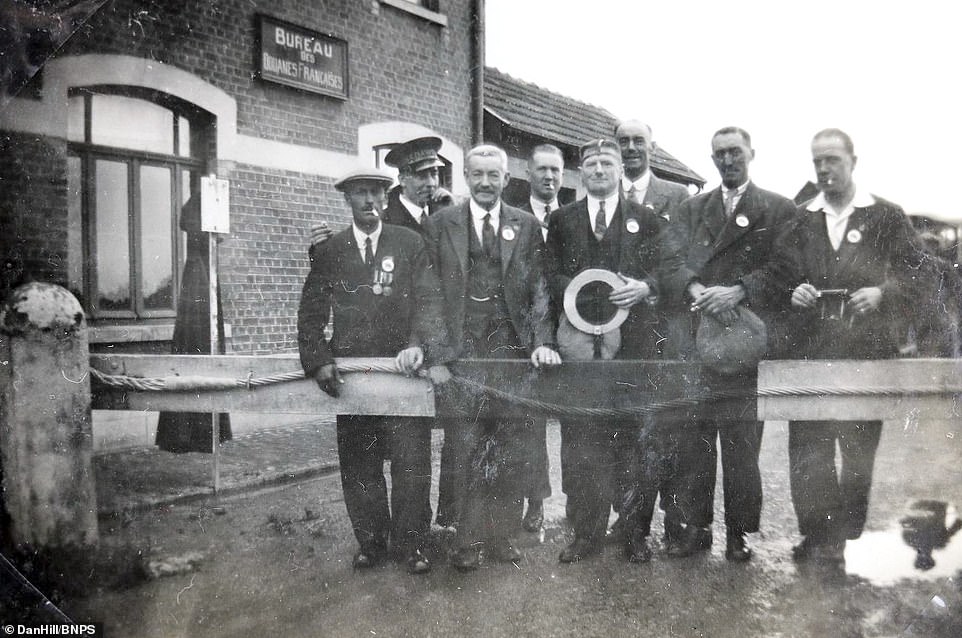 Crossing the boarder once more between France and Belgium, the men of the Hertfordshire Regiment (Horace standing far right) made sure the incredible moment was captured on camera. Most the soldiers hadn’t crossed into the country since returning home in March 1919 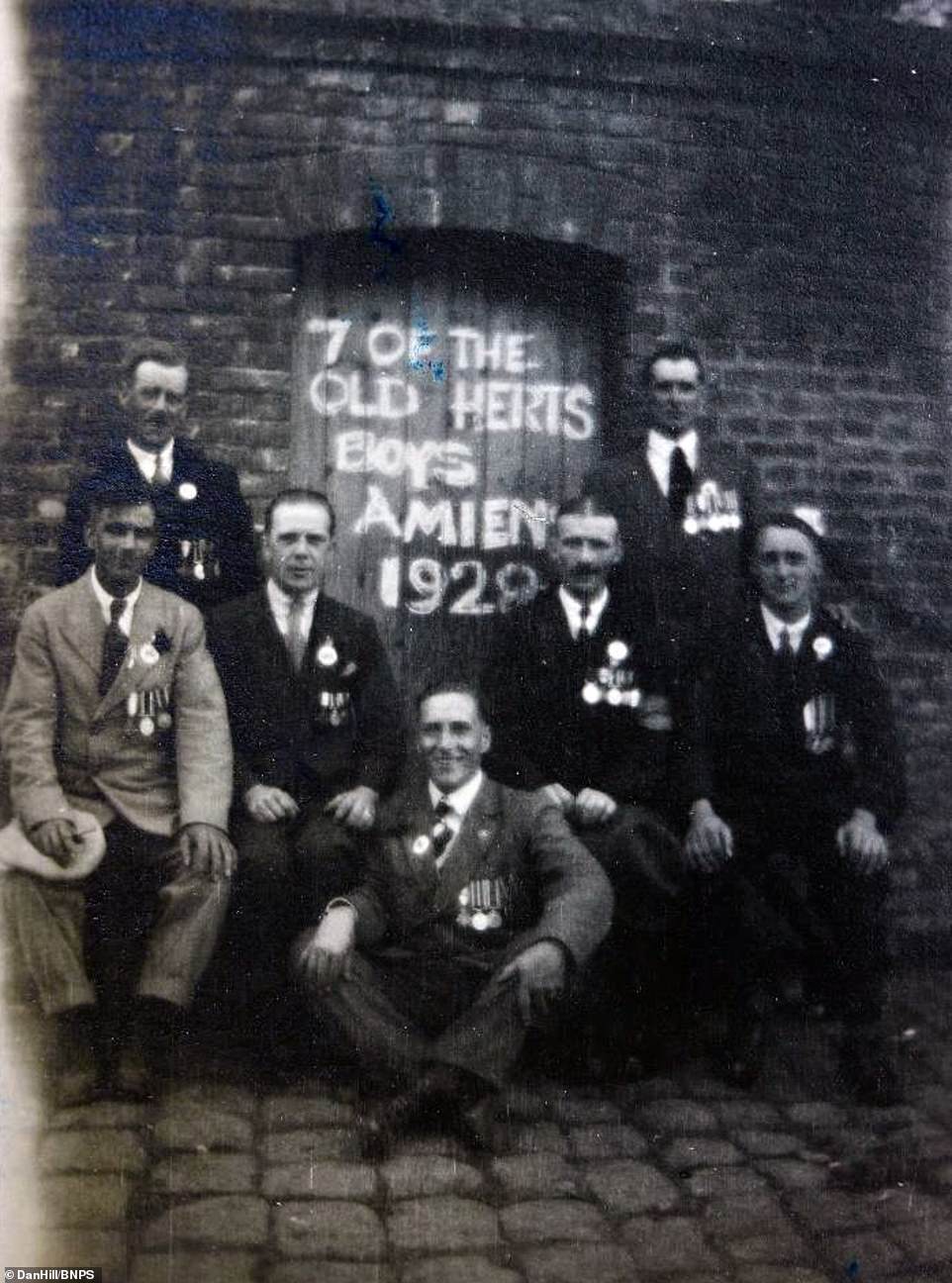 For most, like Horace (pictured third from left) and his Hertfordshire regiment comrades, photographed in Amiens in northern France, this would be the first time they had come back to the Western Front since the First World War battles and were keen to document their return in the places they had visited as soldiers 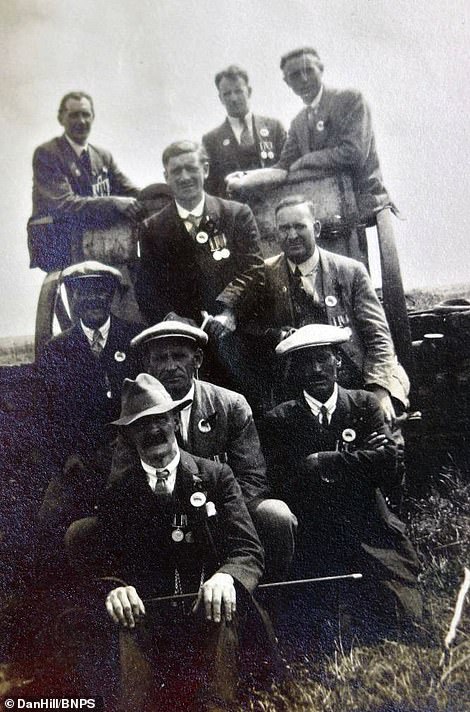 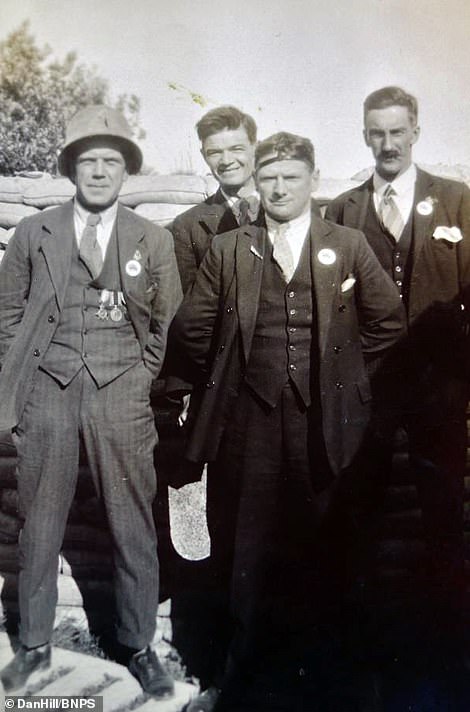 Veterans (pictured left) also visited the ramparts of the Ypres which connected to tunnels, passageways, and rooms – built during the French occupation in the 1680s – that acted as shelters and accommodation, as well as medical dressing stations, for British and French soldiers (pictured right, Horace at Vimy Ridge) 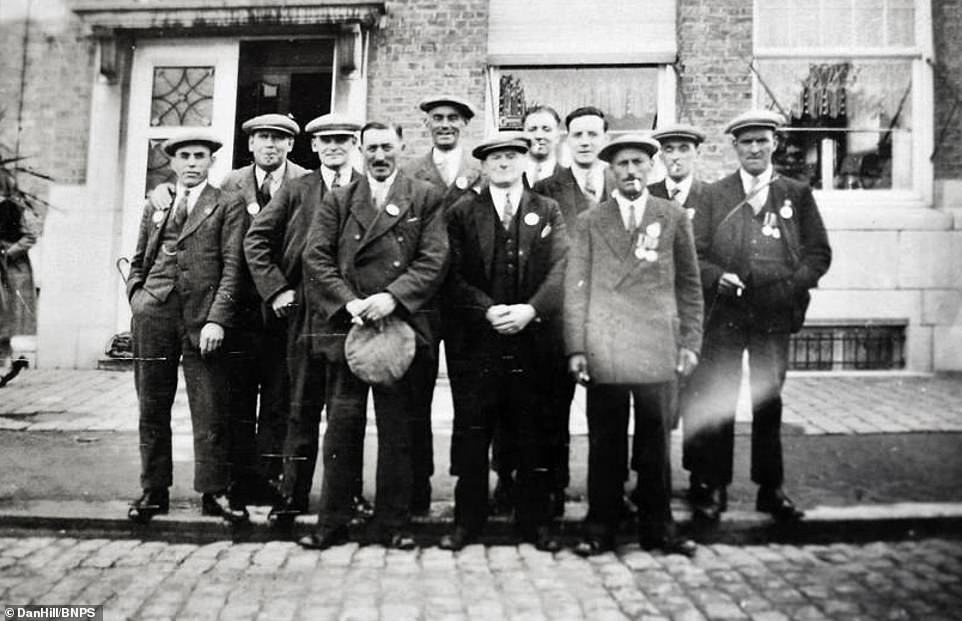 In October 1918, the Herefordshire Regiment were involved in the final battles in the Ypres area. The town signified the end of the war for many, and became an important part of the trip for the men (pictured in Ypres), as they were positioned in the area until the Armistice on 11 November. Many Herefordshire names can be found on the memorial to the missing at Tyne Cot cemetery in the town, with their bravery there winning plaudits from army commanders 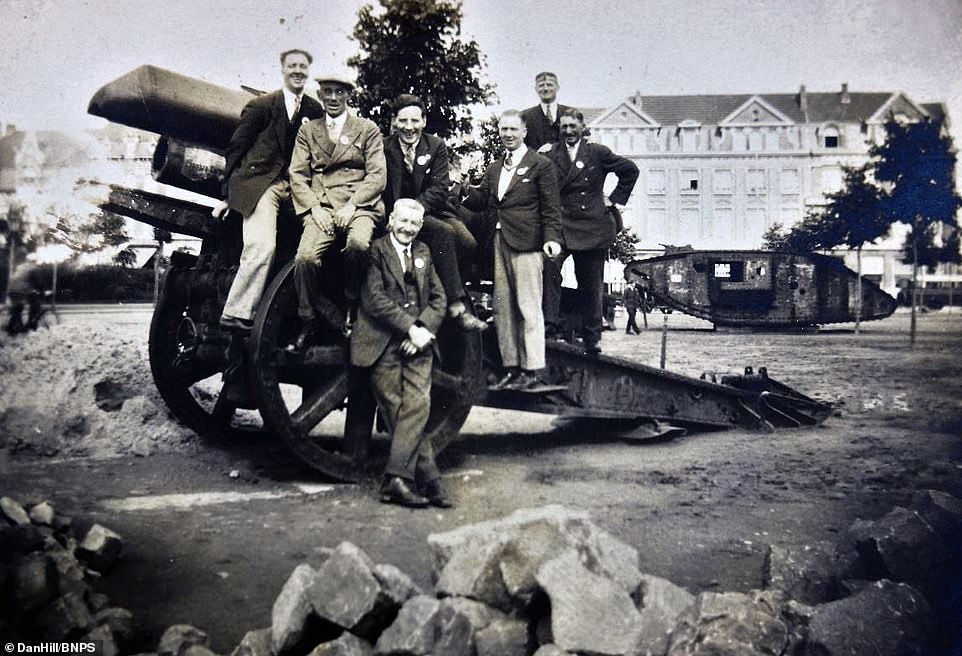 Pictured standing in front of a gun outside the Ypres railway station, the Herefordshire Regiment fought in the Fourth Battle of Ypres. The German’s attacked with the objective of capturing the town and the battle comprised seven phases. But having started in early April, the allies eventually won with the German’s terminating their effort on April 29 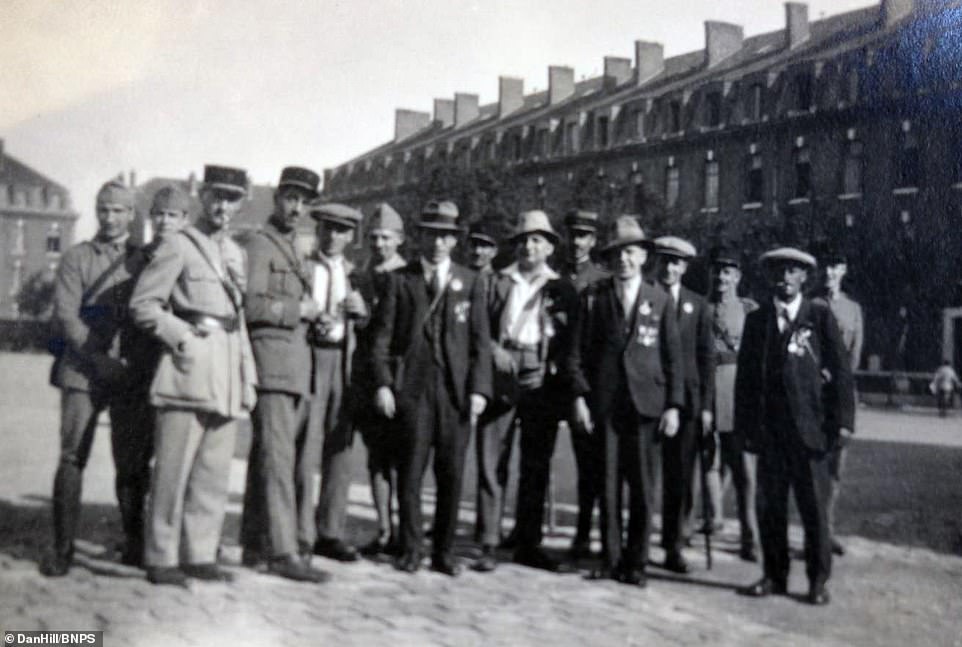 Not only was the trip significant for the British soldiers, but also for French troops who had the chance to once again meet those they had likely fought alongside. Horace and his comrades were sure to capture the iconic moment when they stood side-by-side with the French soldiers in Amiens 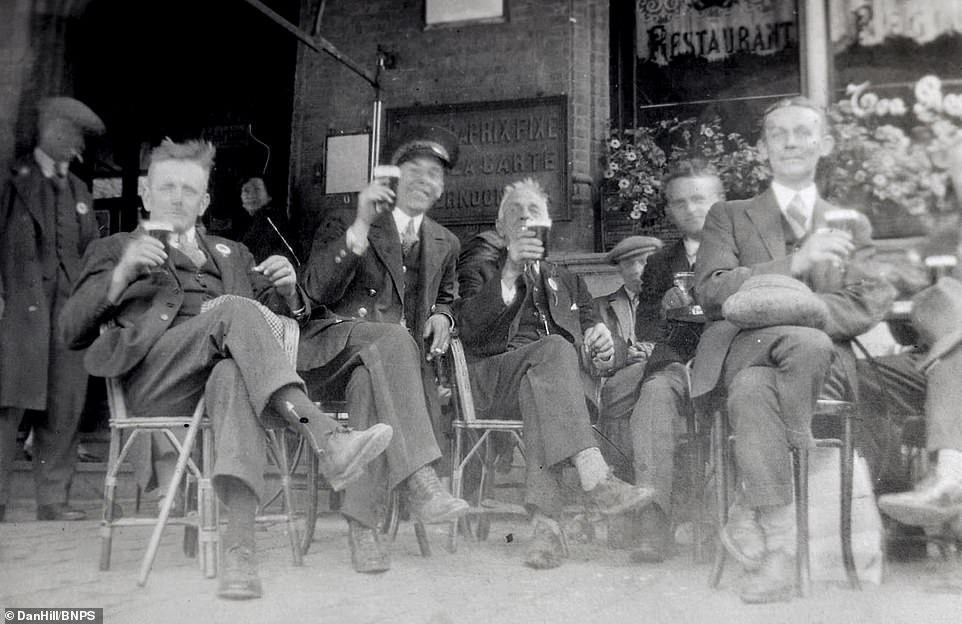 While visiting the monumental areas from the First World War, the veterans and their families also made the most of the occasion to travel. For instance, the brothers’ father was spotted enjoying a beer outside a French cafe in this photograph 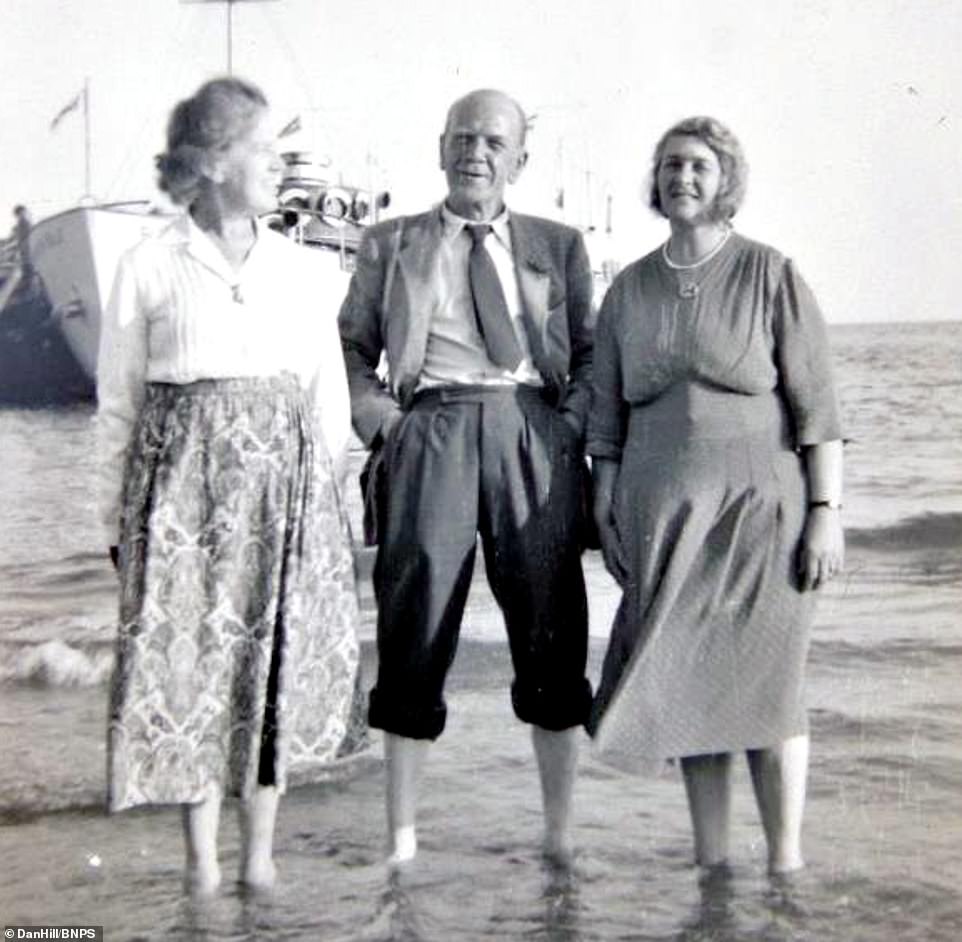 Making the most of the sea and sunshine during their emotional trip, Frank was captured with his trousers rolled up as he enjoyed a paddle in the English Channel with his family before they headed home 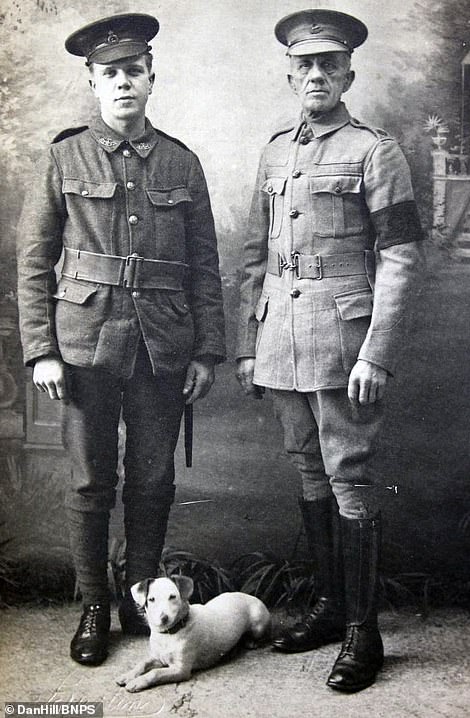 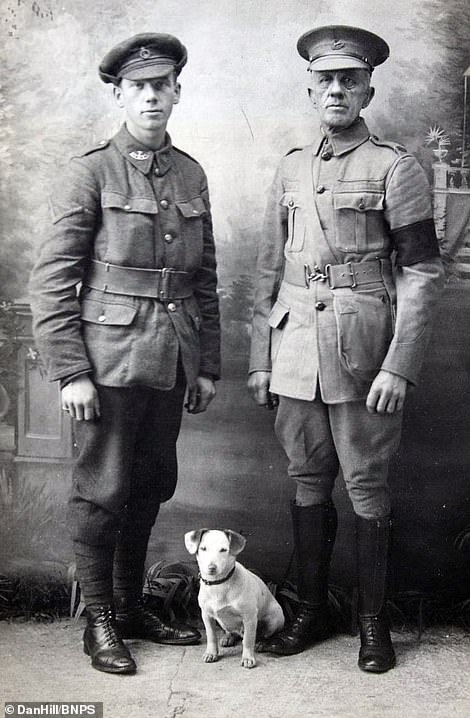 The album contains two moving images of Horace and Harold (pictured) in their army uniform stood next to their father, who is wearing military uniform thought to be a home defence-type for the Herefordshire Rifle Volunteers unit, before they went off to war. Families often ensured they had a family portrait commissioned before leaving for battle in fear that their loved ones might not return 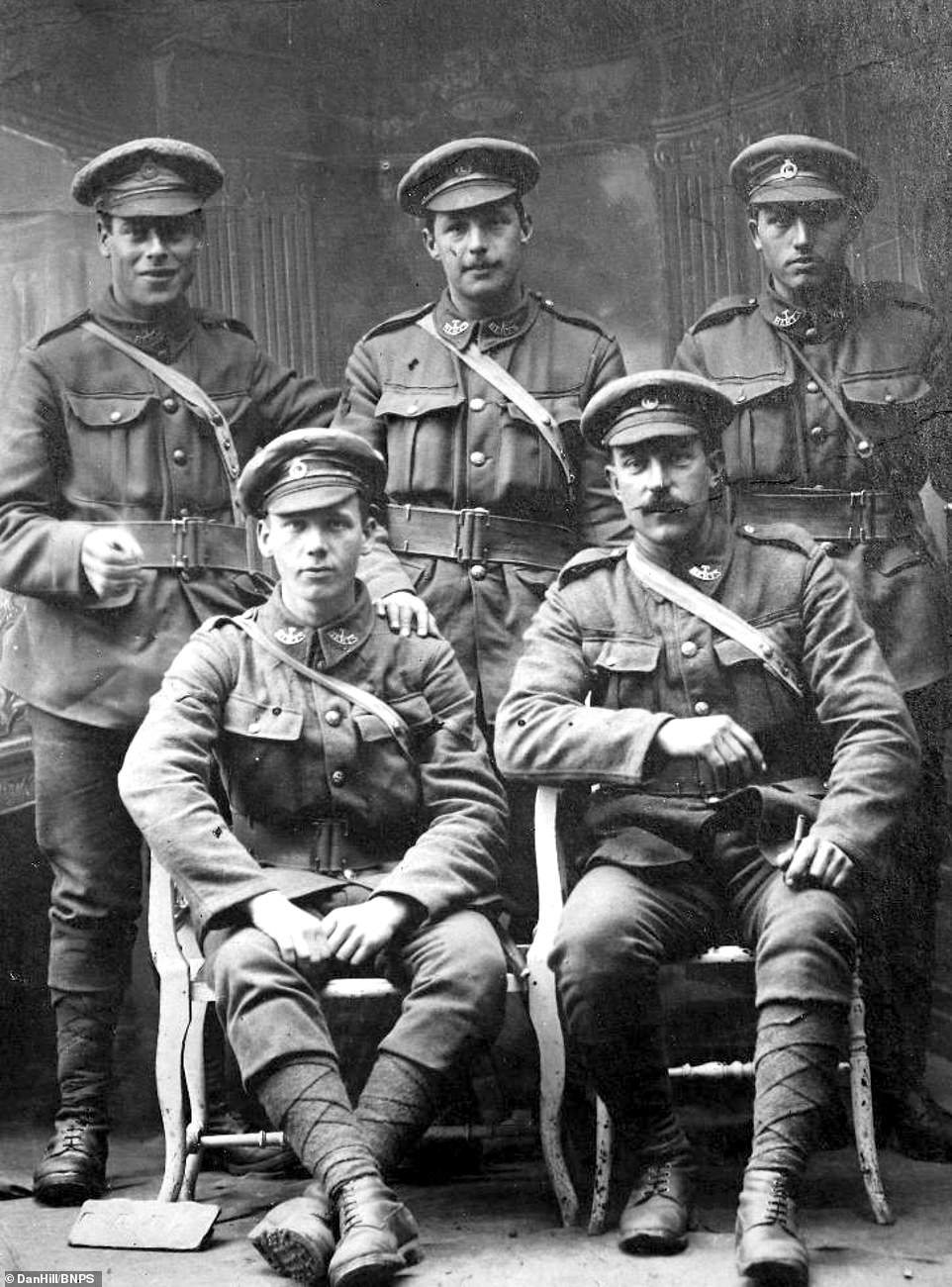 Before his death, Harold is pictured here with his comrades. Harold wasn’t killed in battle, and instead was a victim of ‘trench attrition’. He was shot by a German sniper on the lookout for the slightest enemy movement in the British trenches in Festubert