Incredible photos of Lyndon B. Johnson being sworn in as president and comforting Jackie Kennedy as she stands wearing blood-spattered coat two hours after JFK was assassinated go up for auction

Auctioneers are selling an extraordinary photo album of the moment Lyndon B. Johnson’s was sworn in as president on Air Force One just two hours after JFK was assassinated – with Jackie Kennedy by his side, her jacket still splattered with her husband’s bloodstains.

The 17 images in the album were taken by JFK’s White House photographer, Cecil W. Stoughton, and they begin with LBJ and others waiting in the small 16 sq ft stateroom aboard Air Force One for Jackie to arrive.

Several people are then shown comforting Jackie, finishing with Lady Bird smiling after her husband is inaugurated President.

This iconic photo was the only one that was officially published at first by John F. Kennedy’s White House photographer, Cecil W. Stoughton, who later admitted that the photos made him feel uncomfortable. However, he insisted that he had to take them because he knew he was documenting an import part of history 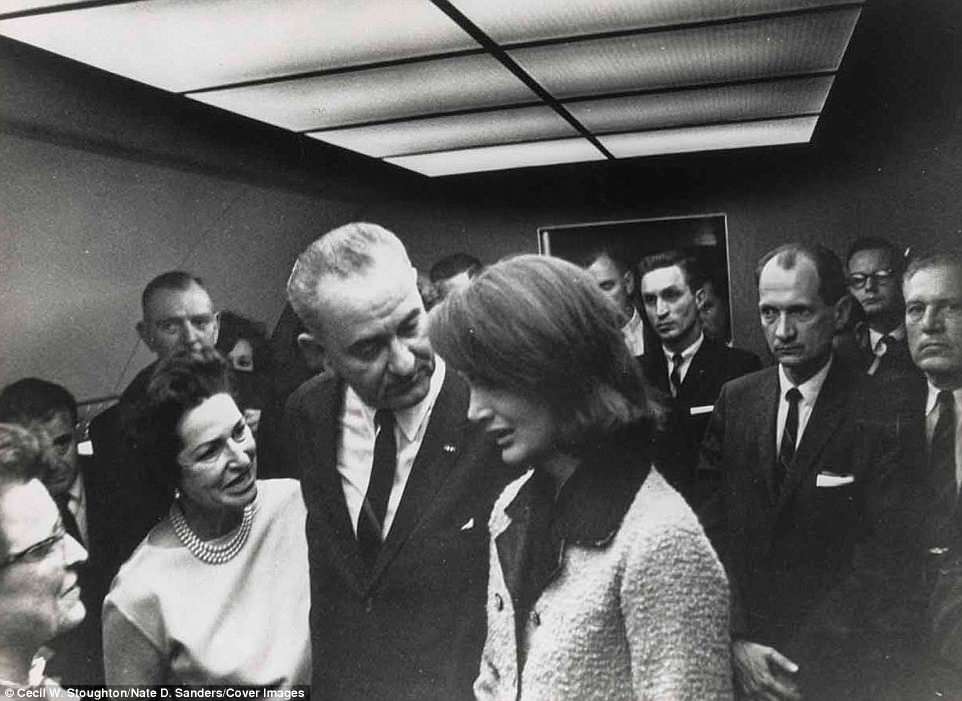 Unsurprisingly, Jackie Kennedy looks absolutely devastated during the inauguration of her husband’s successor. This photo shows the First lady close to tears as new President Johnson and First Lady Bird try and comfort the grief-stricken widow. Officials can also be seen looking on with concern at the scene 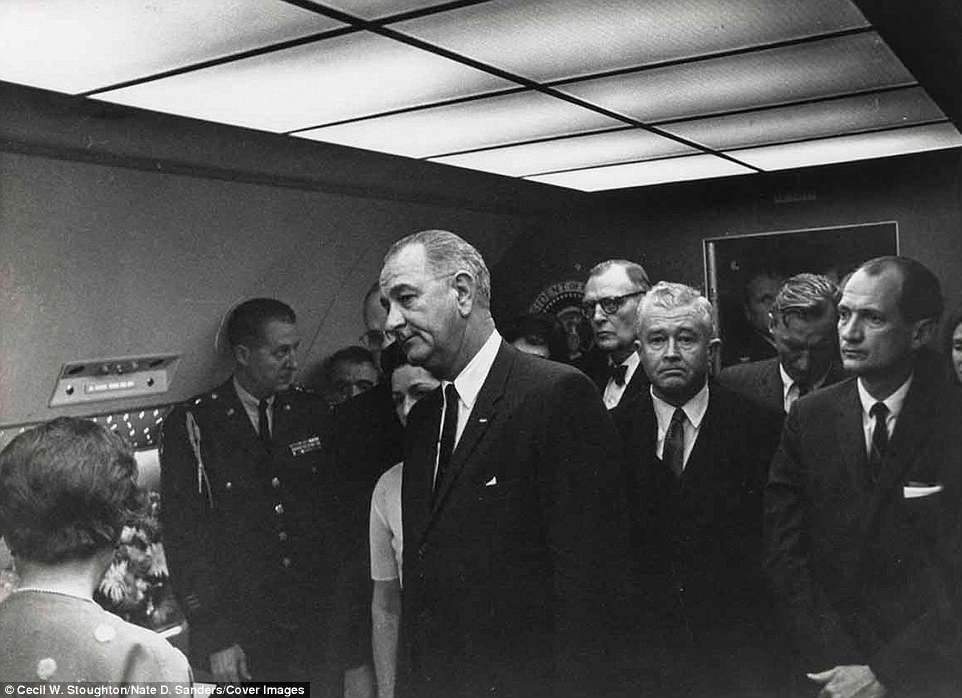 The mood is somber with delegates and officials in the room, including Lyndon B Johnson, still seemingly stunned and upset at the assassination of President Kennedy which took place at 12.30pm, just two hours before the new President’s inauguration ceremony aboard Air Force One

Only one photo of the non-scheduled inauguration was initially published by Stoughton, the iconic shot capturing LBJ with his right hand raised, as a stunned Jackie Kennedy looks on.

These photos, from Stoughton’s personal collection, complete the encounter and reveal a more personal perspective.

There are closer and more emotional shots on the faces of Jackie, LBJ and Lady Bird, as well as the other individuals in the room.

Some of the people look straight into Stoughton’s camera with Lady Bird, in particular, giving a pointed glance to the camera in one of the photos. 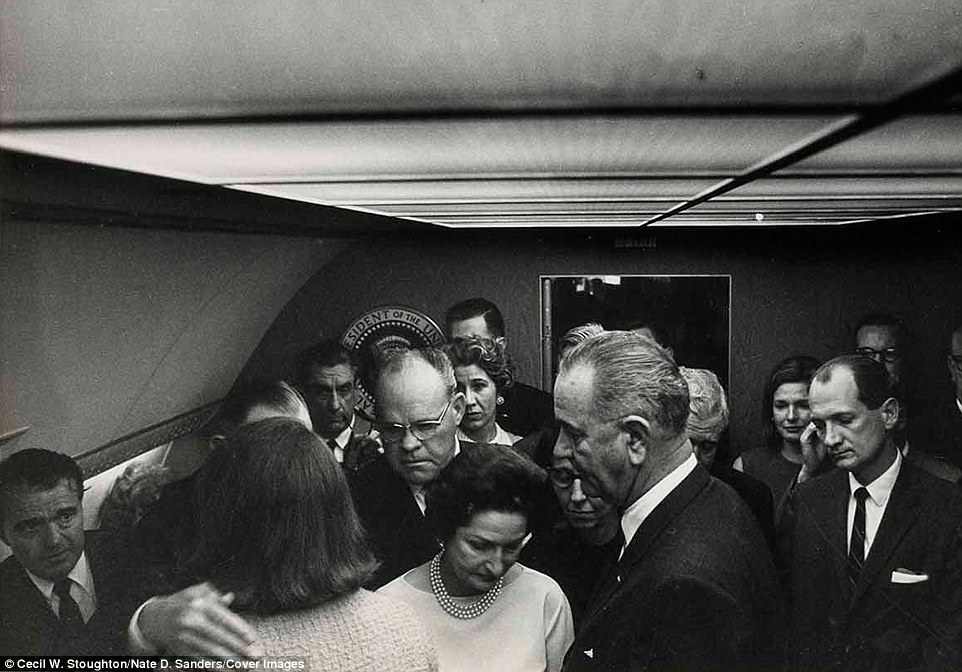 Several people, including Lady Bird Johnson, can be seen comforting Jackie Kennedy following her husband’s death. The people in the stateroom include staff members of the late John F. Kennedy’s team and they seem emotional as they watch Jackie be comforted by the new president 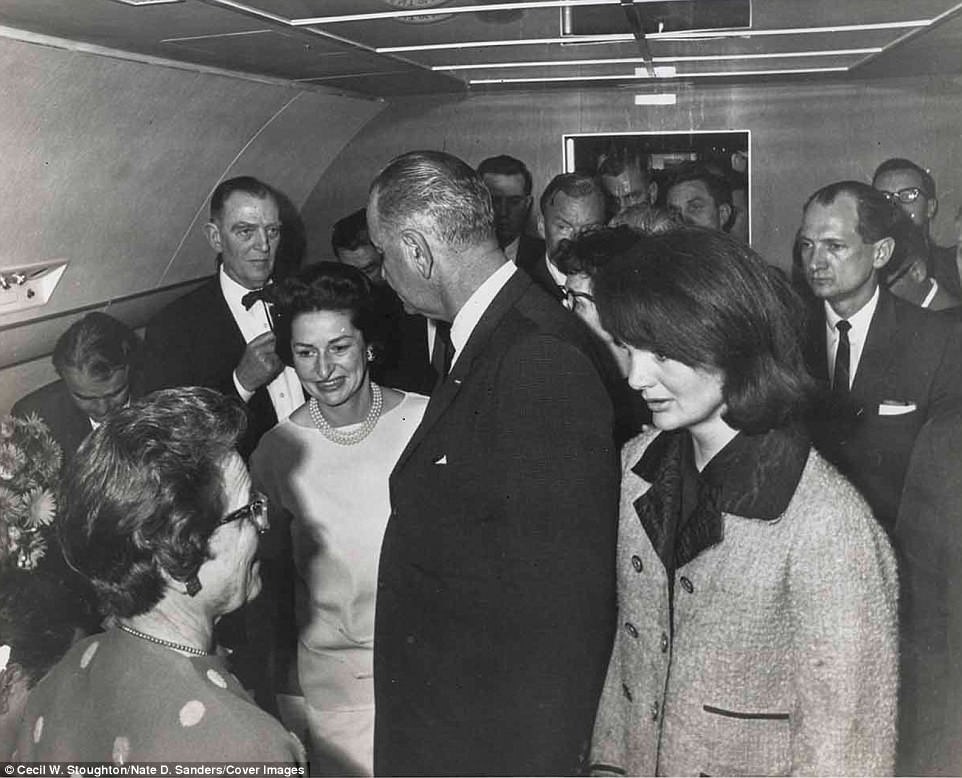 There is a stark contrast between the two First Ladies. Unsurprisingly, Jackie Kennedy looks distraught as she speaks to the judge who, presumably, is offering her condolences. Meanwhile, Lady Bird can be seen smiling as her husband is sworn in as the new President of the United States – although she seems to be trying not to smile too broadly 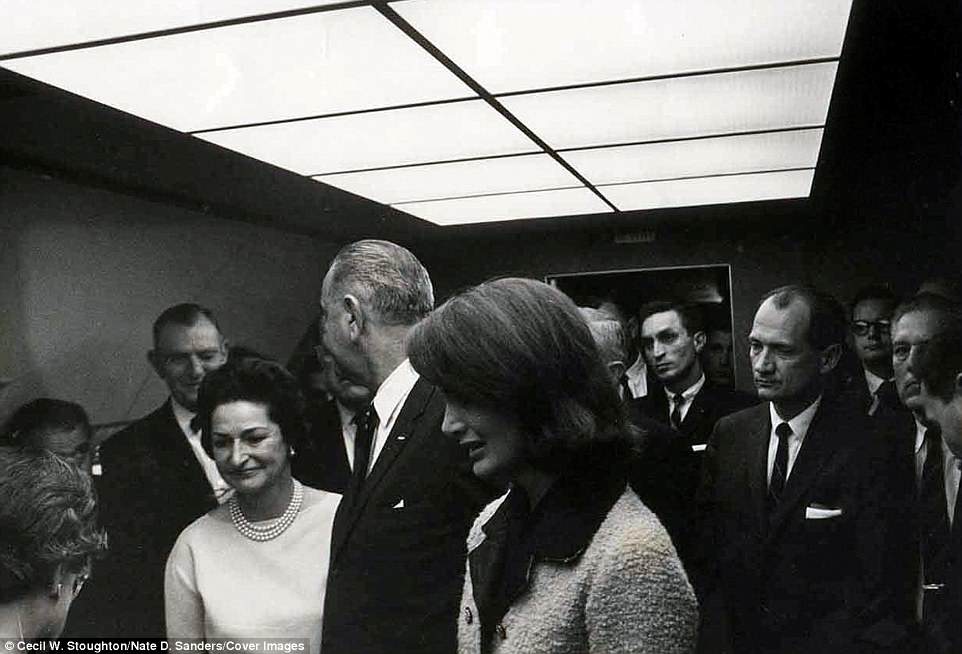 The contrast between the two women is again highlighted in this photo. Following the inauguration, the new President is congratulated but former First Lady Jackie Kennedy is still extremely upset, especially as she is wearing a jacket that still has her husband’s blood stains splattered down one side of it. Lady Bird seems quietly proud on the other hand 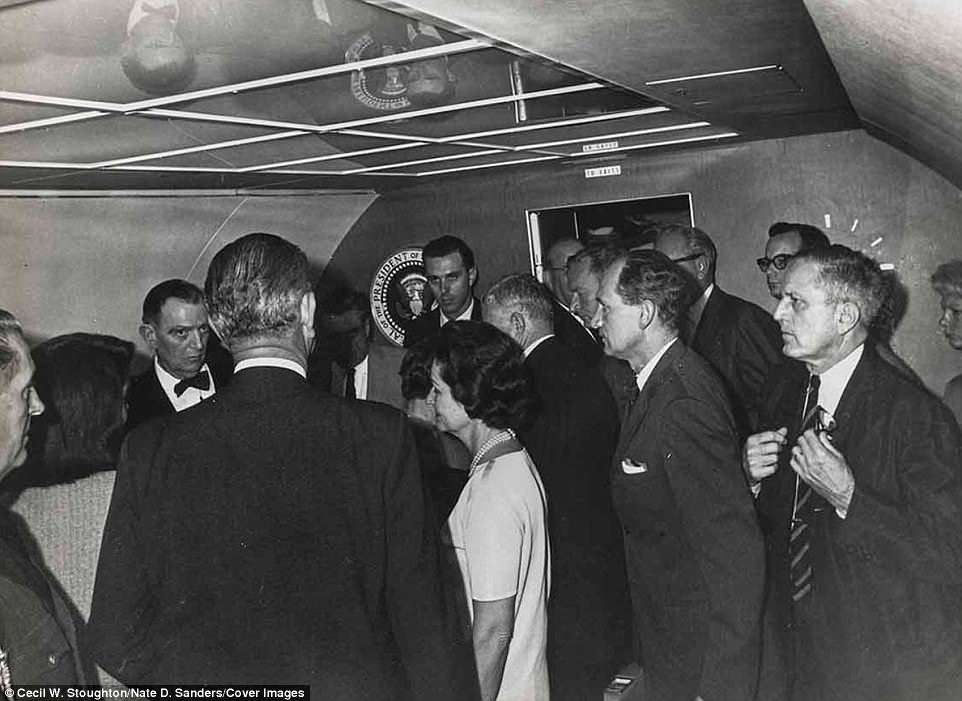 Lady Bird Johnson can be seen smiling tightly as she greets people in the stateroom on Air Force One. The group of officials can be seen awaiting the arrival of Jackie Kennedy, with the First Lady refusing to leave the Dallas Hospital without her husband’s body 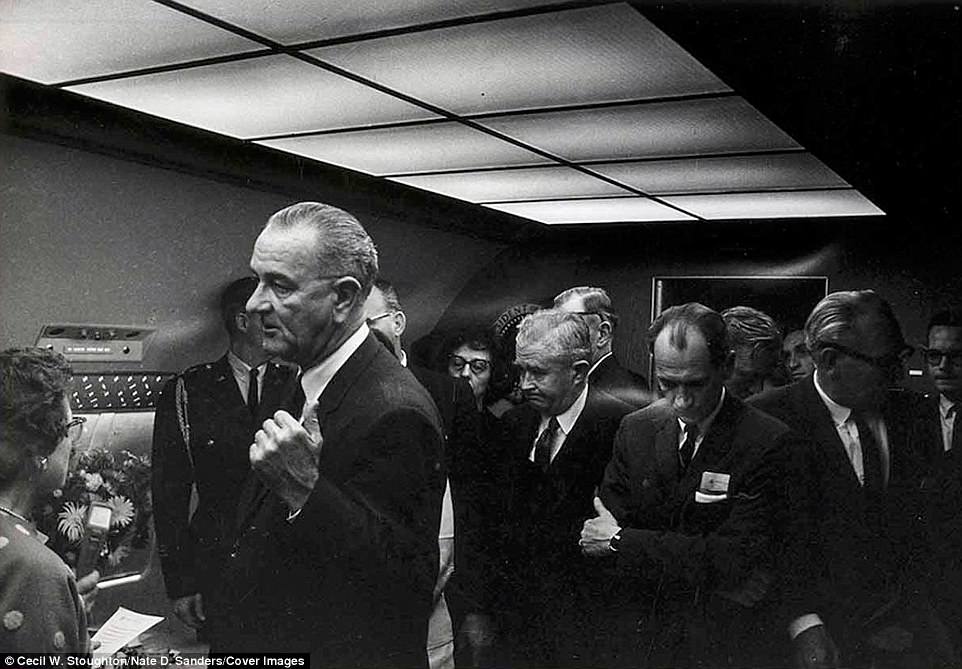 With JFK being assassinated just two hours before the photos were taken, emotions are still running high aboard Air Force One with several people bowing their heads as Lyndon B. Johnson talks with federal district Judge Sarah T. Hughes while they wait for Jackie Kennedy to arrive

Of the event, Stoughton said that while he was uncomfortable taking the photos, he believed he needed to document it as an important record of history.

He also said he positioned Jackie in the photos so that the bloodstains on her coat, which belong to her husband, would not be seen.

At 12:30 pm on November 22, 1963, Kennedy was shot in Dallas while riding with his wife in the presidential motorcade.

Initially, there were fears that Johnson was also shot and both vehicles were rushed to hospital. 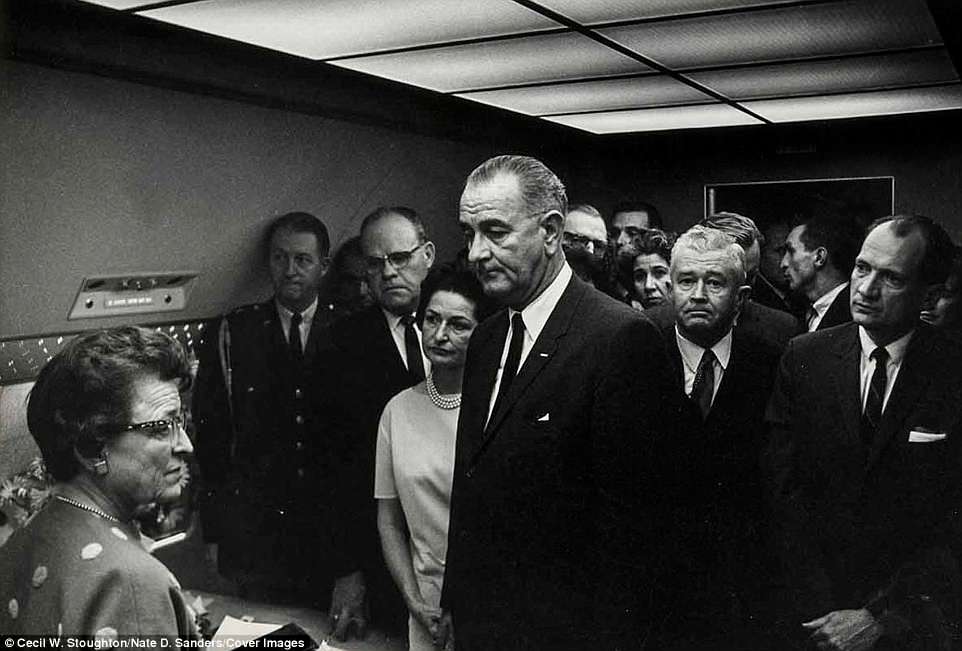 The group of people aboard Air Force One was made up of politicians and police officials and some of the Kennedy’s personal staff and officers. Federal district Judge Sarah T. Hughes was chosen by Lyndon B. Johnson to swear him in, she was a longtime friend and ally of thew new president 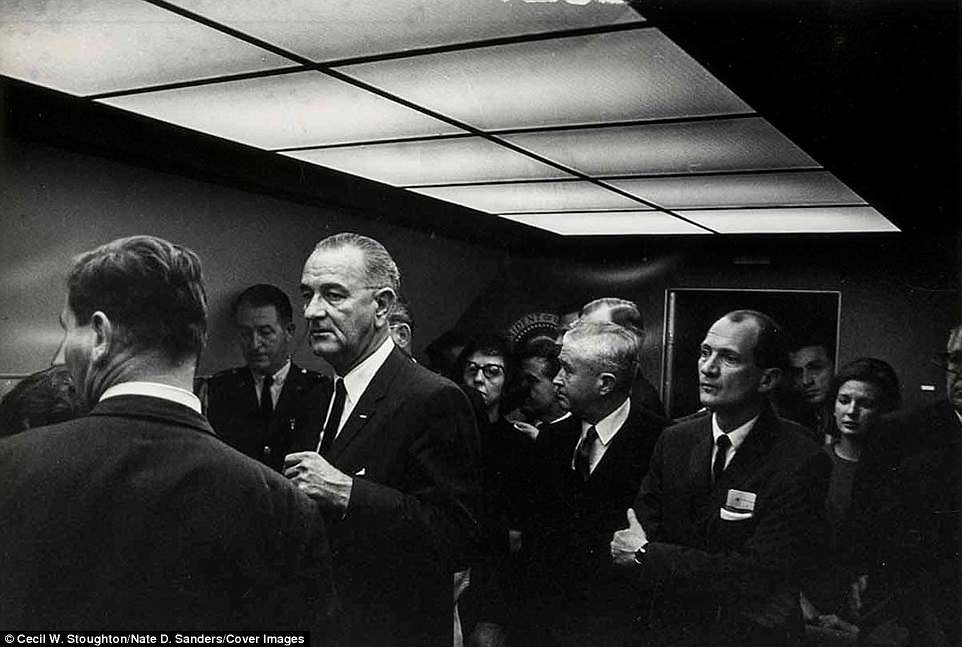 For the inauguration, twenty-seven people reportedly squeezed into the stateroom of Air Force One to witness it. A lack of air conditioning on the aircraft made it even more uncomfortable as the presidential plane was preparing to take-off when the swear-in ceremony took place 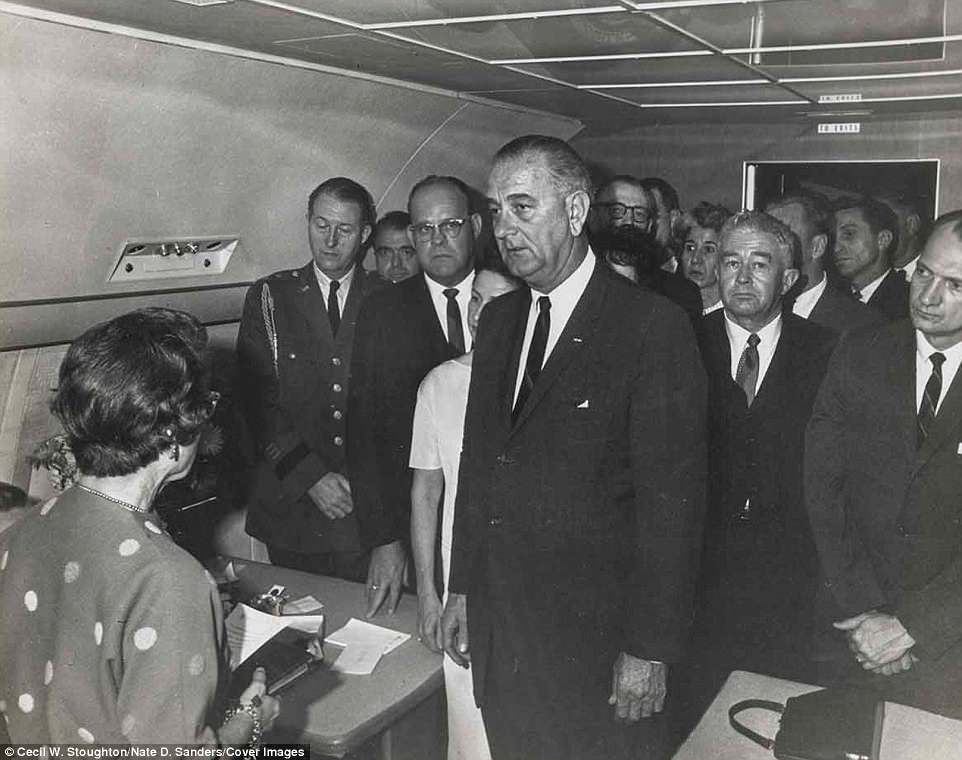 Despite seeming to be in control and composed throughout the ceremony, this photo seems to show the moment Lyndon B. Johnson realises what has happened. The new President looks stunned and startled, as if he is staring into space as the judge speaks and continues the ceremony

Later, Johnson and Jackie Kennedy came aboard Air Force One, as well as a casket which carried JFK’s body.

For the inauguration, twenty-seven people squeezed into the stateroom of Air Force One.

A lack of air conditioning on the aircraft made it even more uncomfortable.

Bidding for the photo album in the sale by Los Angeles-based Nate D. Sanders Auctions starts at $30,000, with the sale ending Thursday May 31. 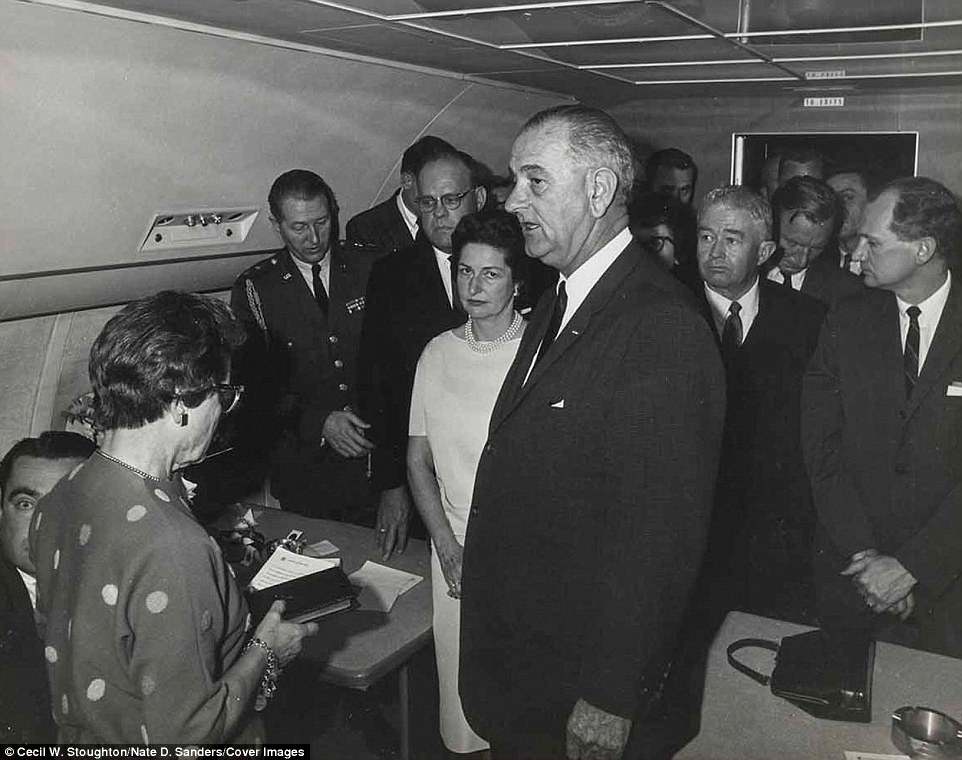 Lady Bird is clearly extremely supportive of her husband and can be seen staring at him as he is led through the swearing in ceremony. The packed room watch on as the judge completes the process but Lady Bird has her eye fixed in the direction of her husband – though she may also be staring into the camera