Six years ago, Disney-owned Marvel hired director James Gunn to direct the first of what it hoped would become a tent-pole movie franchise, Guardians of the Galaxy.

Soon after the news was announced, an old blog of his surfaced that he’d written two years before entitled “The 50 Superheroes You Most Want To Have Sex With”.

In it, Gunn was gratuitously offensive about almost every entrant. 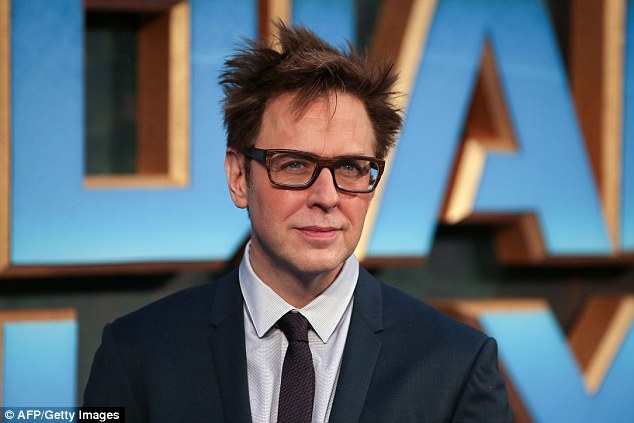 Six years ago, James Gunn was hired to direct Guardians of the Galaxy. Soon after the news was announced, an old blog of his surfaced that he’d written that was gratuitously offensive. Reaction was furious, Gunn apologized and Disney did not fire him

His foul-mouthed commentary, posted on Facebook and Twitter so his social media followers could vote, was revoltingly sexist and homophobic.

It was also singularly inappropriate for anyone now working for Disney, the most family-conscious company in world entertainment.

Reaction to the blog was fast and furious.

The website TheMarySue.Com, which unearthed it, accused Gunn of ‘slut-shaming’ all the female characters and using anti-gay language against many of the male characters.

The shame-faced director made no attempt to defend or excuse his behaviour. He admitted: ‘A couple of years ago, I wrote a blog that was meant to be satirical and funny. In rereading it over the past day, I don’t think it’s funny. The attempted humour does not represent my actual feelings. However, I can see where statements were poorly worded and offensive to many. I’m sorry and I regret making them. I’m learning all the time, and I promise to be more careful with my words in the future. And I will do my best to be funnier as well.’

Instead, they accepted him at his word and allowed him to continue directing Guardians of the Galaxy.

The film was a stunning success, grossing $771 million at the global box office.

Gunn was hired for the sequel, Guardians of the Galaxy 2, and that did even better – grossing $862 million. 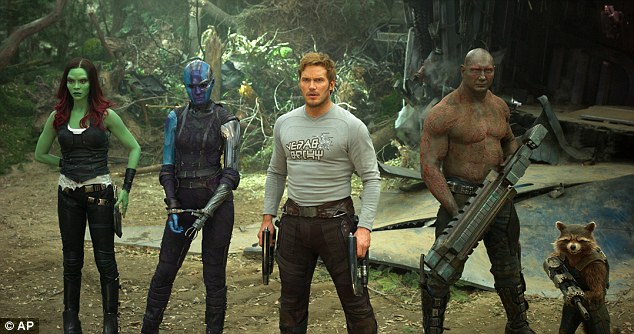 The film was a stunning success, grossing $771 million at the global box office. Gunn was hired for the sequel, Guardians of the Galaxy 2, and that did even better – grossing $862 million. So he was understandable hired to do a third

So understandably Disney then hired him again for an upcoming third movie, Guardians of the Galaxy 3.

Only Gunn won’t now be directing that film, because Disney has now fired him over horribly offensive tweets he posted before he made the first movie.

The posts – found by right-wing political activists who deliberately targeted Gunn over his public anti-Trump stance – included ‘jokes’ about all manner of taboo subjects including rape, AIDS, 9/11 the Holocaust and pedophilia.

‘The offensive attitudes and statements discovered on James’ Twitter feed are indefensible and inconsistent with our values and we have severed our business relationship with him,’ said Alan Horn, chairman of Walt Disney Studios.

I agree with them. I didn’t find any of them funny. In fact, I found most of them absolutely disgusting.

But it’s clear that Gunn was trying to be funny, not serious. 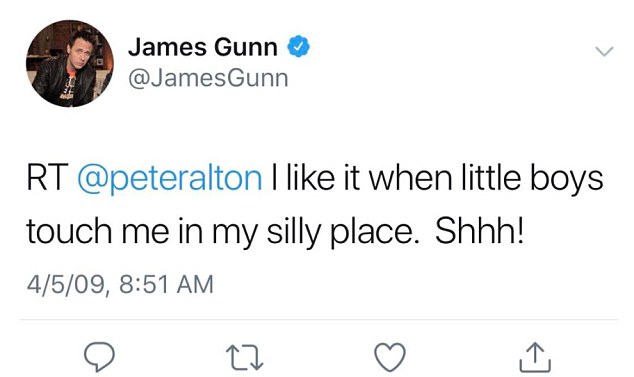 I don’t find any of the dozens of offensive, pre-2012 tweets humorous, in fact they are absolutely disgusting. But it’s clear that Gunn was trying to be funny, not serious, and he tweeted it all before he worked at Disney

It’s also clear that Gunn made none of these jokes AFTER starting work with Disney, or AFTER the scandal that erupted over his 2011 blog.

So Disney knew when they hired Gunn that he had posted highly inappropriate and offensive things before they gave him his contract.

It would have taken them just a few minutes to track down every tweet he’d ever posted to see if the guy they were hiring suited their ‘values’.

But Disney didn’t do that.

They accepted his statement of sincere regret over past humour and his assertion that he’d now evolved as a human being and would make similar jokes again.

And here’s where I have a big problem with Disney’s decision to now fire him.

For six years, James Gunn has lived up to the public promises he made in 2012.

He has proven that he HAS changed as a human being.

As he said in his own statement after being fired: ‘Many people who have followed my career know when I started, I viewed myself as a provocateur, making movies and telling jokes that were outrageous and taboo. As I’ve discussed publicly many times, as I’ve developed as a person, so has my work and my humour. I am very, very different than I was a few years ago. I try to root my work in love and connection and less in anger. My days of saying something just because it’s shocking and trying to get a reaction are over. I used to make a lot of offensive jokes. I don’t any more. I don’t blame my past self for this, but I like myself more and feel like a more full human being and creator today.’

He apologized and has, since 2012, shown he’s changed for the better. Where is his second chance?

Fine words, and ones backed by his actions.

So why has he been fired?

Isn’t the whole point of America that it’s a country where people get a second chance in life? A place where you can atone for past sins and become a better person?

President George W. Bush once said: ‘America is the land of the second chance – and when the gates of the prison open, the path should lead to a better life.’

James Gunn never faced a criminal trial for his deplorable tweets because he broke no law.

Instead, he faced what has become a far less forgiving court – the one of public opinion, where he must never be allowed to move on from offensive things he said years ago.

The problem with Trial by Twitter is that the verdicts are so inconsistent.

Roseanne Barr saw her whole career go up in smoke when ABC fired her two months ago over a racist tweet.

Last week, I lambasted Daily Show host Trevor Noah – who led the outrage over Barr – over appallingly racist and sexist comments he made about Aboriginal woman a few years ago.

To those on the receiving end, the ‘jokes’ would have been just as offensive and degrading as anything Barr or Gunn said.

But unlike Barr and Gunn, Noah has steadfastly refused to apologise. 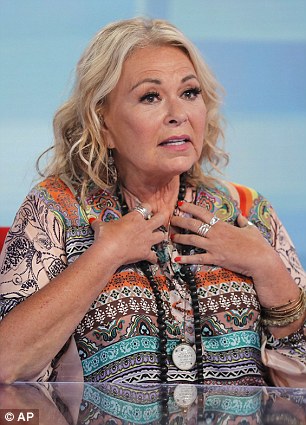 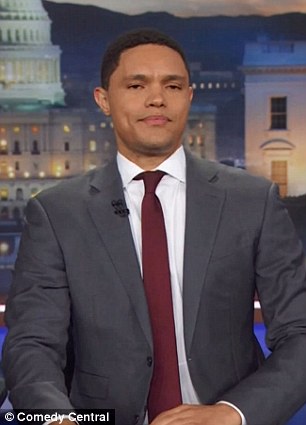 Trial by Twitter is that the verdicts are so inconsistent. Roseanne Barr saw her whole career go up in smoke when ABC fired her two months ago over a racist tweet. Trevor Noah hasn’t even been forced to say sorry for disgusting jokes he made about Aboriginal women

And also unlike Barr Gunn, his employers Viacom – who own Comedy Central – have not even forced him to say sorry, let alone fire him.

I don’t think Noah should be fired, but I do think he should apologise to the Aboriginal women he so disgracefully abused.

As for Gunn, I don’t understand why he’s been fired.

And nor do his Guardians of the Galaxy co-workers.

Today, the cast, including Chris Pratt and Zoe Saldana, released a letter fiercely supporting Gunn and suggesting Disney re-hire him.

They made it clear they were ‘not here to defend his jokes of many years ago’. 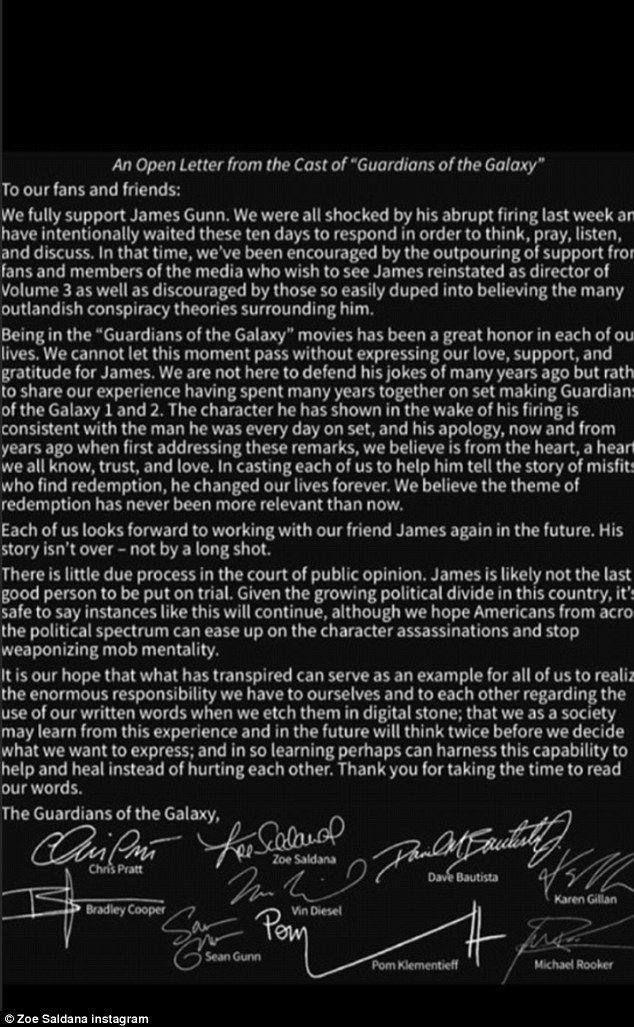 I don’t understand why he’s been fired  nor do his Guardians of the Galaxy co-workers. Today, the cast, including Chris Pratt and Zoe Saldana, released a letter fiercely supporting Gunn and suggesting Disney re-hire him

But they added: ‘His apology, now and from years ago when first addressing these remarks, we believe is from the heart, a heart we all know, trust and love. There is little due process in the court of public opinion.’

Disney has behaved like gutless cowards, bowing to the howling Twitter mob in a pathetically supine way.

All they had to say was this: ‘When we first hired him in 2012, James made a full apology for inappropriate and offensive old tweets. His actions since show he was sincere in that apology.’

Instead, Disney made it clear there can be no second chances in America any more, no possibility of redemption or being rewarded for becoming a better person.

Of course, Disney will shamelessly continue to make billions of dollars making movies like Guardians of the Galaxy that tell a complete opposite story. Half their films are about people getting a second chance in life.

As the cast letter said: ‘In casting each of us to help him tell the story of misfits who find redemption, he (Gunn) changed our lives forever. We believe the theme of redemption has never been more relevant than now.’

Stop behaving like a mouse, Disney, and re-employ James Gunn.

Even Mickey would be ashamed of your cowardice.