Pilot and two passengers are rushed to hospital as aircraft crashes on runway: Airport is closed and flights diverted

A pilot and two passengers have been rushed to hospital after an aircraft crashed on the runway at an airport in Teeside this morning.

Teeside International Airport is closed after the incident this morning at 9.39am and the injured three were taken to James Cook University Hospital in Middlesborough.

Witnesses said the planes engine began to ‘sputter’ shortly after take off and sounded like it cut out before landing back on the runway and veering off to the left.

One of the people onboard had to be airlifted to the hospital while the other two were also taken for treatment. One passenger suffered ‘serious injuries’ according to the ambulance service.

Investigations are underway and the airport said it will remain closed ‘until further notice’. At least four flights have been diverted to Newcastle Airport. 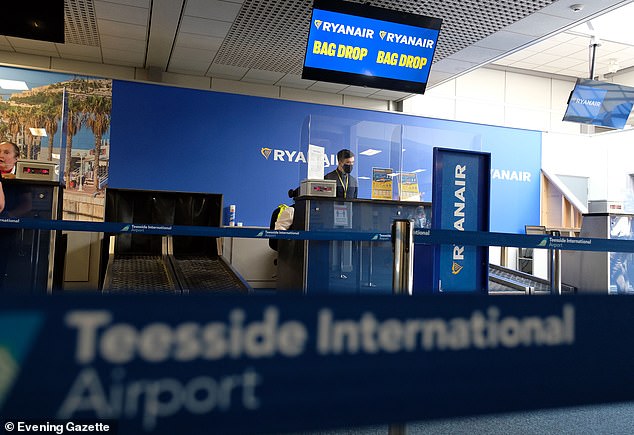 A pilot and two passengers have been rushed to hospital after an aircraft crashed on the runway at Teesside International Airport at 9.39am this morning

A witness told TeessideLive: ‘I heard the plane engine start to sputter, then looked up to see it bank left sharply.

‘The engine sounded like it was really struggling, then it just seemed to cut out.

‘It looked like the pilot managed to keep the plane fairly level as it started to come down, but then it just dropped rapidly, then I heard a thud behind the tree line.

‘Thankfully there was no explosion or fire. I phoned the emergency services immediately, and the air ambulance arrived about 20 to 30 minutes later.

‘I just hope those onboard are okay.’

Teesside International Airport said: ‘We can confirm an incident occurred today involving a light aircraft at 9.39am.

‘A pilot and two passengers were onboard and have been taken to hospital.

‘Our runway will remain closed until further notice while a thorough investigation is carried out.

‘We would like to thank the emergency services, on site staff for their quick response.’

Durham Police confirmed it is investigating the ‘incident’ and the runway will remain closed until officers have finished.

It said: ‘Officers are currently on scene at Teesside International Airport following an incident involving a light aircraft.

‘The runway is currently closed while an investigation is carried out.’

Great North Air Ambulance Service said it airlifted one patient to the hospital after arriving within 10 minutes.

A spokesperson told the Northern Echo: ‘We have attended an incident at Teesside Airport this morning. We were on the scene within 10 minutes of being alerted.

‘We airlifted one patient to hospital.’

The ambulance service added: ‘We had a doctor and paramedic on board, and we got to the scene quickly from our base in Eaglescliffe.’