Pilot, 27, ‘gets sucked out of a cockpit window at 32,000ft’ after windshield shattered on a 119-passenger plane

A Chinese co-pilot is recovering in hospital after apparently being sucked out a cockpit window and had half of his body dangling out of the plane at 32,000ft high.

Xu Ruichen, 27, was saved by his seat belt after the windshield in front of him suddenly broke and fell off the Sichuan Airlines plane carrying 119 passengers, said the captain of the flight to Chinese media.

Despite the fact that the cockpit’s temperature suddenly dropped to minus 40 degree Celsius, captain Liu Chuanjian safely landed the Airbus A319 after the mid-air emergency over south-western China yesterday morning. 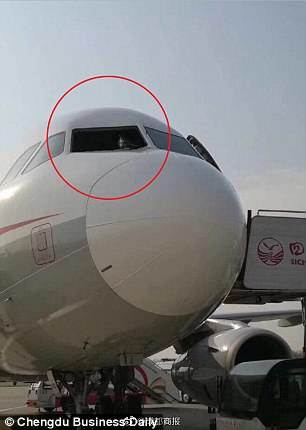 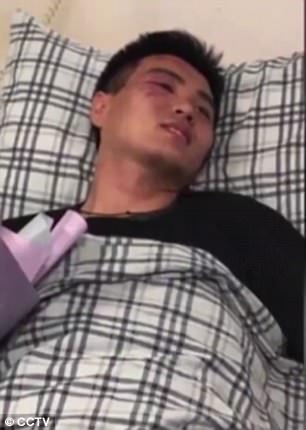 Chinese pilot Xu Ruichen (right) is recovering in hospital after apparently being sucked out of a cockpit window. A windshield on the Sichuan Airlines aircraft (left) suddenly broke mid-air 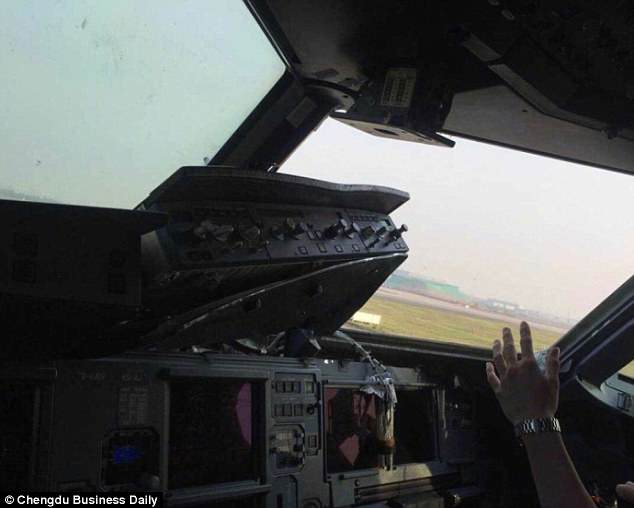 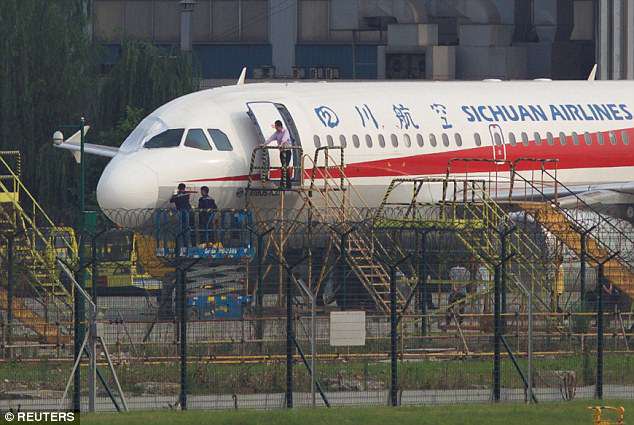 The co-pilot Xu reportedly suffered scratches on the face and the chest and is currently hospitalised in Chengdu, according to state broadcaster Central China Television Station.

During a press conference, the captain thanked his flight crew for helping him deal with the emergency calmly and successfully.

All passengers were reported to be safe.

The Sichuan Airlines plane, 3U8633, was scheduled to fly from Chongqing to Lhasa. It departed Chongqing at 6:27am and was due to arrive in Lhasa at 9:27:am.

One of the plane’s windshields reportedly shattered about one hour into the flight when the Airbus A319 was flying over the city of Chengdu. 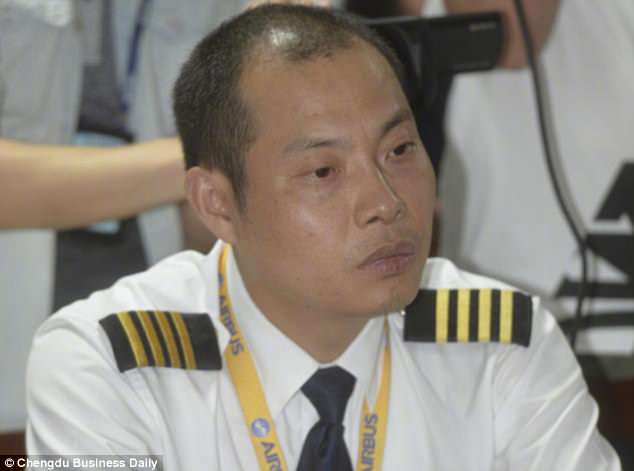 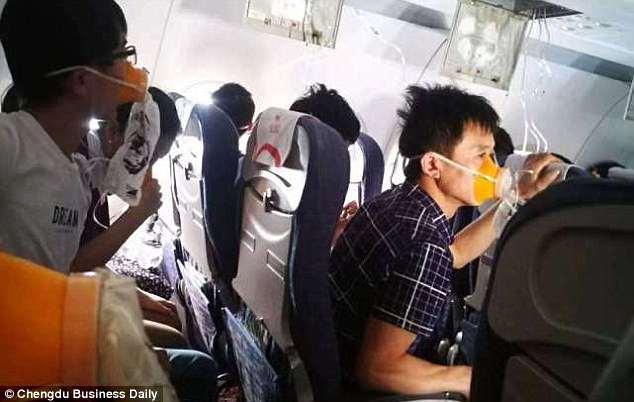 The captain claimed he had 25 years of experience and had flown the route more than 100 times.

He told Chengdu Business Daily there were no warning sign when one of the windshields on the right-hand side of the cockpit shattered.

‘I couldn’t hear the radio and the cockpit’s temperature dropped to minus 40 degree Celsius,’ he said.

The co-pilot had his upper body ‘sucked out’ of the broken windshield despite having a safety belt strapped on, stated the captain.

One female passenger also suffered minor injuries on the waist. They were both taken to Chengdu No.1 People’s Hospital after the landing.

A recent airplane maintenance report released by Xinhua News Agency showed there were no signs of tear and wear on the windshields.

It also confirmed the airline company had never changed or altered any windshields on the plane.

According to an earlier report by Xinhua, the captain issued an ‘Squawk 7700’ emergency code after the window shattered, alerting the air traffic control facilities of the dangerous situation.

The plane was diverted to nearby Shuangliu International Airport in Chengdu. Within in 20 minutes at around 7:46am, the captain safely landed the plane at the airport.

Zeng Jun, one of the passengers, told Chengdu Business Daily: ‘The plane suddenly descended after flying about an hour in the air. It lasted for about five, six seconds.

‘There were people screaming, bags dropping from the overhead cabin and lunch boxes scattering along the corridor.’ 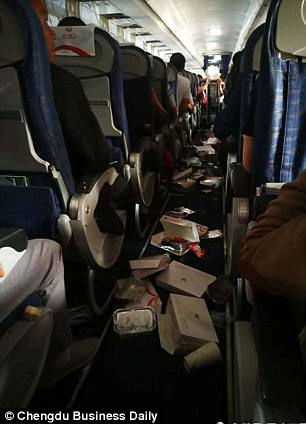 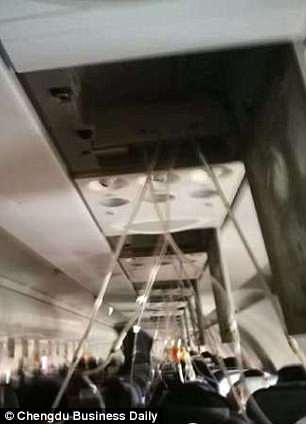 One passenger said the plane suddenly descended causing luggage and lunch boxes to drop to the floor (right). Passengers were told to fasten their seat belts and wear oxygen masks (left) 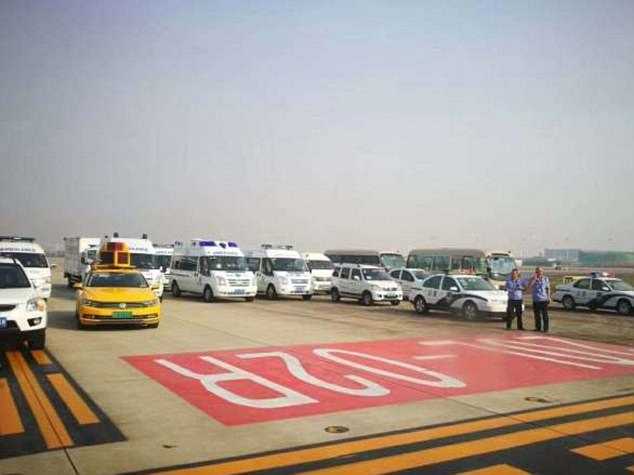 Reports from yesterday also said 27 flight passengers claimed to be unwell after the incident and had to be hospitalised.

Most of the passengers were discharged shortly after.

A total of 59 passengers were told to take another flight at 11:50am to fly to Lhasa Gonggar Airport while the remaining travellers sought alternative transport, such as high-speed train.

In a statement issued today on its social media account, Sichuan Airlines apologised to the passengers on board for the inconvenience the incident had brought them.

The statement also said all flight crew were in stable condition. 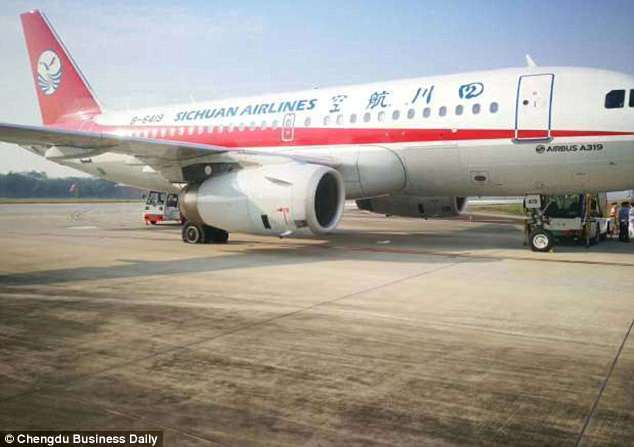 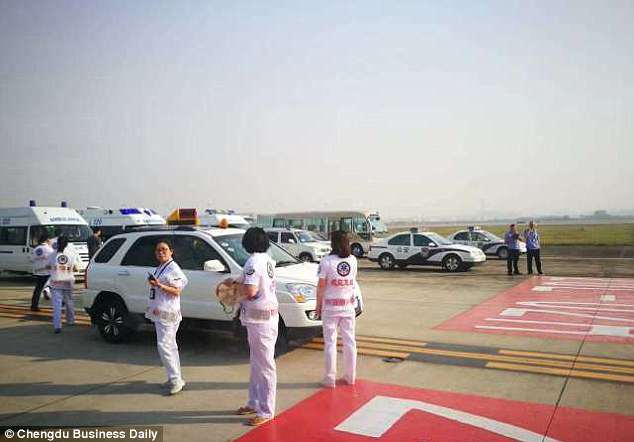 HOW TO BE PREPARED FOR AN EMERGENCY ON A PLANE

Be prepared during take-off and landing:

Take off and landing are the two most likely times for a plane to get into trouble, specifically, the three minutes after take-off and the eight minutes before landing.

There are several things that you can do during this time to make sure that you are best prepared for trouble.

The simplest of these are staying sober and awake! Often people like to celebrate a holiday with a few drinks at the airport bar before boarding, but this will not help if you need to be alert in an emergency, the same applies to sneaking in a nap as soon as you get into your seat. 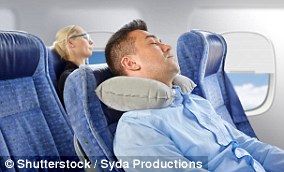 Once in your seat, avoid the temptation to remove your shoes – if the plane suddenly gets into trouble, it will be very difficult to put them back on before evacuation.

Shoes can be removed once the plane has finished take-off and should be put on before landing starts.

Read the safety card and listen to the cabin crew demonstration:

No matter how many times you have flown before, it is advisable to listen to the safety demonstrations – in case of an emergency, what you think you remember can easily be forgotten in the heat of the moment and speed is of the essence.

Just to highlight the importance of speed during an emergency, airfarewatchdog recently revealed that passengers have just 15 seconds to put on an air mask before the brain starts to be affected by lack of oxygen.

The site said in an article: ‘You might only have 15 or 20 seconds in the event of a cabin decompression, during which all oxygen would be sucked out of the plane, before you’d experience confusion and a euphoric “stoned” state, at which point you might forget everything you heard during the safety demo.

‘In 30 to 45 seconds you’d probably pass out. So it’s important to act quickly.’

The website also revealed that passengers can even forget how to remove their seat belt when panicked and tend to try and release it in the same way that they would in a car.

Look for the emergency doors:

In case of an emergency landing there is likely to be no light on in the plane and it may also be filled with smoke is there is a fire.

For this reason, it is always a good idea to check where the emergency doors are in advance. 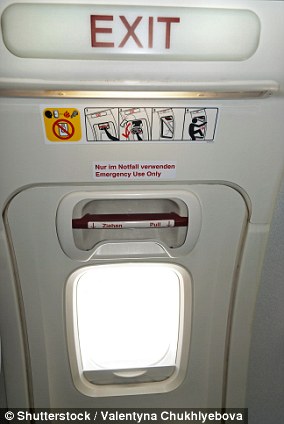 According to aviation safety expert Professor Ed Galea from the University of Greenwich, it is also a good idea to count the number of seat rows from your seat to the nearest exit.

He told the BBC: ‘I count the seat rows from my seating position to the exit.

‘So in the event of smoke or if emergency lighting fails and it’s very dark, I know the number of seat rows and I can feel my way to an exit. By counting the seat backs I’ll know when I’ve reached the exit row.’

Without you even knowing it, your eyes are being accustomed in case of smoke and bad lighting during take-off and landing when the lights are dimmed by cabin crew.

If you are lucky enough to be sitting next to the emergency exit, make sure that you are strong enough to open and throw the door if something happens – according to airfarewatchdog, on a Boeing 737 the emergency door weighs 40lbs.

Time is of the essence:

In a real emergency, there is extremely little time for passengers to make a safe escape – 90 to 120 seconds to be precise.

In the instance of a fire, there may be even less time as the smoke will choke passengers – it only takes three lungfuls of toxic fumes for a person to become unconscious.

According to The Telegraph, during the ‘golden period’ of 90 seconds, passengers should: ‘Move fast. Listen to flight attendants, get to an exit fast, check quickly that it is viable, inside and out, then get out and move as far from the plane as fast as possible.’

Leave your bags behind:

Because time is of the essence, the last thing passengers should do in an emergency is waste time by rooting around in the overhead cabins for their personal possessions – not only will you block the alleyway for others but you are risking your own life.

On top of this, it is inadvisable to take any bags with you while using the emergency inflatable slides.

According to Patrick Smith from the blog AskThePilot: ‘Those slides are extremely steep. They are not designed for convenience; they are designed to empty a plane of its occupants as rapidly as possible.

‘You’ll be coming down from two stories high in the case of a 777, at a very rapid clip, with others doing the same in front of you and right behind you.

‘Even without bags people are often injured using the slides. Add luggage to the mix and somebody is liable to be killed.’