Smiling a few feet away and smartly dressed in a pin-striped suit was William Bortrick, the publisher of the aristocratic bible Burke’s Peerage.

The three men were gathered to celebrate and mark the generosity of another figure in the room, Dr Mahfouz Marei Mubarak bin Mahfouz.

Society fixer Mr Wynne-Parker was an advisor to the Saudi businessman, who had agreed to donate a significant sum to Dumfries House, the 18th Century Palladian mansion in Ayrshire.

The Prince’s Foundation established by the future King has worked for years to painstakingly – and expensively – restore the property, with Charles overseeing every detail.

The event in October 2014 to open landscaped gardens and a fountain named after Dr Bin Mahfouz celebrated the first of a string of generous donations that he made to the Prince’s projects. 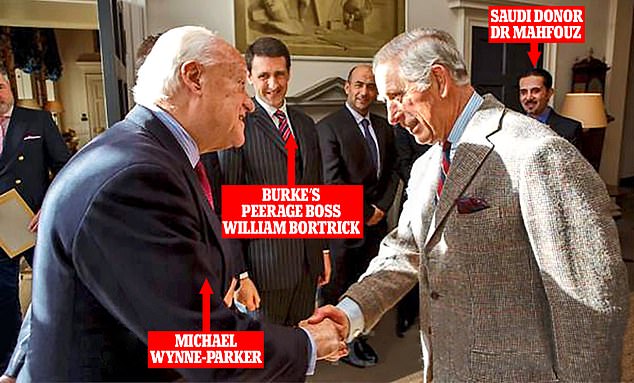 Standing in the grand entrance hall of Dumfries House, Prince Charles warmly clasped the hand of veteran fundraiser Michael Wynne-Parker (pictured above). The three men were gathered to celebrate and mark the generosity of another figure in the room, Dr Mahfouz Marei Mubarak bin Mahfouz (pictured, back right)

The following year, he reportedly gave £370,000 to the Castle of Mey, the Highlands retreat once owned by the Queen Mother and now another of Charles’ charitable ventures.

On this occasion, a nearby wood was named in the businessman’s honour and six benches were given plaques bearing his name and those of his relatives.

Supporting Charles may, however, have potentially offered more than benches and trees.

A letter obtained by The Mail on Sunday reveals the Prince’s Foundation was ‘willing and happy’ to support Dr Bin Mahfouz’s application for British citizenship and to recommend him for a knighthood. 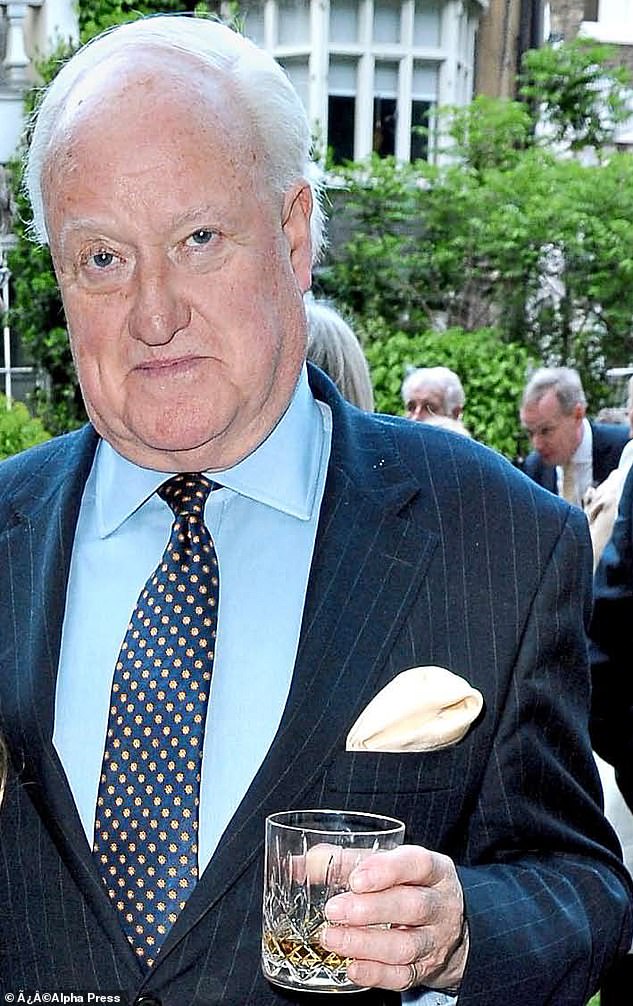 Last week, Mr Wynne-Parker (pictured) claimed to have arranged donations totalling £2 million from a Saudi businessman who had been invited to Dumfries House several times

The author of the note, written in August 2017, was Michael Fawcett, one of Charles’s most influential aides.

The revelation drags the royal ‘cash for access’ scandal far closer to the Prince’s doorstep.

Last week, The Mail on Sunday revealed an email written by Mr Wynne-Parker detailing how clients could pay six-figure sums to secure dinner with Charles and an overnight stay at Dumfries House.

After being out of print for nearly two decades, the once-revered aristocratic guide Burke’s Peerage may no longer be required reading in the country’s stately homes – but the name is still a powerful calling card.

Its chairman William Bortrick is a familiar figure in London’s private clubs and dining rooms and can often be seen hovering in the background at many of the functions and ceremonies attended by society fixer Michael Wynne-Parker.

He is also a member of the founding board of the Imperial Orthodox Palestine Society, which is chaired by Mr Wynne-Parker and has faced disputed allegations that it is a front for Russian influence.

Mr Wynne-Parker has dismissed such claims as ‘crazy’ and insists the society is a religious and cultural organisation.

Mr Bortrick is also an adviser to the Commonwealth Sambo Association, which champions a Russian martial art and combat sport which may feature in the 2028 Olympics and is strongly backed by Russian President Vladimir Putin.

The fighting techniques were developed by the Soviet Red Army in the early 1920s to improve unarmed combat.

Mr Wynne-Parker is president of the association and regularly presides over combat events.

The links between the two men are under scrutiny following claims that donations for The Prince’s Foundation could be sent through a Burke’s Peerage bank account.

Mr Bortrick has denied any wrongdoing and that the proposed arrangement, revealed in an email written by Mr Wynne-Parker and published last weekend by The Mail on Sunday, was ever discussed with him.

He said if he had been told about it, he would have ‘hit the roof’ because it was so inappropriate.

Burke’s Peerage was established by the genealogist John Burke in 1826, expanding over the years into various editions.

The firm was chaired from 1974 to 1983 by the entrepreneur Jeremy Norman, who founded the gay nightclub Heaven and established the fitness chain Soho Gyms.

The title was bought by Mr Bortrick in 2013, who now runs it with the Canadian investor and entrepreneur Sam Malin.

Irene Major, who is Malin’s wife and lives with him in a Gothic mansion in Kent, wrote on her Instagram page last week: ‘I’m not involved in selling access to Prince Charles and resent any implication that I am; any involvement I have with the Royal Family is for charity purposes.’

Burke’s Peerage says on its website that it intends to publish further editions, but is still in the process of updating records. The last printed edition was in 2003.

In the email, he proposed taking a five per cent commission on any donation, with the money sent via the bank account of Mr Bortrick’s firm, Burke’s Peerage Ltd.

Last week, Mr Wynne-Parker claimed to have arranged donations totalling £2 million from a Saudi businessman who had been invited to Dumfries House several times.

He did not say whether the donor was Dr bin Mahfouz or if he had accepted any fees or commission.

A spokesman for Dr Bin Mahfouz last night said Mr Wynne-Parker had advised the businessman until 2019 and been a trustee of his foundation until 2017.

He insisted, however, that Mr Wynne-Parker had played no role in the donation to Dumfries House, but had advised him to give to the Castle of Mey project, although there was no fee or commission for doing so.

‘Mr Wynne-Parker was a patron of the Castle of Mey before he met His Excellency and advised him to support that charity,’ the spokesman said.

‘That led to His Excellency being invited to explore the work of Dumfries House. Mr Wynne-Parker was aware of, but not involved in, the process with Dumfries House.’

The affair is the latest colourful chapter in Mr Wynne-Parker’s story of financial mishaps and misjudgments.

Once an aspiring politician, standing unsuccessfully as a Tory candidate in local elections in Norfolk, he was elected chairman of the Norwich Conservative candidate committee in August 1974.

He soon became a regular at the Monday Club, the Right-wing Westminster pressure group aligned with the Conservative Party, and proved to be a masterful networker, ingratiating himself with influential businessmen, politicians and royalty.

He even once introduced Saif Gaddafi, the son of the Libyan leader Muammar Gaddafi, to Margaret Thatcher at a book launch.

It was through the Monday Club that Mr Wynne-Parker met Jonathan Guinness, a scion of the brewery and banking family and now a peer, Lord Moyne.

The pair worked together on a series of business ventures with Mr Wynne-Parker’s consultancy firm Introcom.

Reflecting on those ventures in his 2011 book If My Table Could Talk, Mr Wynne-Parker wrote: ‘Though we were not highly successful in financial terms, we had plenty of adventures.’

One project was an airline called Tajik Air which ran into financial trouble and ceased operating in 1994, despite a summit arranged by Mr Wynne-Parker between the then Tajik Prime Minister Abdujalil Samadov and Mrs Thatcher.

The City of London fraud squad was reportedly called in after complaints from creditors.

Mr Wynne-Parker said at the time that Introcom had no financial involvement, but had only provided consultancy services.

Undeterred, Mr Wynne-Parker and Lord Moyne launched Access To Justice which rented out office suites and gave free legal advice to those seeking to overturn their convictions because of alleged miscarriages of justice.

It was claimed that the firm misrepresented itself as a charity and that a convicted fraudster was involved in its operations.

Margaret Beckett, then the Secretary of State for Trade and Industry, obtained a court order to shut down the company in the public interest.

Both Mr Wynne-Parker and Lord Moyne were banned from being company directors for five years in 2000 because of their roles in Access To Justice.

It was not the first time that Mr Wynne-Parker had been censured by the regulators.

Ten years earlier, his firm Wynne-Parker Financial Management had been shut down by financial watchdogs.

He was found guilty on 16 counts of misconduct and fined £10,000 with a judge saying that it seemed the businessman had ‘the clear modus operandi of a crook’.

‘I’ve never been taught to do business at all,’ Mr Wynne-Parker said in a 2003 interview. ‘I’m not the sort of chap who’s interested in money.’