Plenty of room with a view in eerie Florence: MATTHEW BELL only sees 10 other people on visit to Uffizi gallery compared to usual 5,500 a day – despite it being 150 miles outside country’s coronavirus lockdown zone

As I walked into Florence’s grand Uffizi Gallery on Saturday, I braced myself for the inevitable throng of tourists scrambling past each other to get a glimpse of Botticelli’s Birth of Venus and Primavera.

After all, the Uffizi receives some 5,500 visitors every day – each of them desperate to jostle to the front of the ten-deep crowd that normally stands in front of the Renaissance masterpieces.

Imagine my surprise, therefore, on being met with a completely empty room and an eerie silence interrupted only by the echoing of my footsteps.

During my entire visit, I only spotted ten other people – even though the city council has made entry to every museum in the city free in an attempt to overcome a climate of fear. 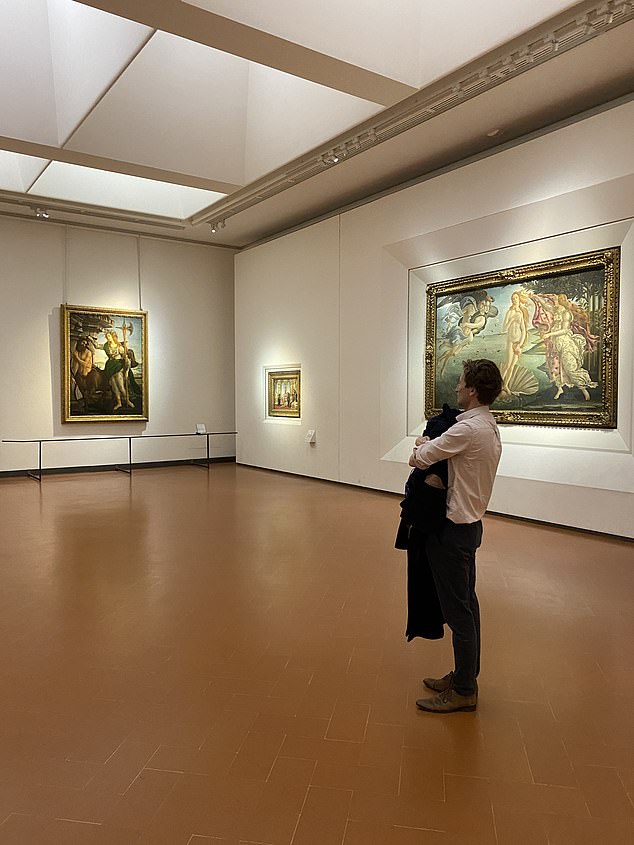 Matthew Bell writes that the grand Uffizi Gallery in Florence has been deserted. He is pictured above visiting the famous gallery on Saturday 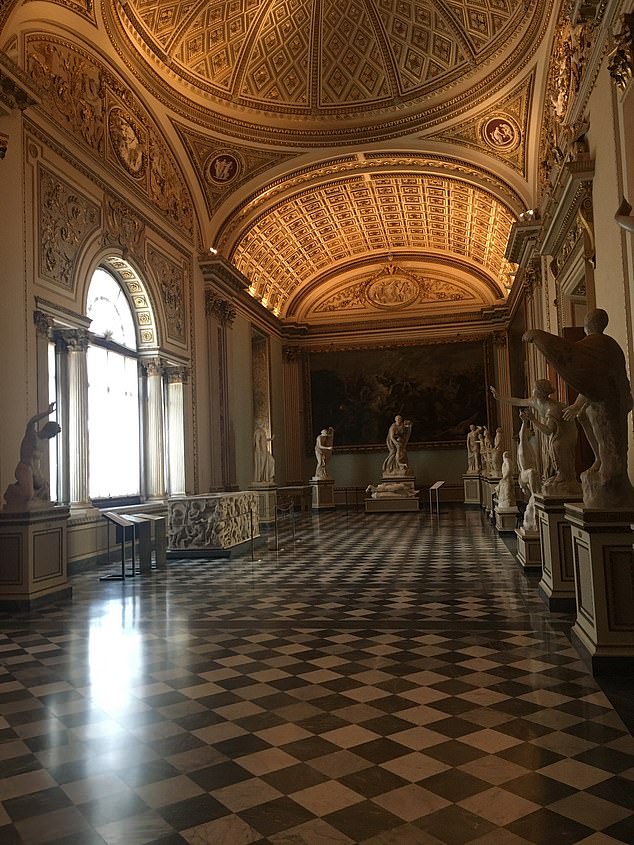 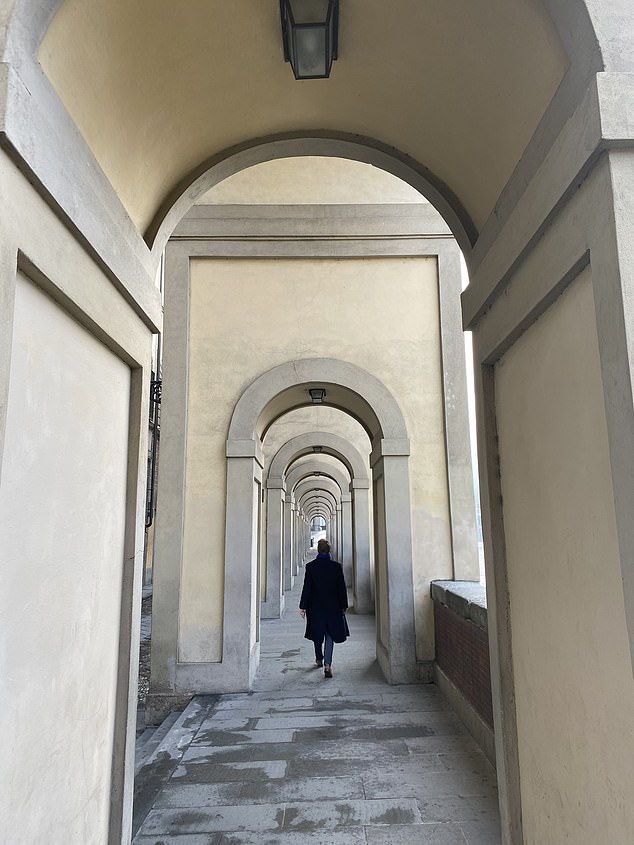 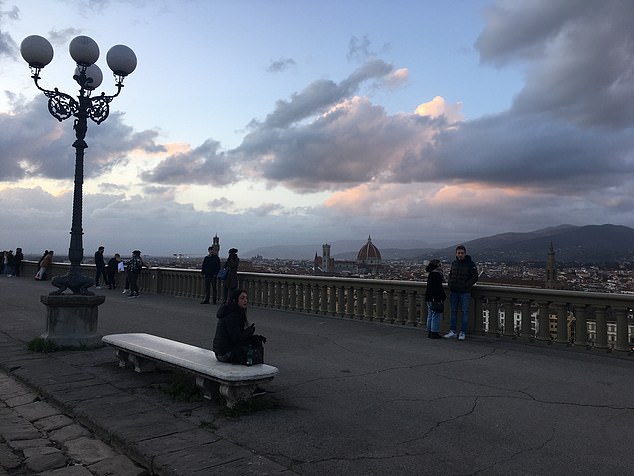 Meanwhile, in the streets surrounding the cathedral, bus-loads of iPad-clutching tourists had been replaced by… nothing. Even though it is 150 miles away from Italy’s outbreak of coronavirus, and isn’t in the quarantined northern zone, Florence has morphed into a ghost town.

Indeed, the gallery’s muted atmosphere couldn’t have been more different to the frenzied scene playing out in Milan, just under 200 miles north.

There, the city’s railway stations had descended into sheer panic, as thousands of Italians scrambled to move south ahead of Saturday’s state-imposed lockdown.

Florence has a population of 350,000, but is visited annually by 16million people. Overnight, they have evaporated, returning the city to the genteel pace reminiscent of 1908, when E.M. Forster set his famous novel, A Room With A View, there.

For intrepid visitors like me and my wife (who works for Ortigia, a soap company based there), it’s an unexpected bonus to a grim global situation. But for the taxi drivers and hoteliers, who rely on tourism to feed their children, it’s a nightmare with no end in sight.

One sandwich vendor said business was down 85 per cent on last year, while a taxi driver told me he is getting just one job every two hours.

At Cammillo, the most fashionable restaurant in town, where booking is essential, they aren’t even bothering to run the reservations ledger. 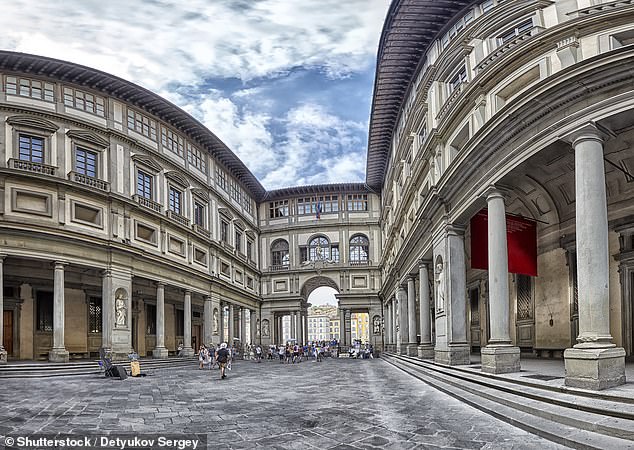 Florence’s Uffizi gallery entrance is pictured above. It has been deserted despite being 150 miles away from the quarantined areas 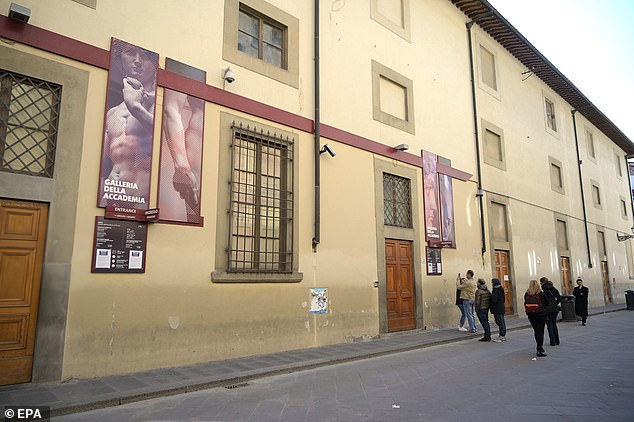 Meanwhile, in the 80-bedroom hotel near to where we’re staying, there was only one resident over the weekend, leaving the 150 staff to twiddle their thumbs. And with Italy now in lockdown, one hotelier told me that 120 hotels across the city will have to close.

To say the impact on Italy’s economy could be devastating is an understatement. It is hugely dependent on tourism, which contributes roughly 13 per cent to its GDP.

But speak to any travel agent in Florence and the outlook is desperate – cancellation after cancellation, stretching across the spring and into the crucial summer months.

Late last week, the government ordered restaurants to be closed by 6pm and to ensure diners sit one metre apart – a farcical situation for smaller traditional ‘trattorias’ where you sit hugger-mugger with strangers.

While public areas such as cinemas, gyms, nightclubs and ski resorts have been closed in quarantined zones, at the Odeon in Florence, housed in the Palazzo Strozzi, you can only see a film if you leave one seat empty between you and the next person. 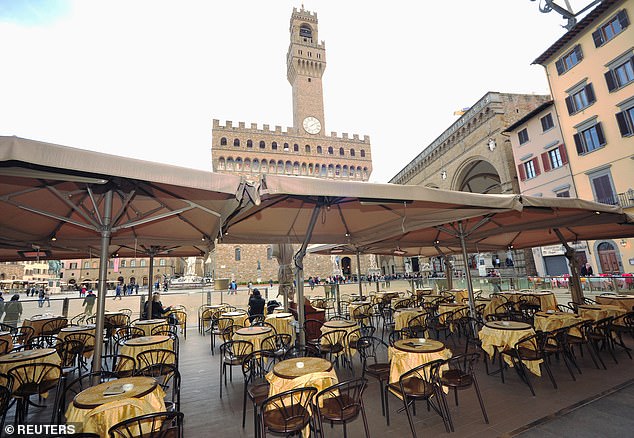 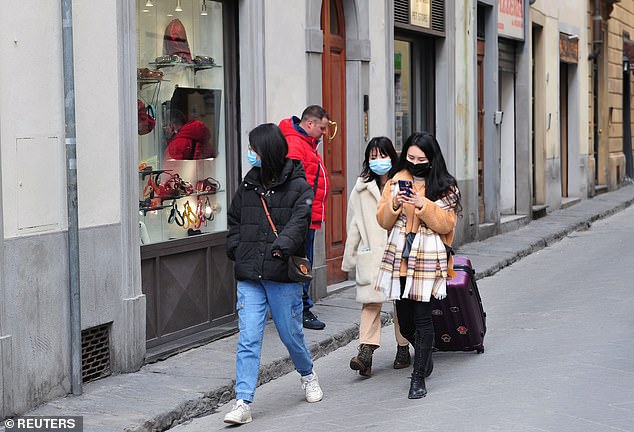 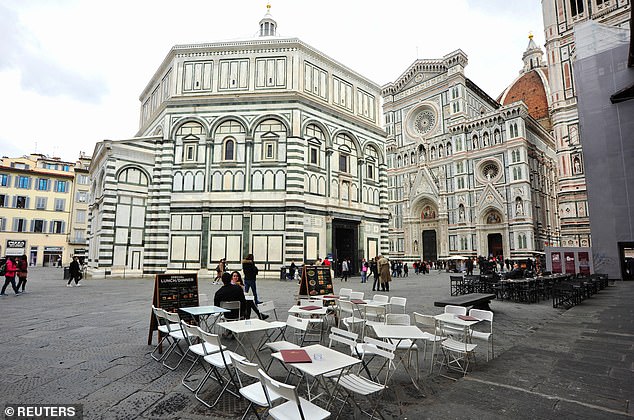 At the bar where we get our morning coffee, there are so few patrons that the baristas turn up the music and dance to stave off the boredom.

We go to a different gallery every day, astonished to find ourselves alone with Michelangelo’s David and countless Renaissance masterpieces.

While the number of Italian cases leapt from 5,883 to 7,375 in a single day yesterday, Tuscany, of which Florence is the capital, has recorded about 20, making it no more dangerous than Scotland.

That may change, but for now we’re making the most of Italy’s empty jewel.