Bhubaneswar: Six men in India have been arrested for killing a woman and her four children, including a 10-month-old baby, over suspicion that she was a witch who killed a girl, police said on Tuesday.

Angry villagers broke into the woman's home in eastern Odisha state and hacked her and her children to death with farm tools before dumping their bodies in a well, said investigating officer Sushant Dash.

Dash said the six, including a local witch doctor, were charged with murder and other offences under Odisha's Prevention of Witch Hunting Act on Sunday. 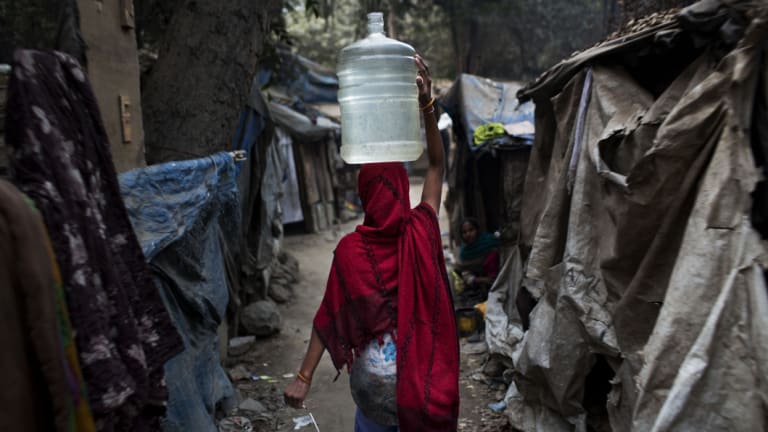 Men and women are often branded as witches and assaulted or killed in parts of India, particularly among poor and tribal communities.Credit:AP

"They have confessed that they committed the murders for witchcraft," Dash told the Thomson Reuters Foundation, adding that a complaint by the woman's husband, who was away on the day of the killings, prompted them to hunt for the suspects.

"Two or three more people might be arrested in the coming days."

Men and women are often branded as witches and assaulted or killed in parts of India, particularly among poor and tribal communities.

According to the National Crime Records Bureau, there were 134 cases of murders linked to witch hunts in 2016, with Odisha recording the most incidents after neighbouring Jharkhand state.

Odisha state is part of India's "red corridor", where a Maoist insurgency and marginalisation have contributed to some of the worst literacy, child malnutrition and maternal mortality rates in the country.

Dash said the villagers blamed the woman for the illness and death of a 12-year-old girl after the witch doctor – a traditional healer who treats ailments believed to be caused by witchcraft – told them she had cast a spell on the child.

Campaign groups say superstition and occult beliefs are prevalent among people living on the margins of society with limited access to healthcare, education and development.

"It is a form of violence against women and strict law alone cannot stop such crimes, we need to educate them," said Anuradha Mohanty, head of the People's Cultural Centre, a local child and women's rights group.

A 50-year-old man killed another woman in Odisha earlier this month, accusing her of using sorcery to make his son sick.