England’s counter terror chief today warned that he does not have the resources needed to fight the growing threat from extremists.

He confirmed that there are a record 700 terror investigations are being carried out across the country, which has seen a ‘sustained shift’ in the threat posed.

He said that the biggest threat is posed by Daesh-inspired Islamist extremists but that the danger of the far right is growing in a ‘disturbing’ trend.

And he said that Britain’s counter terror police are not yet able to ‘match’ the threat posed by extremists and hostile states like Russia.

And he said that police forces are struggling and urged ministers to give the police force a long term cash settlement.

In a plea to Chancellor Philip Hammond ahead of next week’s Budget, he said: ‘I don’t have to argue those points with the Home Office, they accept that is what’s required.

‘Now what’s required is a Treasury that is sympathetic.’ 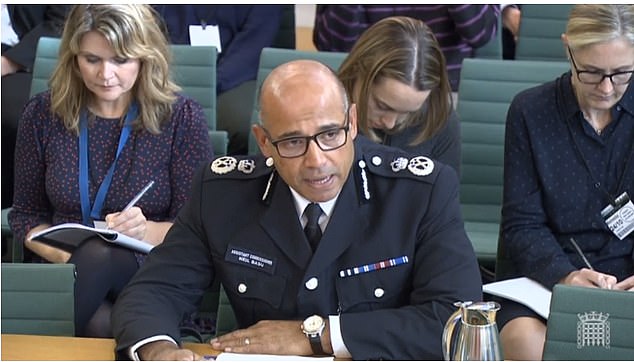 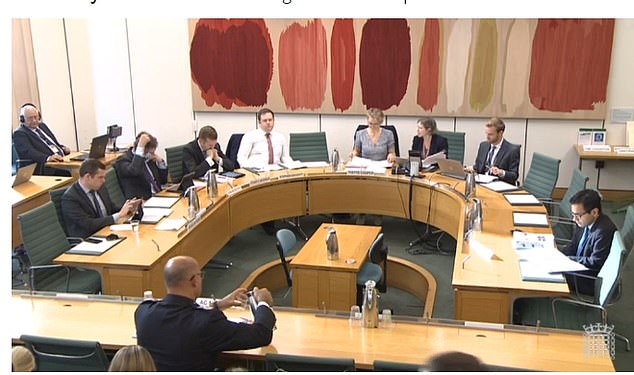 The counter terror chief (pictured in parliament today)  confirmed that 700 terror investigations are being carried out across the country, which has seen a ‘sustained shift’ in the threat posed

He gave the stark warning to MPs on the Home Affairs Select Committee who grilled him on the state of play of counter terrorism.

He told MPs: ‘My predecessor Mark [Rowley] when he was in front of you a year ago today, quote – “despite our best endeavours we are not yet a well matched to the threat than we were a year ago”.

‘One year on I would like to tell you we are matched to the threat, but the reality is we are not.’

He added: ‘Matching that new threat, including now extreme right wing terrorism and hostile state activity requires new ways of working and for us to maintain our resource.’

He said that local police forces are struggling with squeezed budgets – and called for the police to be given a long term funding settlement.

What were the terror attacks which hit Britain in 2017?

Here is the list of terror attacks which wreaked carnage on Britain’s streets in 2017:

He drove a hire car across Westminster Bridge, killing four pedestrians on the pavement and injuring dozens more.

He then leapt out of his crashed car and ran into Parliament where he stabbed to death police officer Keith Palmer.

Salman Abedi blew himself up outside an Ariana Grande concert in Manchester killing 22 people – including many children.

Three killers ploughed their cars int pedestrians in London Bridge before going on a bloody knife rampage in Borough Market.

Rachid Redouane, Khuram Butt and Youssef Zaghba – who were all wearing fake explosive vests – killed eight people before they were shot dead by armed police.

He said: ‘I depend entirely on well resourced local police forces, from neighbourhood policing through the crisis response.

‘But it is extremely difficult for CT (counter terrorism) policing when we are constantly working to short term funding arrangements so a longer term funding settlement would greatly assist.’

Speaking this afternoon, he said the five terror attacks which killed dozens and injured hundreds last year ‘were not a temporary escalation of the threat, they are a sustained shift in that threat’.

He added: ‘The UK CT (counter terror) machine to this day continues to run red hot.

‘The attacks demonstrated both the breadth of targets and methodologies employed has increased.

‘And the greatest concern to me comes from simple attacks on softer targets that are cheap to mount, easy to disguise and therefore harder to see and stop.’

He said that the ‘overriding’ threat to the UK remains Islamist extremists inspired by Daesh – also known as Islamic State – or al Qaeda.

But he warned that that there has been a ‘very disturbing’ rise extreme right wing activity.

Five people were murdered and nearly 50 were injured when Khalid Masood, 52, ploughed his car into passers by in Westminster Bridge before leaping out and stabbing to death PC Keith Palmer in the grounds of Parliament.

Since then, 17 terror attacks have been thwarted since Westminster attack – including four extreme right wing terror plots.

Mr Basu warned MPs: ‘I expect those figures to increase.’

And he warned that the ‘greatest threat’ comes from social media, where hate-filled groups post their propaganda.

He said that big tech has ‘finally realised’ they have to do something about the extremist material being posted on their sites.

He said: ‘The truth is 2017 has been a shock and a watershed year for a lot of people, and I think that includes  big tech.’ 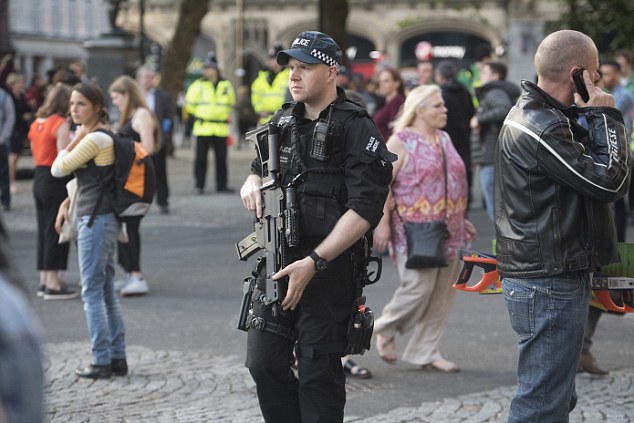 Britain is facing a growing threat from extreme right-wing terrorism which has surged in the wake of last year’s attacks on London and Manchester, Britain’s counter terror chief warned (pictured, an armed police officer stands guard in Manchester after last year’s terror attack) 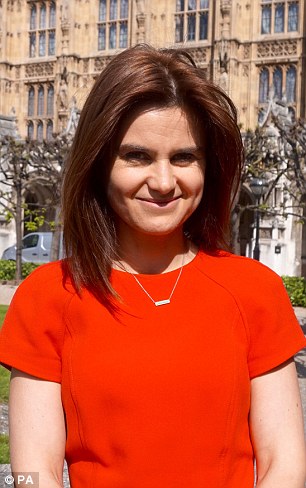 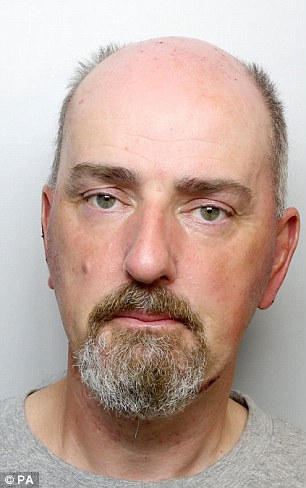 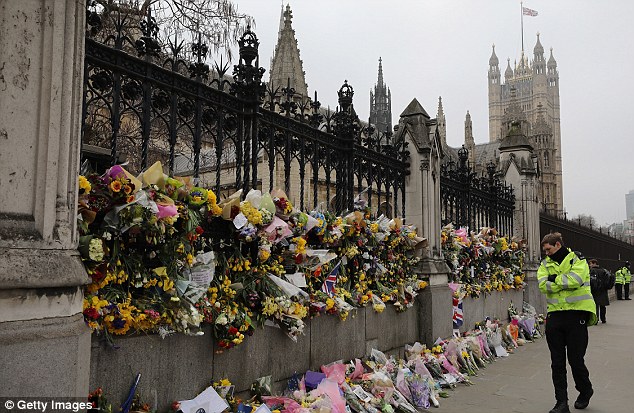 A police officer looks at flowers left in tribute to those murdered in the Westminster Terror Attack. Neil Basu said the attack sparked a renewed burst of terror activity in the UK

He added: ‘I think they have recognised that it is no longer good enough to say we are platforms when they are actually publishers…were they putting enough resource, effort, and people into this problem? Not sure they were.

‘I think they are really stepping up.’

He urged MPs across the political divides to back the anti-extremist programme Prevent.

The counter terror officer warned that he is very concerned about British jihadis returning from war-torn Syria hardened terrorists – but said few prosecutions have been brought because there is simply not the evidence to take them to court.

And urging ministers to give police more money, he told MPs: ‘When I was a borough commander I remember a lot of charities we were supporting at the time would spend nine months out of the 12 months fighting for funding for the next year,

‘I have been in counter terrorism for four years  and i cant think of a time when I didn’t have to prove that our budget was required on a yearly basis. I’m not sure that’s a great model.’

He said he has ‘no doubt’ at all that the Home Secretary Sajid Javid understands understands the pressure he is under.

He said that while he got more money last year he needs a commitment to future funds so that his resources do not suddenly collapse next year.