Victoria Police will consider the unprecedented step of shutting down public transport to counter future anti-lockdown protests, and said they would once again use new paramilitary anti-riot teams if needed to confront increasingly violent demonstrations.

Chief Commissioner of Police Shane Patton described Saturday’s clashes in the city as probably the “most violent protest we’ve seen in nearly 20 years”, and said police’s first-time use of military-style rifles that can fire pepper spray pellets was “absolutely justified” as a response to the growing size of protests and displays of violence. 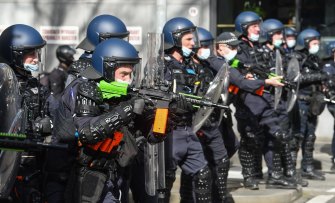 More than 4000 protesters defied public health orders to march, the largest demonstration since government-ordered lockdowns to combat the spread of COVID-19 began in March 2020.

In Sydney, police smothered planned protests by having 1400 officers set up checkpoints around the city, stopping 38,000 vehicles in what NSW Police Minister David Elliot described as a “temporary stop to the freedom of movement”. They also laid scores of charges and fined more than 260 people.

In Melbourne, the protests were marked by wild, running clashes with police that left nine officers injured. It remains unclear how many demonstrators were hurt. More than 200 arrests were made.

Victoria Police deployed a series of new anti-riot measures — including the pepper pellets and hard squash-like balls — in response to what they said were elements in the crowd throwing bottles, marbles and flares. 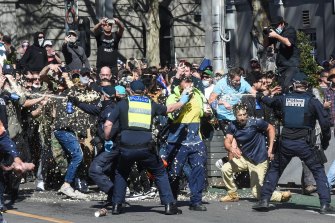 The protest in Melbourne on Saturday was attended by thousands, and turned ugly. Credit:Justin McManus

Watchdog group, the Police Accountability Project, warned the projectiles from these kinds of rifles could cause serious injuries to people’s necks, heads and torso, as well as exposing them to potentially dangerous levels of chemical contamination.

But Mr Patton said use of force was taken in self-defence and to “de-escalate” the conflict. “They did what they are supposed to do.

“These people came along with an intention — and that was pretty clear from what they were armed with when they came here — to be confrontational and engage in criminal activity. That’s not protesting about freedom, that’s criminal activity,” Mr Patton said.

He also pledged that other options were on the table to confront future protests, one of which is already known to be planned for September. 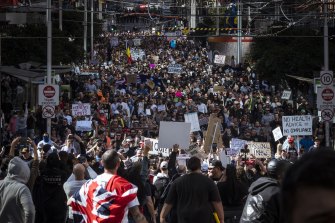 “We have now seen two or three of these protests in a short period of time with violence escalating each time,” he said. “To shut down the transport network to prevent people coming in … that’s a huge call, but it’s one that we’re now going to seriously entertain on the next occasion because I’m not going to tolerate this occurring again.”

Anthony Kelly, trainer with Melbourne Activist Legal Support, said that while the organisation had not sent legal observers to the protests because of the threat from COVID-19 and the involvement of far-right and white nationalists in the anti-lockdown movement, it was concerned about the “high risk of injury” from the use of this kind of weaponry.

“Because of the risk of severe, permanent or life-threatening injuries their use should be limited to only the most extreme circumstances. The trouble with any of these weapons is if they are not used in a careful or proportionate way.”

In 2018, Victoria Police was granted more than $35 million from the Andrews government to underwrite a major escalation in the force’s anti-riot capabilities. Then chief commissioner Graham Ashton said the deployment of the new equipment would be “confronting”.

The Saturday protests are believed to be the first time Victoria Police has used the new weaponry against civilians. A Victoria Police spokeswoman said the force “hoped we would never have to use this equipment” but that it was important for the safety of officers to have the option if required.

“The crowd control equipment enables police to safely engage with people who choose to act in a violent manner from a greater distance without needing to engage in a hand-to-hand physical confrontation,” she said.

But solicitor Jeremy King, who specialises in police misconduct, said that regardless of what happened at Saturday’s demonstration there were legitimate reasons to be concerned about Victoria Police’s history of escalating the use of force at all types of protests.

“Victoria Police have a track record of being heavy-handed and over-weaponised with respect to dealing with protesters.

“These circumstances are quite different given that we are in a pandemic, but I would be very concerned long term about the ever-increasing militarisation of Victoria Police and its use of these tactics and weapons in peaceful protests post-pandemic.”