Police are ‘extremely concerned’ for mother, 41, who walked out of hotel leaving family, cash, phone and bank cards behind her in early hours

Lucy Walker, 41 (pictured), has been missing since leaving her hotel this morning at 4.20am – Greater Manchester Police are ‘extremely concerned’

Police have launched a desperate appeal to try and find a mother who has not been seen since leaving her hotel earlier this morning.

Lucy Walker, 41 from Bristol, left the Premier Inn on River Street by Deansgate Locks in Manchester at 4.20am.

She left the hotel without her phone, bank cards or any money, something which was described as being ‘completely out of character’.

Greater Manchester Police say they are ‘extremely concerned’ about the mother.

Ms Walker had come to Manchester with a friend and family on Bank Holiday Monday.

On the same day, she went to Old Trafford to watch the Premier League match between Manchester United and Tottenham Hotspur.

Together with her friend and family, she was due to return to Bristol today.

However, no one has heard from her since she left the hotel and she was last seen walking onto Medlock Street towards Deansgate Locks, Manchester.

When she was last seen, she was wearing the same black dress as the one in the picture of her released by police.

She also has shoulder-length blonde hair.

Officers say that despite extensive enquiries and trawling through CCTV, they have been unable to find her.

Detective Inspector Mark Astbury, from GMP’s City of Manchester Division, said: ‘We are doing everything possible to find Lucy and are desperate to hear from people who think they might have seen her.

‘When she went missing she didn’t take her phone, any money or bankcards, which is completely out of character and also makes it more difficult for us to try and establish where she has been. 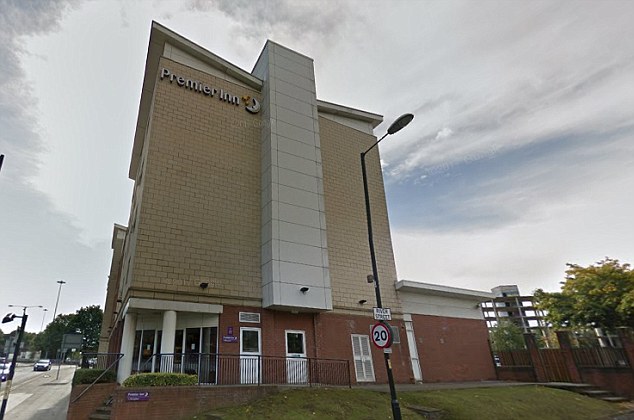 The 41-year-old left the Premier Inn (pictured) by Deansgate Locks in Manchester at 4.20am

‘We have had officers in the city all day trying to piece together her whereabouts.

‘Her family are understandably beside themselves with worry and we want to re-unite this mum with them.

‘Our priority is to make sure Lucy is safe and well and I’d urge everyone to look at the picture of her and try and recall if you saw her.

‘If you were around the hotel at that time, or were in the city early this morning, please try and remember if you saw someone like Lucy.

‘Even the tiniest bit of information could help us find her.’