ITV reality star and fitness trainer David Lundy, 26, was suicidal after police found electric stun gun and cocaine when they searched his bedroom at his mother’s house

A reality TV star caught with cocaine and a stun gun in a police raid on his bedroom walked free from court after a judge heard he felt suicidal at damaging his ‘brand’.

David Lundy, 26, who reached the final of Survival of the Fittest, was in bed when police found the weapon and two wraps containing the narcotic at his Morden, South London, home on December 21 last year.

The model and bodybuilder told officers the cocaine was just, ‘a little bit of sniff for a Christmas party.’ 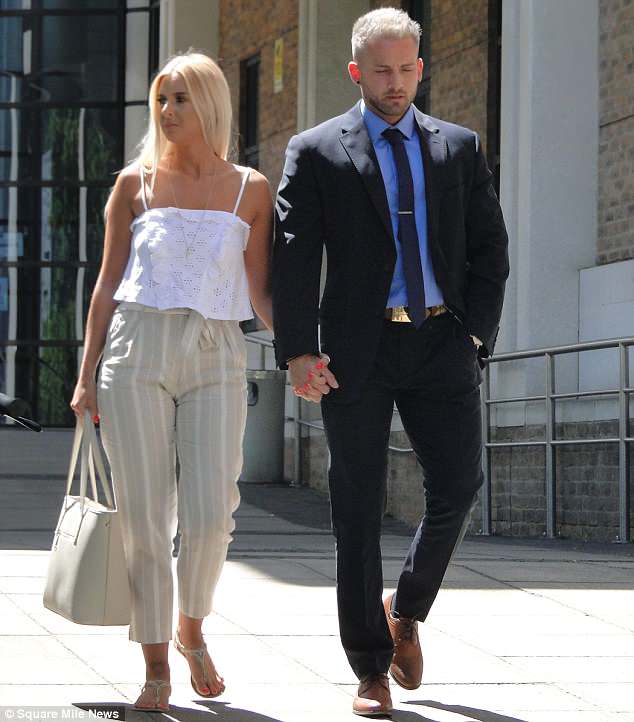 David Lundy, 26, pictured outside court, was in bed when police found the weapon and two wraps containing the narcotic at his Morden, South London, home on December 21 last year

The raid was before he made the final of the show – dubbed Love Island’s winter alternative – which was shot in South Africa featuring teams of Boys v Girls.

Kingston Crown Court heard he got the stun gun from a security guard at a night club where he used to work before he rose to reality stardom.

Prosecutor Nicholas Dunham told the court: ‘Police officers executing a search warrant went to David Lundy’s home address. The door was opened by his mother, who said he was upstairs asleep in bed.

‘Officers went upstairs and woke him up and asked if there were any guns or weapons in the room. He said there was a torch with an electric thing on the end in a chest of drawers. 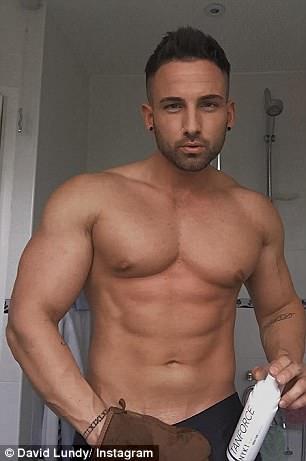 The model and bodybuilder told officers the cocaine was just, ‘a little bit of sniff for a Christmas party’

‘The officer opened the drawer and found the black torch described by Mr Lundy.

‘They searched the wardrobe and Mr Lundy directed them to two paper wraps and said: ‘It’s coke. Some stuff for a Christmas night out.’

‘He was arrested and made no reply and taken to the police station, where he made no comment in interview.’

The ‘torch’ was tested by expert Nicola Hater, who said: ‘It was a duel-purpose hand-held shock device, known as a stun gun with a torch attached to it.

‘It was covered in black tape and the meta heads were flush with the outer casing. It was powered by an integral chargeable battery.’

The stun gun was tested and was in working order, delivering an electric charge.

Lundy was given the stun gun a year and a half earlier while employed as a bouncer at the West End’s Hippodrome nightclub.

The court heard while he was working there he was given the object by a fellow employee.

Oliver Blunt, QC, defending Lundy, said: ‘It was found in a chest of drawers. Mr Lundy had not handled it for over eighteen months and dumped it in a drawer. It was not even charged.

‘As his personal circumstances are concerned he is now 26 years of age. He is of good character and he is by way of occupation a freelance model and personal trainer.

‘In terms of his notoriety, he participated in a programme called ‘Survival of the Fittest’ it was an eight-week programme and in fact my client managed to reach the final.’

‘A doctor’s report describes the depressive and anxiety issues that this defendant suffers from and the fear engendered in him from damaging the brand he has worked so hard for.’

‘He has had thoughts of suicide, but has been persuaded from that as his mother needs his assistance and support.’

The court heard Lundy is due to take over management of a government-run Woking fitness centre on July 1, on a salary of £23,500.

Lundy assists his mother Tracey Jane Lundy in caring for his sister Emma, 29, who has cerebral palsy and severe epilepsy.

Mr Blunt added: ‘Despite suffering from depression and anxiety himself he has helped others as an ambassador for that condition.’

‘He is a volunteer with ‘Kingston Street Pastors’. Mr Lundy has a great relationship with Kingston Police.’

The lawyer also produced a reference commending Lundy for staying with and helping a bleeding young woman suffering a serious head wound outside the Hippodrome.

The court also heard he has contracts with three Public Relations companies, including Toto and Streamline. as he pursues a celebrity career and fear he may fall foul of their ‘unacceptable behaviour’ clauses and be dumped.

‘There is a risk that Mr Lundy’s pleas could result in termination of his contracts. That he has damaged his reputation,’ added the QC. ‘There are a lot of really positive features about this young man, who appears before the court for the first time and is of good character.’

Judge Georgina Kent told Lundy: ‘It’s dangerous because weapons like these can be used to incapacitate and in the wrong hands be used to inflict serious harm.

‘It is sold in some countries as self-defence, but not in this country.

‘You have no previous convictions. From what I have heard you are a hard-working man of positive character with medical issues of your own and relied on by your family.

‘You worked as a doorman. You knew this weapon was prohibited and potentially dangerous.

‘As a fitness instructor you do not need me to tell you how dangerous Class A drugs are.’

He was sentenced to six months jail suspended for 12 months with 120 hours unpaid work and fined £75 for possession of cocaine and ordered to pay £670 costs.