A stoned driver who led police on a terrifying 146mph chase along a busy motorway in the middle of the day has been jailed.

Adrian Osiecki, 30, was driving without a licence or insurance when he covered 21 miles in just 12 minutes at an average speed of 105mph along the M40.

A court heard it was ‘frankly remarkable’ that nobody was seriously injured or killed as the motorist, high on cannabis, sped away from cops after smoking a spliff.

Traffic officers had tried to pull over Osiecki in his high-powered Mercedes c200 after discovering he was driving on cloned plates near Oxford on February 1.

But the caravan repair man sped off onto the motorway near Banbury where he overtook and undertook cars at break-neck speeds.

Osiecki weaved between other traffic, including HGVs, and undertook motorists by belting along the hard shoulder at double the legal speed limit.

He left the carriageway at junction 15 for Warwick where he lost control of his car and crashed into a barrier at a roundabout.

He tried to flee the wreckage but was caught on foot by officers in woodland where he was found to have almost double the legal limit of cannabis in his system.

Osiecki, of Coventry, later pleaded guilty to dangerous driving, driving with cannabis in his system and having no licence or insurance. 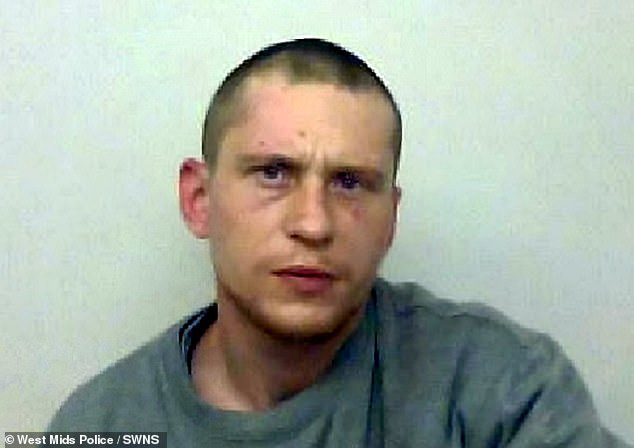 Adrian Osiecki, 30, was driving without a licence or insurance when he covered 21 miles in just 12 minutes at an average speed of 105mph along the M40 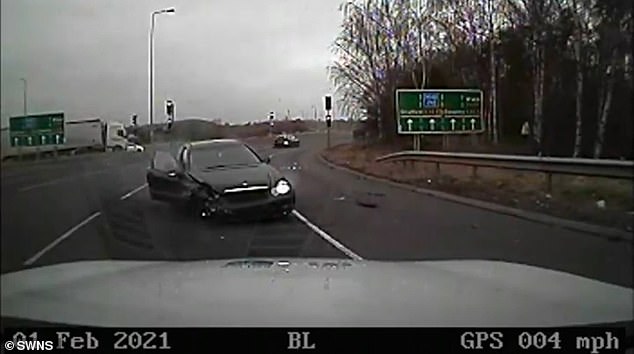 He was jailed for 18 months and banned from driving for 40 months at Warwick Crown Court on Tuesday.

Sentencing, Judge Anthony Potter told him: ‘You purchased a car which you were unable legally to drive because you had had nothing other than an expired provisional licence.

‘You were driving without a licence and without insurance and with a component of cannabis almost twice the legal limit.

‘When the police tried to stop you on the M40 you set off driving dangerously.

‘It is frankly remarkable, having seen the footage of some of your driving, that you did not cause someone serious injury. 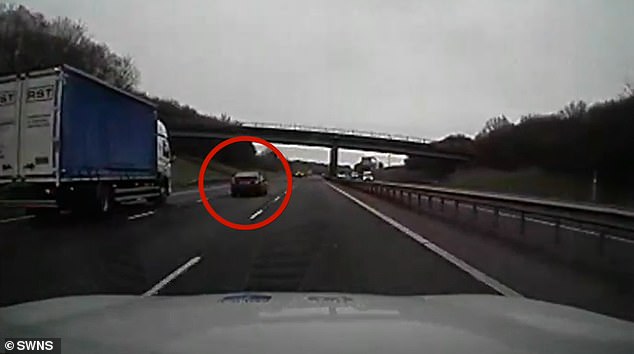 ‘The traffic was far from light. There was traffic in all three lanes when you sought to overtake a vehicle already in the fast lane by forcing your way at 120mph between that vehicle and the central barrier.

‘It is remarkable that you did not cause a pile-up at that stage, and I have seen other manoeuvres showing a complete disregard for the health and well-being of other road-users.

‘You were pursued for 21 miles in the space of just 12 minutes, which means your average speed was 105mph, and at times you reached twice the legal motorway speed limit.

‘The nature of the danger you posed must have been brought home to you when you came off at probably one of the busiest junctions on the M40 where your handling of the car was so inept that you crashed into the barriers.

‘The only possible way I can punish you is by making this an immediate sentence.’ 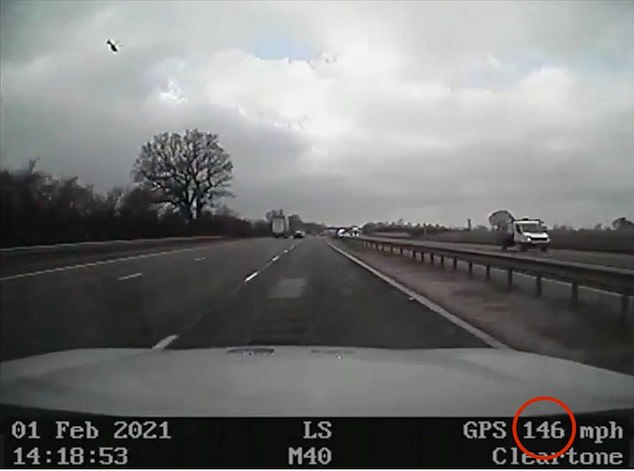 Osiecki, of Coventry, later pleaded guilty to dangerous driving, driving with cannabis in his system and having no licence or insurance. Pictured: Police drive at 146mph attempting to keep up with the driver

The court heard police were alerted to Osiecki by an ANPR camera which highlighted the Mercedes C200 number plate actually related to a Vauxhall.

Police officers saw the Mercedes on the A34 at 1.37pm, but were unable to stop it as Osiecki sped away.

Prosecutor Charles Crinion said: ‘Other officers in a marked car then came across the defendant at just after 2pm on the M40 between but he accelerated away.

‘He drove at excess speeds of up to 140mph on the motorway, undertaking and overtaking other vehicles.

‘It ended in a crash, with him hitting a roundabout after covering 21 miles in 12 minutes, an average of 105mph.’

The court was told Osiecki also had previous convictions including careless driving and driving without a licence or insurance.

Philip Vollans, defending, said his client had bought the car to obtain a job after work dried up during the pandemic.

He said: ‘We have an individual who panicked, who indicated quite openly in interview he was not entirely sure why he behaved as he did.

‘He had purchased the car that day in order to try to obtain work as a caravan repairer, which was a job he had undertaken previously.’