Several police officers have been wounded in a shootout in Jersey City, in the US state of New Jersey, after local reports said two gunman fired on authorities. 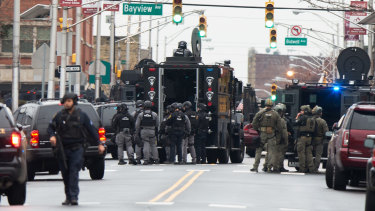 "Today reminds us of their bravery and the sacrifices they, and their families, make for our communities," Murphy said.

The state's police officer union said that its "officers have come under attack and we have several wounded".

"Today is a horrific day," the New Jersey State Policemen's Benevolent Association said in a tweet, adding, "Our hearts are heavy and the violence is not over."

The violence also prompted lockdowns in all 43 of the city's public schools, Jersey City Board of Education President Sudhan Thomas told local media. 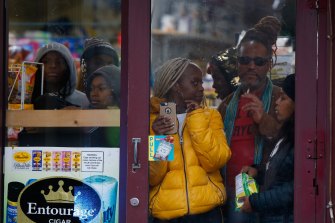 Bystanders look out from a store as law enforcement officers arrive at the scene in Jersey City, N.J. Credit:AP Photo/Eduardo Munoz Alvarez

"All students and staff are safe," the School District of Jersey City said in a statement.

Volleys of gunfire could be heard until about 2 pm, The Associated Press reported.

"I can hear the gunshots," Andy Patel, who works at a liquor store three blocks away, told AP. "It's like firecrackers going off. They were shooting like crazy about an hour ago. … The cops were clearing everyone off the streets."

Special operations officers from the New York Police Department were also on scene, NYPD said, and New York City Mayor Bill de Blasio said the city is "ready to assist in any way we can."

The New Jersey police union said in a tweet that "We need a lot of prayers right now for Jersey City officers."