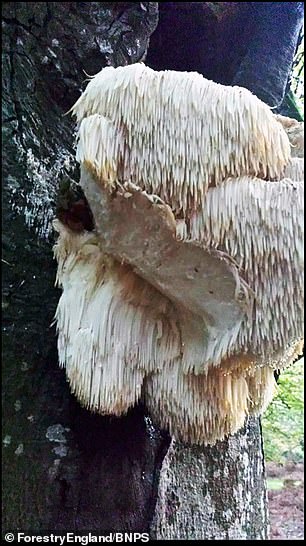 Police have launched an investigation into the theft from the New Forest of a rare edible mushroom said to have medicinal properties.

A chunk of the long-stranded fungus was sliced off a large specimen growing on the trunk of a tree.

Colloquially, the fungus is variously known as the lion’s mane mushroom, the bearded tooth fungus, the hedgehog fungus or bearded hedgehog mushroom, the pom pom mushroom, or the satyr’s beard.

Scientists have identified compounds in the fungus – which has long been used in Chinese medicine – shown to help those suffering with cancer or diabetes.

It is so rare it was made the subject of special legal protections in 1998 and it is a criminal offence to pick it without authorisation.

The bizarre theft comes weeks after the Forestry Commission put up signs warning the public not to pick mushrooms in the Hampshire National Park to help the local eco-system.

In recent years the New Forest is said to have been targeted by an army of commercial foragers who collect large amounts of mushrooms and sell them to trendy London restaurants.

The Forestry Commission is not revealing the exact location of the bearded tooth – Hericium erinaceus – was taken from, as they don’t want to encourage others to look for it.

The fungus can be easily identified by its fronds, which look like a cascade of thin white icicles between three and ten inches wide, each of which grow to around three inches long.

They are stemless, and produce spores on small, white teeth close to the surface of wood on which they grow. Initially white, the bearded tooth turns yellow or brown with age.

Under Section 13 of the Wildlife and Countryside Act 1981, it is a crime to ‘intentionally pick, uproot or destroy’ bearded tooth mushrooms.

Schedule 8 was updated in 1998 to include the Hericium erinaceus, listed in the legislation at the Hedgehog Fungus. 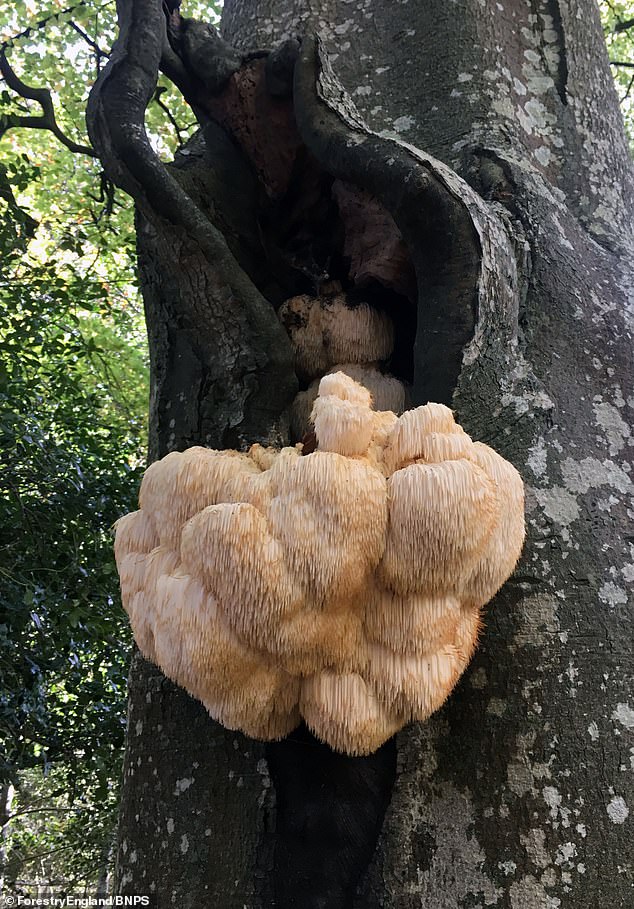 The magnificent New Forest specimen before the theft. Hampshire Police and the Forestry Commission are not releasing the exact location of the fungus for fear of copycat mushroom-slicings

A spokesman for Hampshire Police said: ‘Last week officers were contacted by the Forestry Commission who reported large quantities of fungi being taken from the New Forest. The matter is under investigation.’

It is unclear why the edible fungus, which is said to assist with the management of Alzheimer’s and dementia, was taken.

Daniel Butler, who teaches mushroom courses at Aberystwyth University, said there are a number of possibilities.

Mr Butler said: ‘I have already seen the finger of blame being pointed at foragers but I think it’s important there is no knee jerk reaction.

The medical properties of the bearded tooth mushroom

According to the US National Library of Medicine it has a long history of use as a herbal cure in Chinese medicine.

Scientists have found the fungus to be rich in components which have been shown to have anti-cancer properties.

Its compounds have also been found to alter the immune system, to reduce fat, to protect brain function and to have antioxidant properties.

A 2013 study found that H. erinaceus has also been reported to have anti-microbial, anti-hypertensive, anti-diabetic, and wound healing properties.

‘While it is possible a forager took it, maybe to eat, it’s also likely a mycologist stole it to study under a microscope.

‘Bearded tooth is one of the few protected mushrooms that is edible which means there will always be people taking them.

‘There are only a handful of them in the New Forest and if anyone is caught, of course they should be prosecuted.’

A spokesperson for the Forestry Commission said: ‘New Forest keepers and rangers will continue to ask local people and visitors not to pick fungi in the New Forest National Park and help spread the message.

‘We encourage people to get out into the forest to enjoy the signs of autumn and people must act responsibly and leave rare fungi in their natural environment.

‘This theft highlights that there are still a few people who will take rare fungi from this special place.

‘We need people to report incidents to the police, not just on social media – otherwise it won’t be dealt with appropriately.’

Last month, the Forestry Commission was criticised for putting up the signs implying that mushroom picking is completely banned in the national park.

Pickers claimed the signage was ‘misleading’ as it reads reads ‘No picking’, leading to fears well-meaning members of the public may confront foragers.

Commercial picking is against the law under the Theft Act 1968, with anything over 3.3lbs considered commercial.

Anyone with information about the theft is asked to contact police on 101. 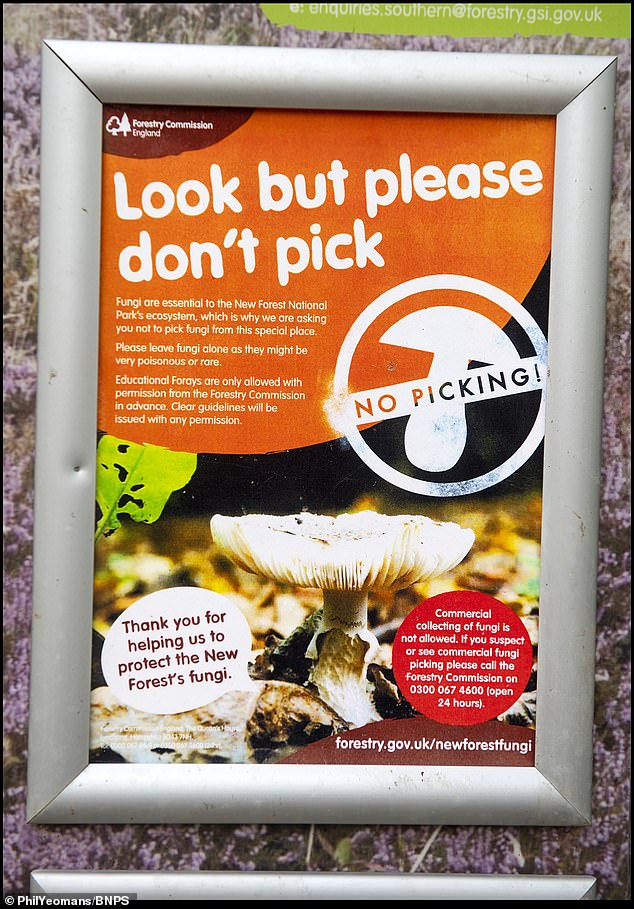 Signs erected in the New Forest have been criticised for incorrectly implying that all mushroom picking is illegal whereas in fact only commercial picking of more than 3.3lbs is outlawed – and the picking of protected species like the bearded tooth