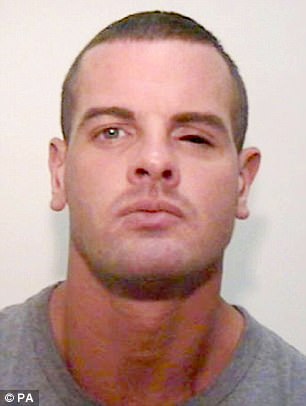 A murderous cop killer has repeatedly had his glass eye stolen by fellow prisoners who have become fed up with his constant threats.

Dale Cregan has been targeted by fellow inmates at Strangeways prison where he has threatened other inmates and staff members.

The monster has complained that he was being ‘bullied’ on his wing at tough Strangeways prison.

A source at the Manchester jail told the Daily Star newspaper that he has been ‘constantly threatening’ people.

‘For the last couple of years Cregan’s been banging on about how hard he is.

Cregan would often take out his glass eye in order to intimate people and subsequently some of the inmates on his wing got fed up with him so they waited for him to have a shower.

The source added: ‘He removes his glass eye so he can wash his face and clean out the socket.

‘Cregan placed it in a glass of warm water for 10 minutes but it was taken while he was in the shower.’

The thug ‘went ballistic’ when he thought he had mislaid the eye and was placed back in his room by staff at the prison.

‘It happened again a few days later and he hit the roof again. Everyone else thought it was hilarious, including the staff,’ the source added. 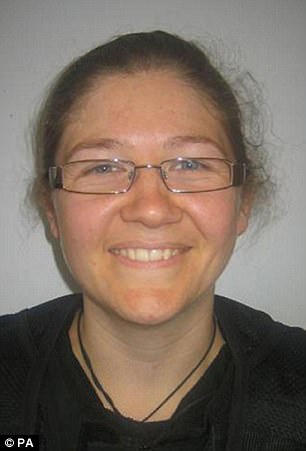 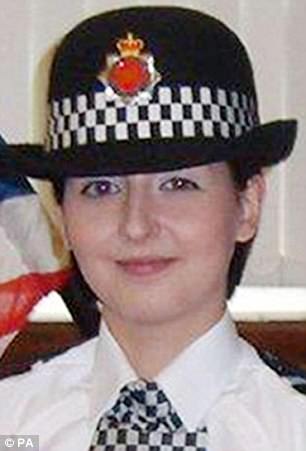 Cregan, who has since been moved from Manchester, claims he lost his eye in a punch-up with police in Thailand.

The thug had allegedly bullied other prisoners in a bid to get the names of those who stole his false eye.

The insider added: ‘After the last episode he has been fairly quiet, so if that’s what the other lags wanted then it has worked.’

Cregan, who lost an eye in a brawl years ago, was told he would die in prison when he was jailed for life without parole for shooting police officers Fiona Bone and Nicola Hughes in 2012.

He was already on the run for the murders of David Short, 46, and son Mark, 23, when he killed the two policewomen after luring them to a house with a fake 999 call before shooting them 32 times on the doorstep and then throwing a grenade at them.

Soon after being sent to prison, Cregan went on hunger strike and was sent to Ashworth Hospital in Merseyside, which was home to Moors murderer Ian Brady.

Cregan had boasted about the lax regime he enjoyed at the high security mental health facility, which included playing snooker and cooking pizza.

One-eyed Dale Cregan is currently serving a life sentence for brutally killing four people, including two policewomen, in 2012 with guns and grenades.

Cregan’s killing spree started when he murdered amateur boxer Mark Short, 23, at a pub in Droylsden, Manchester, in April.

Three other people, believed to be related to the victim, were also wounded, suffering leg and back injuries.

Nine minutes after the incident, police received reports that shots had been fired at a second property in Droylsden, where there was also a grenade blast. Nobody was injured in the incident.

Detectives said they wanted to speak to Cregan, who they had released in May after linking him to the first murder but did not have the evidence to charge him.

In September that year the killer used a fake 999 call to lure officers Fiona Bone and Nicola Hughes to a house.

When they arrived, Cregan shot them and threw an M75 grenade at them. Both officers were hit by at least eight bullets as Cregan fired 32 shots in 31 seconds.

He later handed himself in at a police station, admitting to killing the unarmed women.

The gangster admitted the attempted murder of three others in a high profile court case the following year.

During his four-month trial, which began in February 2013, Cregan was detained at Manchester Prison.

The trial was held at Preston Crown Court, where scaffolding was erected to accommodate armed officers.

Police snipers watched over the building from nearby offices and the daily convoy, carrying Cregan between Manchester and Preston, included two prison vans, police cars, motorcycle outriders and a helicopter.

In total 120 Greater Manchester Police officers were deployed daily and the total cost of the trial was estimated to be in excess of £5 million.

Cregan was convicted of all four murders and three attempted murders and was sentenced to life imprisonment with a whole life order on June 13, 2013.

He was told he would never see release after admitting to the killings which prompted public outcry and an outpouring of sympathy for the police.

His accomplice, Anthony Wilkinson, was jailed for a minimum of 35 years for his part in the gun and grenade murder of David Short.

In April 2015 he was temporarily moved to the high-security psychiatric unit Ashworth Hospital in Merseyside after going on hunger strike for a second time.

He was said to have started refusing food at the Category A jail HMP Manchester, formerly known as Strangeways, after being moved to solitary confinement.