A police officer repeatedly stabbed during a raid was left covered in blood after the horrifying attack, an eye witness said today.

The officer, 43, suffered wounds to his neck and arm following a lengthy struggle with a man at a block of flats in Portswood Road, Southampton.

Hampshire Police confirmed the officer was stabbed while calling at a house on a ‘welfare check’.

He was helped from the scene of the incident by colleagues and then taken to hospital before a man was arrested on suspicion of attempted murder. 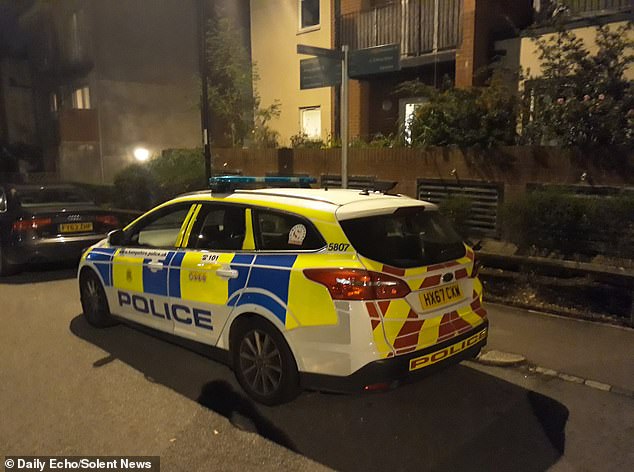 A police car is pictured last night on Portswood Road, Southampton, outside the flats where an officer was stabbed while calling at a house on a ‘welfare check’

The officer called at the house shortly after midday on Thursday when he was attacked by a 51-year-old man.

The 43-year-old officer, who has not yet been identified, suffered ‘serious but not life threatening injuries’.

‘There was a lot of blood. He looked shocked but it was hard to tell. Hopefully he isn’t too traumatised.’ 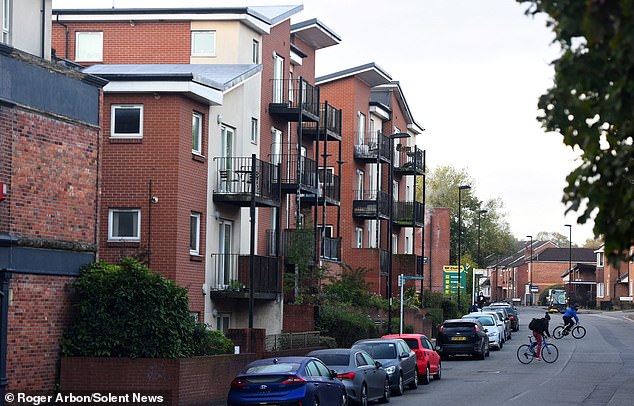 A 51-year-old man was arrested at the scene on suspicion of attempted murder.

Hampshire Police said investigations ‘into the exact circumstances of the incident’ are ongoing.

According to the witness, a team arrived equipped with a battering ram. But soon after entering the four-storey building a struggle broke out in a second-floor corridor. 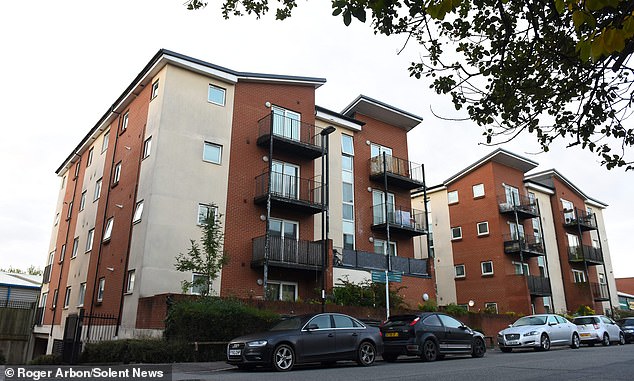 The 43-year-old officer, who has not yet been identified, suffered ‘serious but not life threatening injuries’ at the address, pictured above, yesterday

The man, who lives opposite and watched from his window, said: ‘I saw a few officers go in and I assumed it was some sort of raid because they were carrying a battering ram, but they were quite relaxed. There wasn’t really any tension.

‘I saw that there was nothing for a few minutes but I can see into the corridor of that flat from my building.

‘I could see there was some sort of wrestling going on and they were trying to restrain someone who was fighting back.’

The witness then saw the blood-spattered policeman leaving the building, before he was taken away in an ambulance.

He added: ‘After that it took a while to get the attacker out. It must have been around half an hour or so before they got him out. 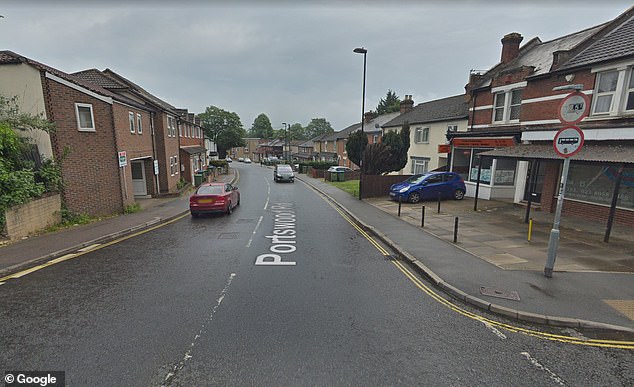 Portswood Road in Southampton, pictured. A 51-year-old man was arrested at the scene on suspicion of attempted murder and police say investigations are ongoing

‘When he didn’t come out for so long I thought “has someone been murdered? why are they not coming out”.

‘I think they were trying to calm the attacker down. By the time he was outside he seemed calm. One of the officers must have been able to calm him down.

‘The police told me there was a lot of noise and that was why they had been called.’

Peter Crawford, 66, who lives nearby, was getting off a bus when he saw the injured officer being put in an ambulance.

He said: ‘He was conscious and he was sitting on the pavement next to an ambulance. He was having his arm bandaged up. Then they put him in an ambulance and took him away.’

The officer’s family has been informed and are being supported by specialist officers.

The force also stated on Thursday night that the suspect remained in custody.

Detective Chief Inspector Dave Brown said: ‘Our thoughts are very much with the officer and his family at this time.

‘We have a man in custody arrested on suspicion of attempted murder and we progressing the investigation, carrying out enquiries, conducting house to house visits and scoping CCTV opportunities.

‘At the same time, we are providing support to the officer’s family and his colleagues following this incident.

‘I would like to reassure you that there we do not believe there is any wider risk to the public.