‘If you can’t handle your drink stay at home’: Police urge England fans not to behave like ‘idiots’ as footage emerges of a topless man celebrating the team’s success jumping across the ROOFS of moving buses

Police have urged England fans not to behave like ‘idiots’ after one football fan was spotted jumping across the roofs of moving buses.

In the clip, filmed in Southampton on Saturday following England’s 2-0 quarter final victory over Sweden, a topless man can be seen stood on top of a single decker bus.

He jumps between two buses before one starts to pull away – leading to shouts from a woman behind the camera telling him to jump on top of a nearby police van. 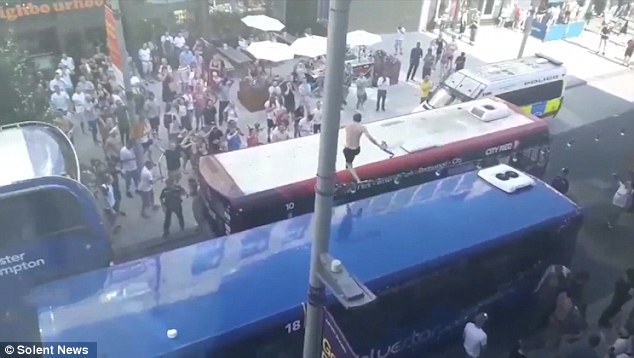 In the clip, filmed in Southampton on Saturday following England’s 2-0 quarter final victory over Sweden, the topless man can be seen jumping between buses 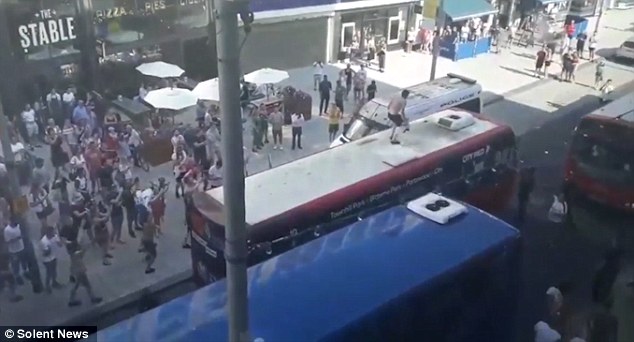 He manages to stay upright on top of the bus as it pulls away, with a second clip showing him back on a smaller bus waving around a giant England flag.

The fan can even be seen dancing while supporters cheer him on as frustrated police officers attempt to get him to come down.

After several minutes entertaining the crowd with his antics he came down and ran past a waiting police van.

Now police are urging people to behave and not be ‘idiots’ ahead of England’s World Cup semi final against Croatia tomorrow.

John Apter, chairman of Hampshire Police Federation, said: ‘It’s good that we are all behind the England team and celebrate their wins.

‘Policing is already under pressure with officers struggling to cope with the demand we are facing. 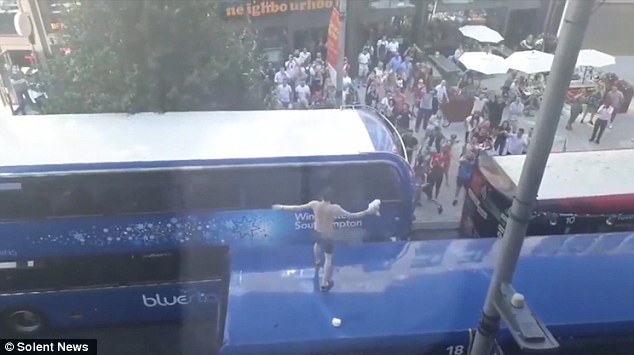 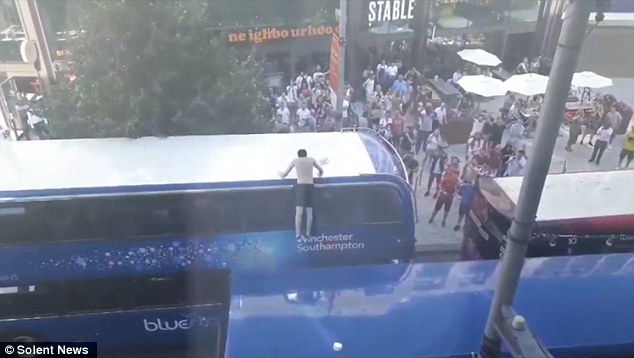 Police have urged England fans not to behave like ‘idiots’ after the footage emerged, saying emergency services are already ‘busy enough’ without added problems

‘When good-natured celebrations turn into violence, stupidity and recklessness it adds pressure on all the emergency services.

‘I would ask that those who can’t handle their drink, or are intent on causing trouble to stay at home.

‘My colleagues in the emergency services are busy enough without having to deal with idiots.’

Bus companies First and Unilink have also said they will not tolerate similar behaviour.

A Hampshire Constabulary spokesman said: ‘Officers on patrol in Southampton City Centre following England’s World Cup Quarter Final victory were made aware of some people climbing on top of buses.

‘These men were asked to come down and they did. Officers spoke to those involved and advice was given.

‘No one was injured and no damaged was caused.’

Chief Inspector Darren Miller said: ‘We know that emotions can run high following football matches and we want everyone to be able to enjoy themselves safely, so we would like to remind people to not put themselves or anyone else at risk.’

He added: ‘We do not want celebrations ending with anyone getting hurt.’