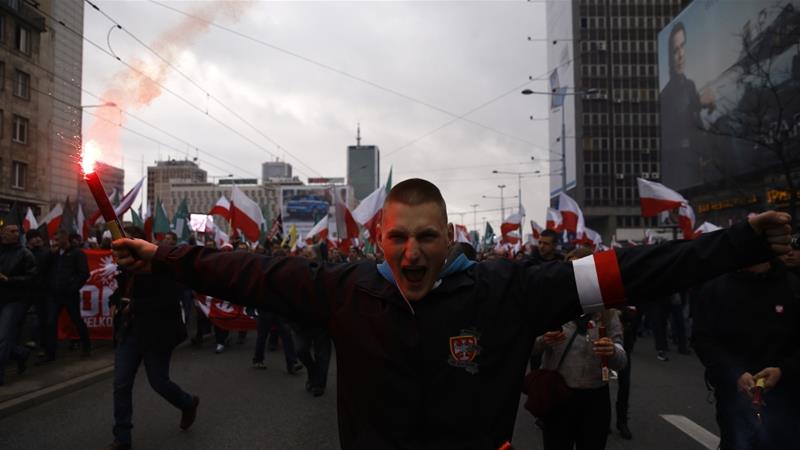 Warsaw – Representatives from the Polish government of President Andrzej Duda and Prime Minister Mateusz Morawiecki are set to hold a joint march with far-right groups on Sunday to celebrate the centenary of the restoration of Poland’s independence.

The procession, which will start at 2pm local time, will mark the first time Polish officials will attend the “Independence March” – an event that has in the past featured racist, anti-immigrant, homophobic and white supremacist slogans.

Organised annually since 2010 by the far-right National Radical Camp, All-Polish Youth and the National Movement, chants at previous events have included: “The whole Poland sings with us: F*** off with the refugees”, “Not red, not rainbow but national Poland”, “One nation across the borders”, and “F*** Antifa”.

Sunday’s march, which was announced late on Friday had followed days of legal-wrangling and triggered widespread unrest in the Eastern European nation.

On Wednesday, Warsaw’s mayor Hanna Gronkiewicz-Waltz, had banned the Independence March due to security concerns, stating “Warsaw has already suffered enough due to aggressive nationalism.”

The Independence March association later appealed the mayor’s decision and on Thursday, the district court revoked the ban.

This meant that the Independence day commemoration would see two concurring marches organised along the same route and time, which pushed the government to the negotiating table with the far right.

And on Saturday, two conferences which were set to feature speeches by nationalists from across Europe were cancelled after Poland’s domestic counterintelligence agency, the Internal Security Agency, arrested more than 100 people, according to the nationalists. Al Jazeera was unable to independently verify the number detained.

A closed concert of far-right bands, including Legion Twierdzy Wroclaw and the Swedish Code 291, both known for hateful lyrics and fascination with fascism, was also cancelled.

Damian Kita, spokesman for the march, told Al Jazeera on Tuesday that around 250,000 people were expected to attend, and claimed that this year’s event would be peaceful.

“Because of this special anniversary, the 100th anniversary of regaining independence by Poland, we wanted to close this passing century under the slogan ‘God, honour, homeland’,” he said.

“We decided that no other slogan would better summarise the Polish fight for freedom.”

Kita also said that radical nationalist groups which formed the Black Block at last year’s Independence March, and held banners including: “Europe will be white or uninhabited”, would not be accepted during the march.

These groups, including Szturmowcy (Stormtroopers), a neo-pagan Niklot movement and Autonomous Nationalists, announced that they are planning to attend the march despite the conflict with the organisers.

Rafal Pankowski, a sociologist from Collegium Civitas and a cofounder of the anti-racist Never Again association, said the cooperation between the government and far-right groups was concerning.

He added that arrests did not guarantee that the march would pass without racist slogans.

“The cooperation between state institutions and extremists from the National Radical Camp is a legitimisation of a dangerous, extreme nationalist ideology and a reflection of a crisis of democracy,” he said.