EXCLUSIVE: Almost half of Brits have no idea how to get access to a coronavirus test if they needed one, according to new poll which suggests ministers are STILL struggling to boost awareness of UK’s testing programme

Almost half of Britons do not know how to access a Government coronavirus test, according to a new poll which suggests ministers are still struggling to make people aware of the UK’s testing programme.

The Government wants everyone who develops coronavirus symptoms to get tested as soon as possible to stop the spread of the disease.

But a survey conducted by Redfield & Wilton Strategies for MailOnline revealed that 44 per cent of the nation do not know how or where to obtain a test if they needed one. Some 56 per cent said they did know how to get tested.

The poll of 2,000 people carried out on July 29 also found the overwhelming majority of respondents remain committed to stopping the spread of coronavirus, despite fears of lockdown fatigue.

Just shy of nine in 10 people (89 per cent) agreed they have a personal responsibility to reduce the rate of infection.

Some 84 per cent said they believed the actions they had taken during the pandemic had helped prevent the spread of the disease.

Just over half (52 per cent) said they feel a greater sense of community due to the pandemic. 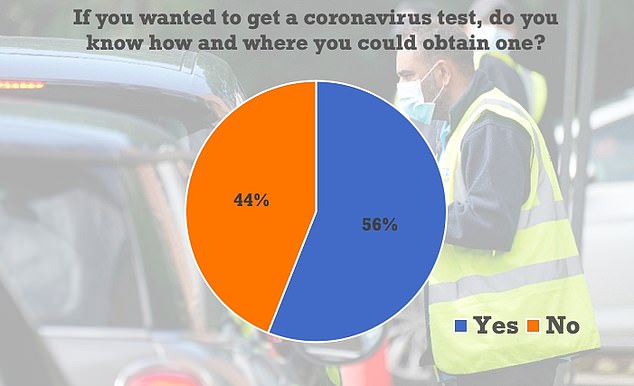 The Redfield & Wilton Strategies survey is likely to cause major concern within the Government because it highlights an apparent lack of awareness of the UK’s testing regime.

NHS Test and Trace is viewed by ministers as the key to stopping a second wave of coronavirus.

Anyone who develops the symptoms – a persistent cough, a fever or a loss of smell or taste – is encouraged to self-isolate and get tested.

Those who test positive are then required to hand over the contact details of anyone they have come into close contact. Those people are then contacted and told to self-isolate and get tested.

The Government yesterday announced it is launching a new NHS Test and Trace public health campaign in a desperate bid to improve the system after it emerged that one third of contacts are still being missed.

A TV advert was broadcast last night telling Britons that if they test positive for Covid-19, they must hand over details of people they have come into contact with.

Meanwhile, restaurants, pubs, salons and gyms will now be supported by contact tracers to log their customers’ details so they can be contacted more easily.

Figures released yesterday showed in the week of July 16-22, some 4,242 people infected with coronavirus in England were referred to the programme.

But just 2,809 (77 per cent) agreed to provide details of people they had come into close contact with recently, meaning thousands of potentially infected people went un-contacted.

A total of 646 with the virus could not be reached at all by the tracers, who phone, text and email someone up to 10 times a day to get hold of them.

As part of the new public health blitz, the NHS will now encourage everyone to get a free test as soon as they get symptoms — previously the advice was to only apply for a swab if you had ‘persistent flu-like symptoms’.

Ministers have also pledged to increase the UK’s coronavirus testing capacity to 500,000 per day before winter, amid fears thousands of people with coughs and colds caused by other infections will take up most of the space.