Voters still prefer the Tories to Labour despite despite Theresa May’s Brexit deal woes, according to a poll today.

Some 40 per cent back the Conservatives while 35 per cent favour Jeremy Corbyn’s party, according to the latest YouGov research.

In a glimmer of hope for Mrs May, support for her Brexit deal also seems to be growing, with 27 per cent endorsing it – up from 15 per cent a fortnight ago.

The findings, in a survey for The Times, emerged as the PM warned that her plan is the only option that ‘delivers on the referendum’.

But her prospects in a crunch Commons vote on December 11 are looking increasingly dire after the list of critics on her own benches hit three figures. 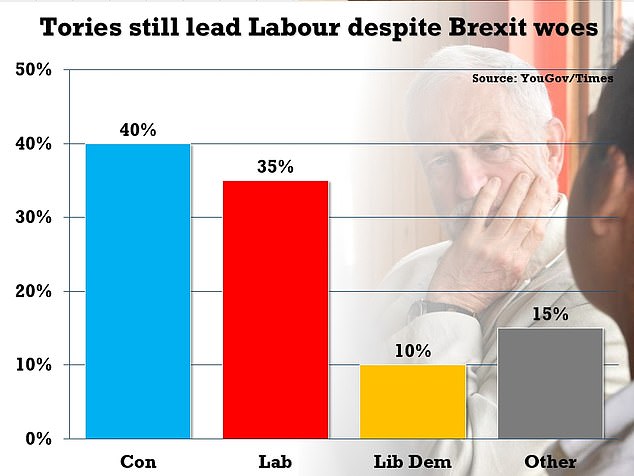 Some 40 per cent back the Conservatives while 35 per cent favour Jeremy Corbyn’s party, according to the latestYouGov research

The grim threshold was reached despite Cabinet Eurosceptic Liam Fox urging Conservatives to do their ‘duty’ and back the plan – insisting the premier’s gruelling PR drive is ‘changing the public mood’.

Dr Fox said the choice facing MPs was ‘stark’, suggesting killing off the deal could lead to the referendum result being ‘stolen’ by Remainers.

But with Labour, the SNP and Lib Dems all joining the Tory rebels in opposition to the deal Mrs May appears to be on track for a catastrophic defeat in the looming showdown.

One anxious minister said the stand-off between Mrs May and Eurosceptics, who are demanding she renegotiates with the EU, ‘feels like a game of chicken’.

The YouGov poll shows support for the deal has risen from just 15 per cent two weeks ago, with 51 per cent opposed.

But the research conducted on Wednesday and yesterday shows 27 per cent backed it, with 45 per cent opposed.

Asked to choose between Mrs May’s deal and no deal, 42 per cent wanted MPs to back the prime minister’s package, with 32 per cent who thought it should be rejected.

As well as the Tories leading on headline voting intention, Mrs May is still well ahead of Mr Corbyn when it comes to who makes the best PM.

She was chosen by 36 per cent, while just 23 per cent plumped for the Labour leader.

They were both outpolled by ‘don’t know’ – which was selected by 38 per cent. 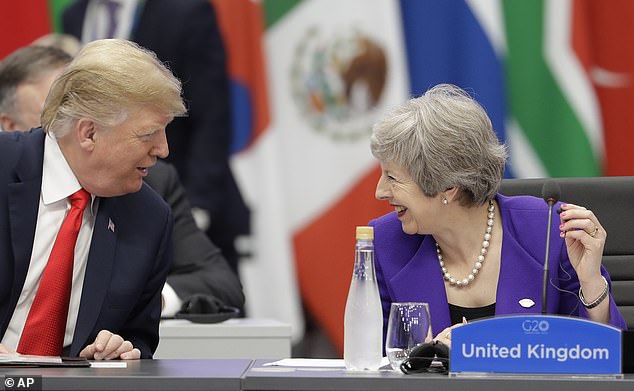 In a glimmer of hope for Mrs May (pictured right with Donald Trump today), support for her Brexit deal also seems to be growing, with 27 per cent endorsing it – up from 15 per cent a fortnight ago