A dog whose nose was blown off when firecrackers were attached to his mouth has made a remarkable recovery after vets reconstructed his jaw.

One-year-old Braveheart underwent four surgeries after being found by an animal rescue charity in Sonora, Mexico.

When he was well enough to travel, the adorable canine was sent to The Saving Huey Foundation in California, U.S., to live at their sanctuary.

The charity, which is ran by Tracy Lystra, 44, agreed to pay for Braveheart’s recovery and said that the pooch is now happy and loves playing with his rescue pup friends. 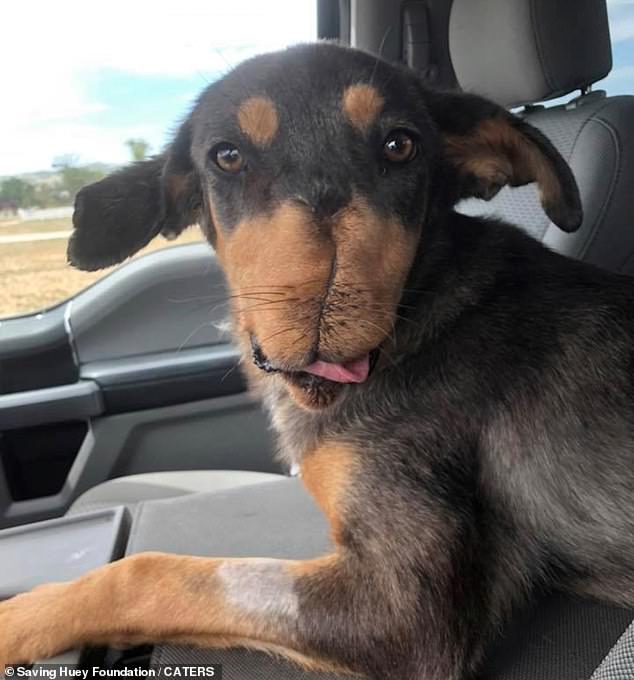 Adorable dog Braveheart, pictured now, had his jaw reconstructed after it was blown to pieces by firecrackers in Sonora, Mexico 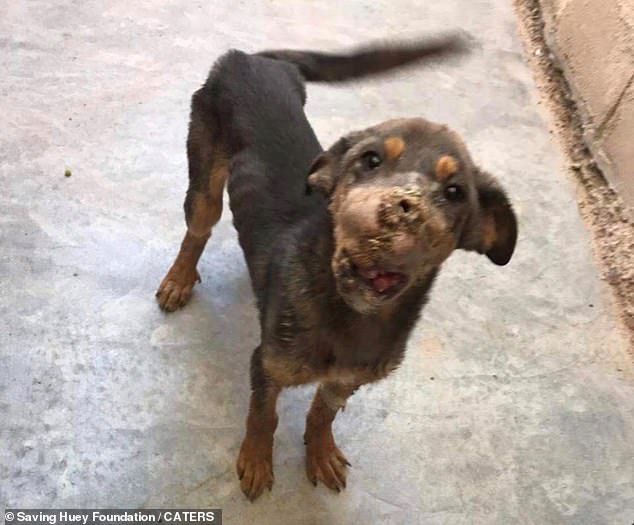 The pup, pictured recovering after surgery, had four operations to rebuild his face in Mexico

Ms Lystra explained how the damage done to Braveheart was so severe that his jaw was blown to pieces and a prosthetic one had to be made.

She said: ‘I was contacted by someone in Mexico about Braveheart, they sent me a picture of him and my first instinct was to have the poor dog put down.

‘I had never done any rescue in that area so was unsure of the vets out there but a friend told me about Dr.Briseno, who thought he could help.

‘A new jaw was made for Braveheart, and he has four surgeries to rebuild his jaw.

‘He ended up staying at the practice in Mexico for two months until he was healthy enough to make the 11-hour drive to us, he has been with us for two months now.

‘Shortly after coming to us he had the tube removed from his nose and this seemed to alleviate a lot of discomforts. 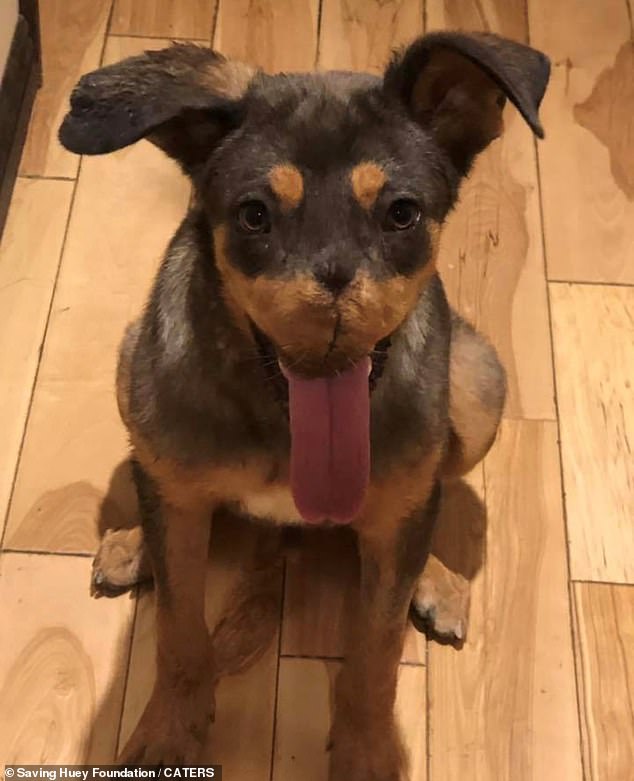 Braveheart, pictured, now lives at The Saving Huey Foundation in California where he loves to play with his fellow rescue pup friends 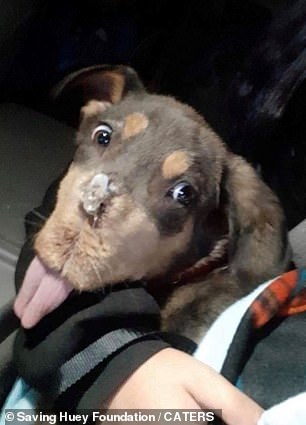 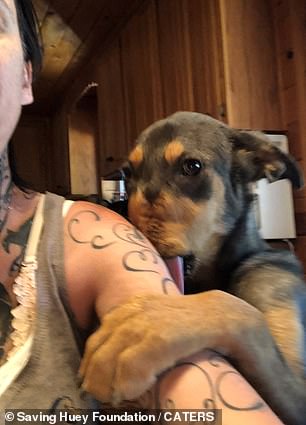 Braveheart, pictured left and right after the surgery, had to stay in Mexico for two months before he was well enough to travel to the animal sanctuary 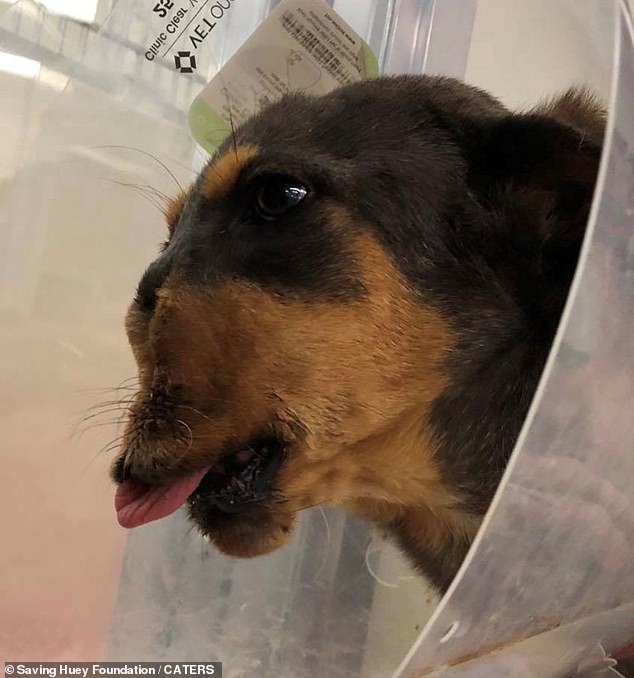 Not much is known about Braveheart’s past as he was found by an animal charity after being injured. The dog is pictured healing from surgery with a cone around his neck

‘Vets here had no idea what it was, and we nearly lost him but he has made a remarkable recovery.’

Braveheart was found earlier this year, but it has been unclear as to what exactly caused the damage.

Tracy said: ‘I do not know much about Braveheart’s past, as is the case with the majority of our cases.

‘In Braveheart’s case his surgeon in Mexico as well as the hospital staff here in the U.S. agree that it appears as if he had explosives put in his mouth.

‘Because of the damage it is believed that the explosive was more than likely a firecracker.’

Ms Lystra said that Braveheart is recovering very well and is a happy dog at her charity’s sanctuary. 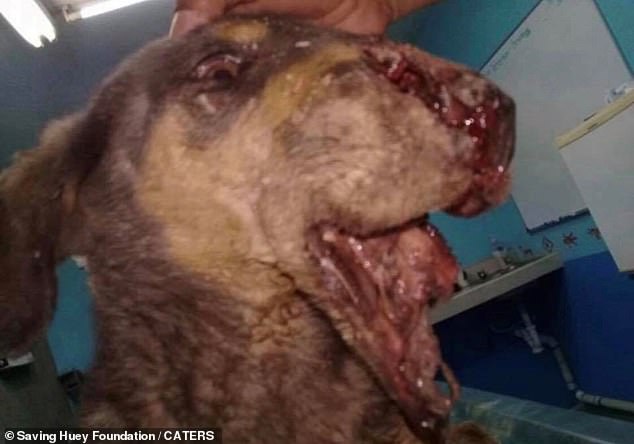 The firecracker destroyed Braveheart’s jaw, pictured, and he needed a prosthetic one built 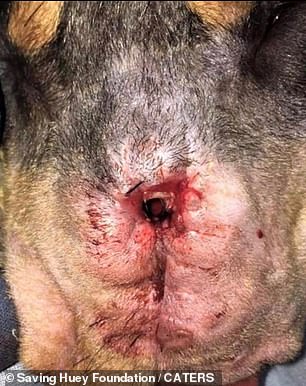 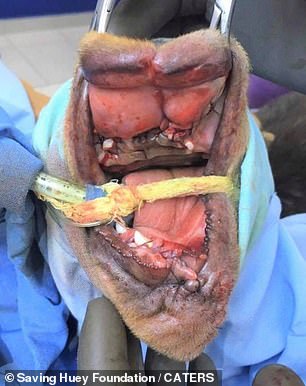 After recovering from his surgeries Braveheart, pictured left and right during the operations, was driven 11 hours to California to start a new life 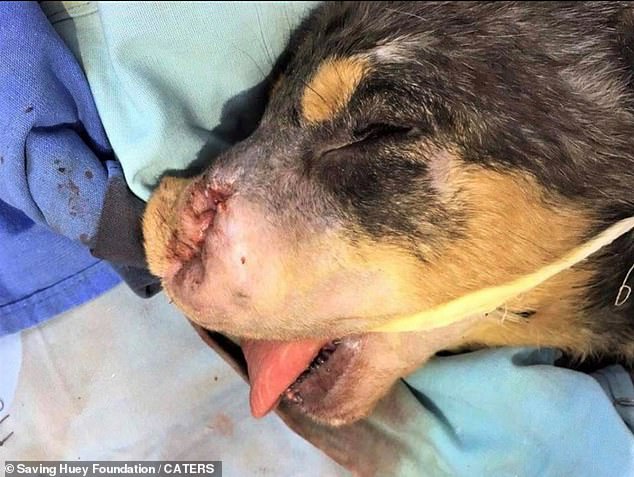 Charity head Tracy Lystra, 44, said her first ‘instinct was to have the poor dog put down’ when she was sent a photograph of Braveheart, pictured during surgery, from a colleague Mexico 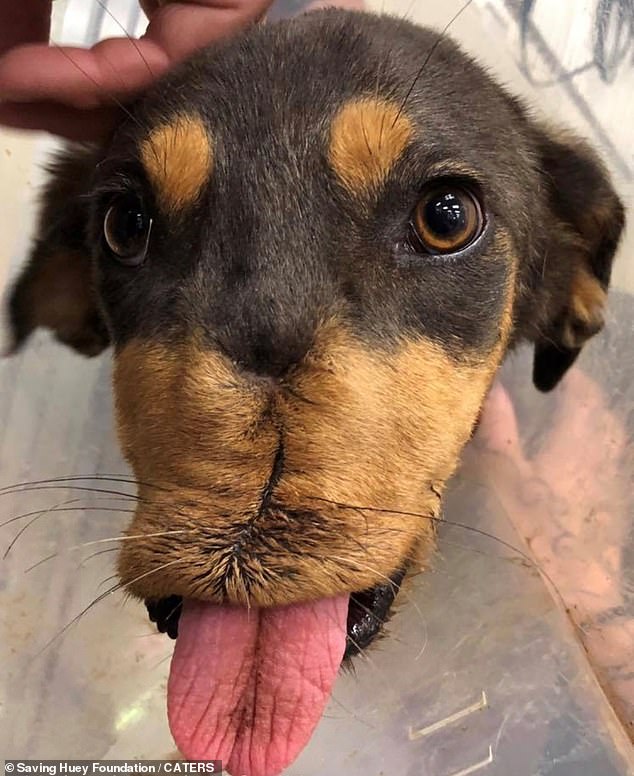 Braveheart, pictured now his face has healed, is now a happy and friendly pooch at the Saving Huey Foundation and is learning not to jump at people when he gets excited

She said: ‘Braveheart is an amazing boy who loves people and other animals, he still gets a little too excited when he meets new friends but he’s learning not to jump.

‘I would be lying if I said that late at night, I didn’t have awful thoughts as to what I would do to the people who commit such crimes.

‘I am able to take a lot of what I see and hide it from my emotions, but there are times it definitely catches up with me.’

Ms Lystra added: ‘Many people see an animal in pain and either turn a blind eye to it or want to end the animals’ life.

‘While Saving Huey Foundation does not condone suffering, we do want to offer second chances to the lives that can sustain such an offering.’ 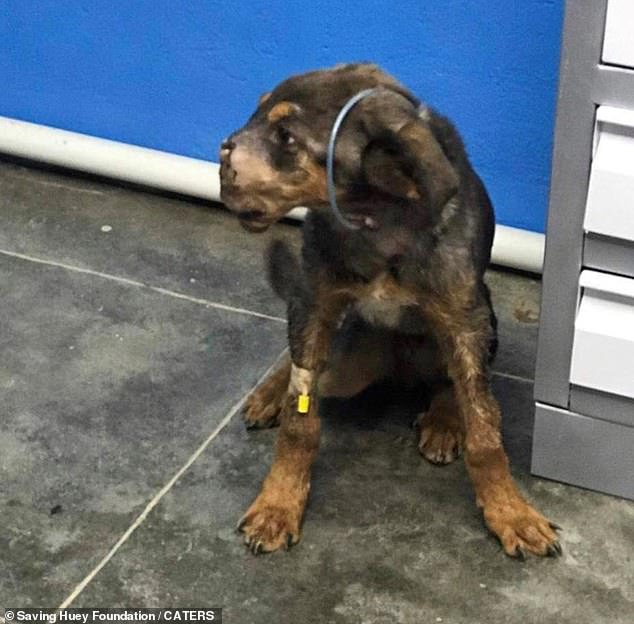 Braveheart, pictured after surgery, had a tube removed from his nose shortly after arriving in California which Ms Lystra said made him more comfortable 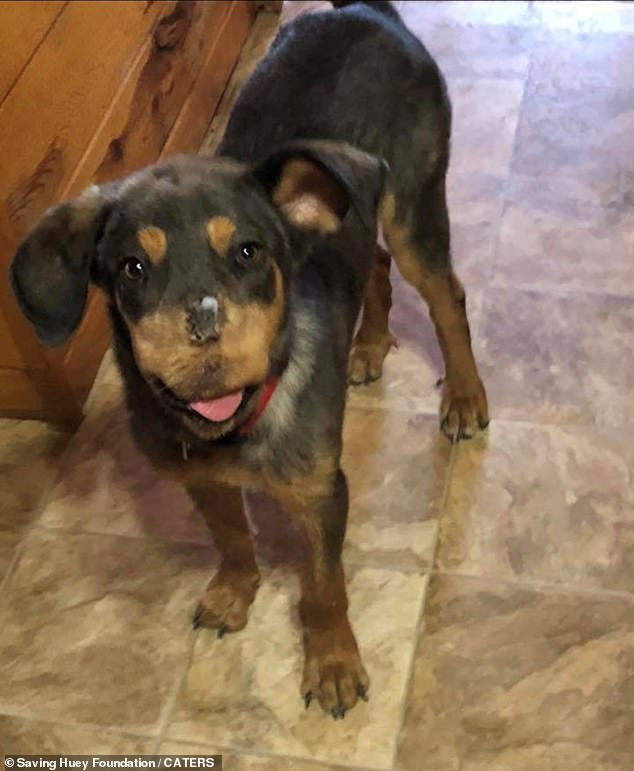