Pope accuses his critics of ‘stabbing me in the back’

Pope Francis has accused his critics of stabbing him in the back after he was branded a ‘heretic’ by a small faction of hard-line US conservatives.

Francis said he welcomed ‘loyal’ criticism that helps the church grow, but denounced those who have taken issue with his outreach to gay and divorced people, his concern for the poor, the environment, and migrants.

‘At least those who say something have the advantage of honesty in saying so. And I like that,’ he said.

‘I don’t like criticism when it’s under the table, when they smile at you and then then they try to stab you in the back. That isn’t loyal. That isn’t human,’ Francis said. 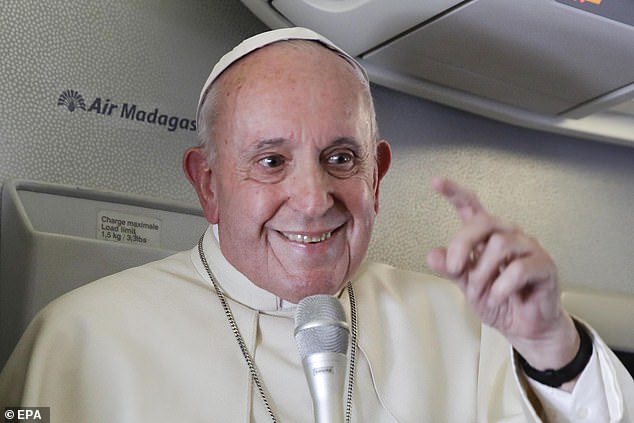 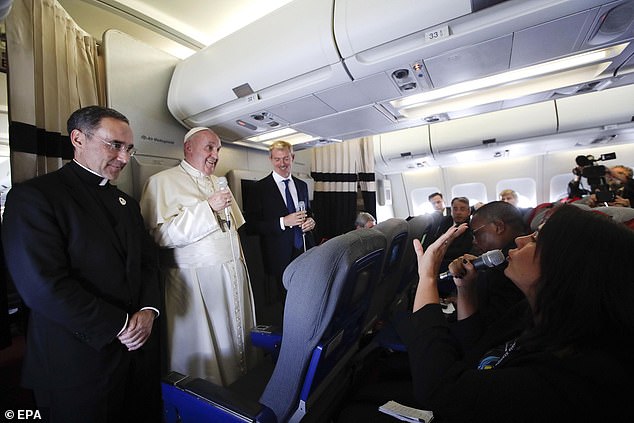 Francis said he welcomes ‘loyal’ criticism that helps the church grow, but hit out at those who ‘smile at you and then then they try to stab you in the back’

The pontiff also attempted to turn the tables on his detractors, saying that those who teach strict moral codes are often trying to hide their own moral failings.

The pope spoke to journalists while flying home from Africa – a week after he was presented with a book detailing his critics’ objections on the flight out.

The book, ‘How America Wants to Change the Pope,’ documents growing criticism of Francis by a small wing of U.S. Catholics who question many of his positions.

Some have gone so far as to accuse Francis of heresy and warned of the risk of schism, or a formal separation from the Holy See.

In response, Francis said ‘I pray that there aren’t any [schisms] because the spiritual health of so many people is at stake.

‘Let there be dialogue, correction if there is some error. But the path of the schismatic is not Christian.

‘I pray there are no schisms, but I’m not afraid of them.’

He added that ideologically driven critics don’t really want a response but merely to ‘throw stones and then hide their hand.’

Francis’ comments are likely to inflame a heated debate roiling the Catholic Church in the United States and elsewhere.

The pope’s mercy-over-morals emphasis irks some doctrine-minded Catholics who came of age during the conservative papacies of St. John Paul II and Benedict XVI.

Francis’ allies, including German Cardinal Walter Kaper and the head of Francis’ Jesuit order, have said the conservative criticism amounts to a ‘plot’ to force the first Jesuit pope to resign so a conservative would take his place. 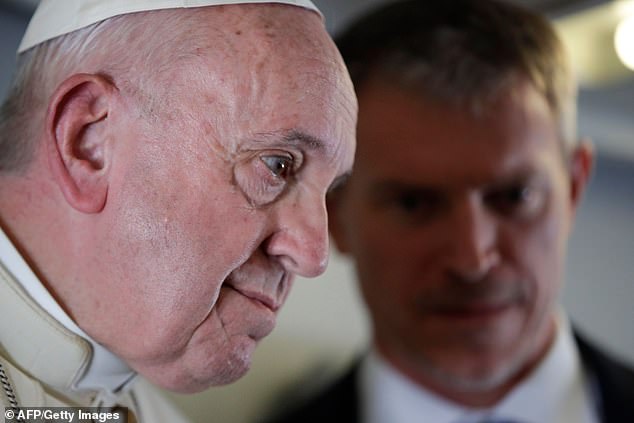 Speaking about a threat from the hard-liners to break off from the church, Francis said he prayed there was no schism but was not afraid of it either 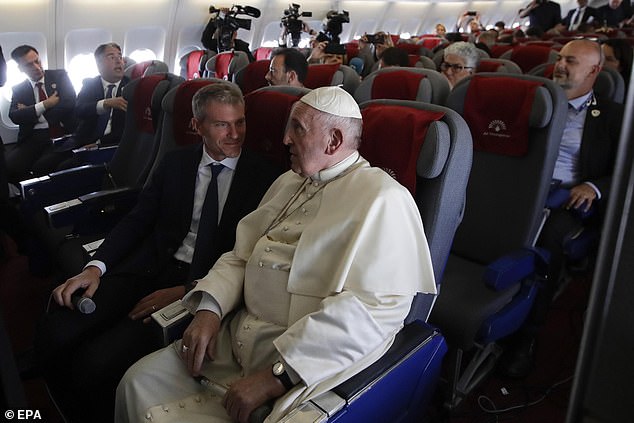 Francis spoke on a return flight from Africa. On the outbound trip, a journalist had presented him with a copy of a book detailing criticisms from the US

Asked about the criticism and risk of schism, Francis insisted his social teachings were identical to those of St. John Paul II, the standard-bearer for many conservative Catholics.

And he noted that church history is full of schisms, most recently after the Second Vatican Council, the 1960s church meetings that modernized the church.

A group of traditionalist Catholics led by French Archbishop Marcel Lefebvre rejected the reforms and grew into what Francis said was the ‘most well-known’ of recent church schisms.

Francis said all schismatics share a common trait: They allow ideology to become ‘detached’ from Catholic doctrine and distance themselves from the faith of ordinary Catholics.

‘When doctrine slips into ideology, there’s the possibility of schism,’ he warned.

He lamented that many bishops and priests were already engaged in a ‘pseudo-schism’ but said ideas won’t survive.

He claimed doctrinal rigidity, or ‘moral asceticism,’ masked their own personal problems.

While he did not expand on the statement, it was perhaps a reference to how some of the church’s most notorious sexual predators – including the late Legion of Christ leader, Rev. Marciel Maciel – preached a highly conservative brand of sexual morals.

‘You’ll see that behind rigid Christians, bishops and priests there are problems,’ Francis said, adding that such rigidity showed a lack of a healthy understanding of the Gospel.

‘We have to be meek with these people who are tempted to attack (because) behind them there are problems and we have to accompany them with meekness.’

Opposition to Francis in the U.S. reached a fever pitch in the last year following the publication of accusations by a former Vatican ambassador to the U.S. that Francis, and before him a long list of Vatican and U.S. prelates, turned a blind eye to the sexual misconduct of ex-Cardinal Theodore McCarrick.