Vatican City: Recalling Jesus’ birth in a stable, Pope Francis rebuked those “ravenous” for wealth and power at the expense of the vulnerable, including children, in a Christmas Eve homily decrying war, poverty and greedy consumerism.

In the splendour of St Peter’s Basilica, Francis presided over the evening Mass attended by about 7000 faithful, including tourists and pilgrims, who flocked to the church on a warm evening and took their place behind rows of white-robed pontiffs.

Francis drew lessons from the humility of Jesus’ first hours of life in a manger. 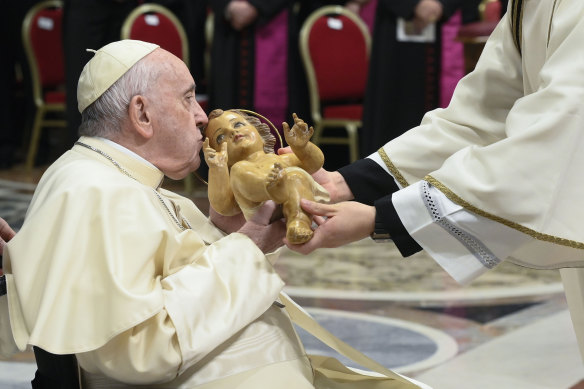 Pope Francis kisses a statue of Baby Jesus as he presides over Christmas Eve Mass in St Peter’s Basilica at the Vatican on Saturday.Credit:Vatican Media/AP

“While animals feed in their stalls, men and women in our world, in their hunger for wealth and power, consume even their neighbours, their brothers and sisters,” the pontiff lamented. “How many wars have we seen! And in how many places, even today, are human dignity and freedom treated with contempt!”

“As always, the principal victims of this human greed are the weak and the vulnerable,” said Francis, who didn’t cite any specific conflict or situation.

“This Christmas, too, as in the case of Jesus, a world ravenous for money, power and pleasure does not make room for the little ones, for the so many unborn, poor and forgotten children,” the pope said, reading his homily with a voice that sounded tired and almost hoarse. “I think above all of the children devoured by war, poverty and injustice.” 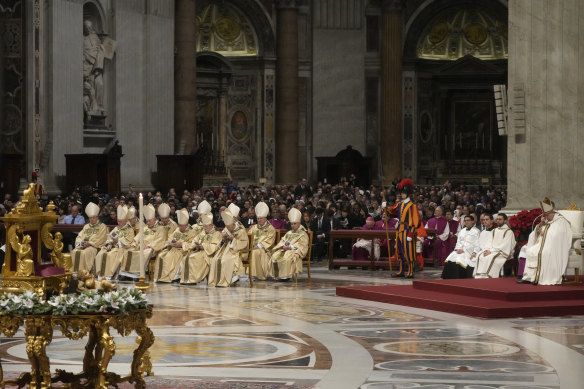 Christmas Eve Mass, at St Peter’s Basilica at the Vatican on Saturday.Credit:AP

“Do not allow yourself to be overcome by fear, resignation or discouragement.” Jesus’ lying in a manger shows where “the true riches in life are to be found: not in money and power, but in relationships and persons”.

Remarking on the “so much consumerism that has packaged the mystery” of Christmas, Francis said there was a danger the day’s meaning could be forgotten.

But, he said, Christmas focuses attention on “the problem of our humanity – the indifference produced by the greedy rush to possess and consume”.

“Jesus was born poor, lived poor and died poor,” Francis said. “He did not so much talk about poverty as live it, to the very end, for our sake.”

Francis urged people to “not let this Christmas pass without doing something good”.

When the Mass ended, the pope, pushed in a wheelchair by an aide, moved down the basilica with a life-sized statue of Baby Jesus on his lap and flanked by several children carrying bouquets. The statue then was placed in a manger in a crèche scene in the basilica.

Francis, 86, has been using a wheelchair to navigate long distances due to a painful knee ligament, and a cane for shorter distances.

Traditionally, Catholics mark Christmas Eve by attending Mass at midnight. But over the years, the starting time at the Vatican has crept earlier, reflecting the health or stamina of popes and then the pandemic.

Two years ago, the start of Christmas Eve Mass in St Peter’s Basilica was moved up to 7.30pm to allow faithful to get home before for a nighttime curfew imposed by the Italian government as a measure to combat the COVID-19 pandemic. Although virtually all pandemic-triggered restrictions have long been lifted in Italy, the Vatican kept to the early start time.

During Saturday evening’s service, a choir sang hymns. Clusters of potted red poinsettia plants near the altar contrasted with the cream-coloured vestments of the pontiff.

On Sunday, tens of thousands of Romans, tourists and pilgrims were expected to crowd into St Peter’s Square to hear Pope Francis deliver an address on world issues and give his blessing. The speech, known in Latin as “Urbi et Orbi” (to the city and to the world), generally is an occasion to review crises including war, persecution and hunger, in many parts of the globe.