Christian Porter and the ABC are at loggerheads over the public release of the broadcaster’s written defence to his defamation claim, with the Federal Court being asked to step in to resolve the fight.

The ABC’s hotly-anticipated defence to Mr Porter’s defamation claim was filed in the Federal Court on Tuesday night but has yet to be released publicly.

On Thursday, Mr Porter’s lawyers filed an application seeking a temporary court order that three schedules to the defence “are to be treated as confidential” and not distributed to third parties. 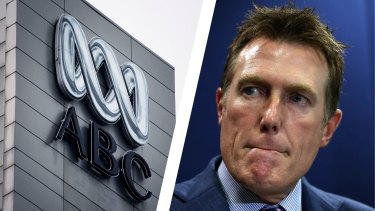 Attorney-General Christian Porter is suing the ABC for defamation.

Ultimately, Mr Porter is seeking a court order that the schedules to the defence and one paragraph be struck out, and the schedules removed from the court file. His lawyers are relying on a section of the Federal Court rules dealing with “scandalous material” or material that is “otherwise an abuse of the process of the court”.

Mr Porter, who was then attorney-general and is now the Minister for Industry, Science and Technology, is suing the ABC and journalist Louise Milligan for defamation over a February 26 online article headlined “Scott Morrison, senators and AFP told of historical rape allegation against Cabinet Minister”.

He was not named in the article but alleges he was widely identified as the subject, including on social media.

A person may be identified indirectly by an allegedly defamatory article when details in an article allow a reader to piece together their identity. Mr Porter’s lawyers – Sydney silks Bret Walker, SC, and Sue Chrysanthou, SC, and solicitor Rebekah Giles – must prove at least one person reasonably understood the article referred to him.

Mr Porter claims the article defamed him in a number of ways, including by suggesting he “brutally raped a 16-year-old girl in 1988”, when he was 17, and this contributed to her taking her own life last year, after she told NSW Police she did not wish to pursue her complaint. He strenuously denies the claims.

He says the article also suggested there were “reasonable grounds” for suspecting him of the crime, and for suspecting the alleged crime contributed to the woman taking her own life.

In a statement in March, NSW Police said there was “insufficient admissible evidence to proceed” with an investigation in the matter.

The ABC is defending the lawsuit but the nature of its defence will not be clear until the court releases its defence, wholly or in part.

A central issue in the proceedings will be whether the online article conveys the allegedly defamatory meanings claimed by Mr Porter. The court is the final arbiter of what a publication says, and in many cases this issue is not resolved until the end of the trial. This has significant time and cost consequences.

In the application filed on Thursday, Mr Porter’s lawyers ask for these questions of meaning to be “determined separately to and in advance of any other question of liability”.

This has the potential to resolve the proceedings more quickly because the ABC would only have to defend the meanings the court finds were conveyed by the article, rather than seeking to marshal defences to all the potential meanings.

The parties will appear before Justice Jayne Jagot on Friday.