On one thing, President Trump is clearly right. He has better credentials for the Nobel Peace Prize than President Obama did when he got it.

When the 44th president won it in 2009, he had been in office for barely nine months. His main achievement seemed to be that he wasn't the 43rd president, George W. Bush. 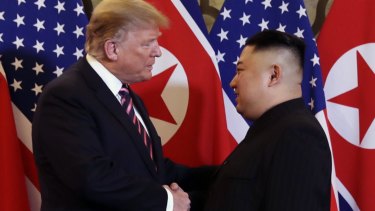 So you can sympathise with Mr Trump when he said, “They gave it to Obama. He didn’t even know what he got it for. He was there for about 15 seconds and he got the Nobel Prize. He said, ‘Oh, what did I get it for?’”

Mr Trump added, "With me, I probably will never get it."

The 45th president may be wrong.

Whatever the glitches and bumps in the summit in Vietnam, a huge change has already come over one of the most dangerous places on earth. A process has already started in Korea.

There is now a real chance of peace on the Korean peninsula, the two halves of which have been in a state of highly armed, bellicosity for seven decades.

Change has already come in Korea – a change of direction from "no-compromise; no way, no how" to "let's work out how we can live together".

You can argue that President Trump has blundered into giving away what Obama refused to by tacitly accepting a nuclear-armed North Korea, at least in the short term.

You may think that Mr Trump's ego got the better of him, but the reality is the likely outcome is an opening of North Korea to outside influences.

Kim Jong-un now seems to believe that he can energise the miserable North Korean economy and still keep control, just like the Vietnamese and Chinese communist parties have done in their countries.

But there is a big difference. Vietnam is a unified country. The north won the war and the victor's rule is now untrammeled from the tip to the Chinese border.

In contrast, it's hard to think of any two neighbouring countries that have such a big gap in living standards as do North and South Korea.

The two capitals are less than 200 kilometres from each other. In Pyongyang, lighting is scarce and when rice harvests fail, food is scarce – in the countryside even more so.

Seoul, in contrast, is a vast teeming metropolis where people stream video of the breakfast shows live on their phones as they go to work on the swishest underground on the planet.

Just look at the classic map from space, showing North Korea at night as a land of darkness and South Korea beaming with bright light.

Can the North Korean regime keep a grip on its people – and have no doubt it's been an iron grip – once the light from the rest of the world gets in?

When East Germany fell, one of the big factors was that all but the very east of the communist country, the area around Dresden, could get West German television. One East German friend told me she would get a glimpse of the outside world every day and she just wanted to experience it.

"We were sick of going to Lake Balaton in Hungary for our holidays every year," was the way she put it. "We wanted to go to Spain."

Can the North Korean regime keep a grip on its people once the light from the rest of the world gets in?

Maybe Mr Kim's ego has carried him away, too. Maybe the mutual massaging has clouded both leaders' judgements – to the benefit of the rest of us.

Despite the rhetoric, few experts believe North Korea will give up nuclear weapons – but they do believe a route to controlling those weapons may now be open.

He wrote recently that North Korea had indeed stopped testing: "North Korea did not test-launch missiles of any range in 2018 — a dramatic turnaround from the flurry of tests during the prior few years. In May, Kim also took steps to destroy the nuclear testing tunnels at North Korea’s Punggye-ri test site.

"The reality is that permanently ending nuclear and missile testing seriously limits North Korea’s advances in weaponisation and delivery systems."

Mr Trump may have accepted, perhaps without realising it, that learning to live with a nuclear armed North Korea is the only real option other than permanent, dangerous confrontation.

And Mr Kim may have accepted the only way to keep power is to let the economy grow, and that means getting in outside investment.

But can he let in money without also letting in dangerous ideas about freedom.

Both Mr Trump and Mr Kim may yet get the Nobel Prize for Peace.

Might they one day be the first Nobel Peace Laureates to end up in prison – Mr Trump if the investigators close in and Mr Kim for well documented crimes against his own people.

Steve Evans is a reporter for The Canberra Times and a former BBC correspondent in Korea.