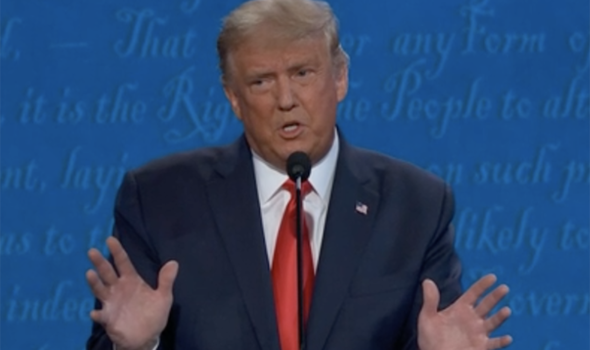 Mr Trump and Mr Biden faced off for the final presidential debate tonight in Nashville, Tennessee ahead of the November 3 election. Moderator Christine Welker asked the President to respond to the Democrat’s comments on foreign interference in the upcoming election, where Mr Trump launched an attack on Mr Biden about his alleged links to Russia. Mr Biden has denied accepting any money from foreign powers, and attacked the president over allegedly paying more tax to China than the US.

Mr Trump then added John Ratcliffe, US director of national intelligence, had already told him about Iran and Russia’s attempts to interfere in the election, claiming its because he is tough on them.

Mr Trump, quoting Mr Ratcliffe, said: “’The one thing that is common to both of them: They both want you to lose.’”

He then added: “Because there is nobody tougher to Russia than me, because of the sanctions.”

The President then said he made NATO commit up to $120 billion to “guard against Russia”, and told Mr Biden: “While he was selling pillows and sheets, I was selling tank-busters to Ukraine.” 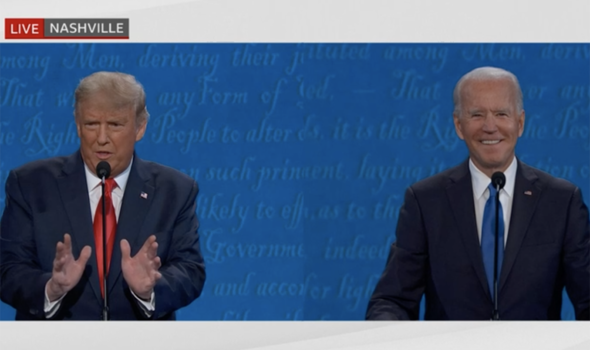 Mr Trump then brought up the Hunter scandal, and called on his democrat rival to admit wrongdoing.

He said: “The emails, they’re horrible emails of the kind of money that you were raking in, you and your family.

“And Joe you were vice president when some of this was happening and it should never have happened, and I think you owe an explanation to the American people. (…)

“I think you can clean it up right now, and be straight with the American people.”

Mr Biden replied: “I have not taken a penny from any foreign source in my life.”